Meeting Sambath. “She’s a woman, but works like a man,” the Tearfund worker said–keeping her family going, growing watermelons and rice on  unused strips of land she rents from neighbours who work in Phomh-Penh’s garment factories.

I watched her give a bag of fresh grown rice (which I had never seen before!) to the Tearfund worker, refuse payment, but say, “If you like it, in future, don’t buy from the market, buy from me,” and photographed the conversation, three Asian women all comfortably squatting on the ground, in a way I am now too stiff to contemplate, companionably talking, keeping their clothes clean.

Sambath invited us to her house: a trek down narrow dirt paths to a house built on stilts (because waters rise in the rainy season and there are floods).

I loved being there, following the flock of chicks around, looking at the eggs and the brooding hens. 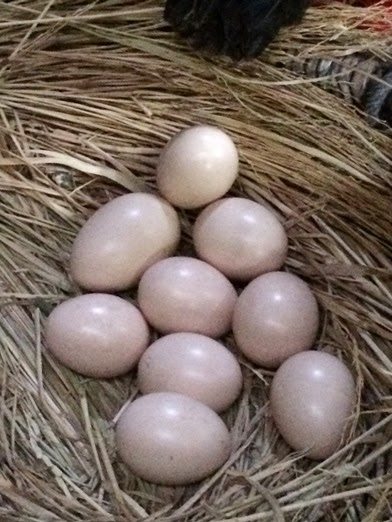 Cambodians are possibly the slimmest, lithest people in the world. Most women seemed to weigh less than 100 pounds, men too! We clambered onto a lengthy makeshift bridge made of palm trees cut in half to floating platforms: picnic spots.   I tried, but felt anxious at the thought of falling in the dirty water of Tonle Batie Lake to the accompaniment of the laughter of the picnicking Cambodians (whose default reaction to anything out of the ordinary is to laugh). 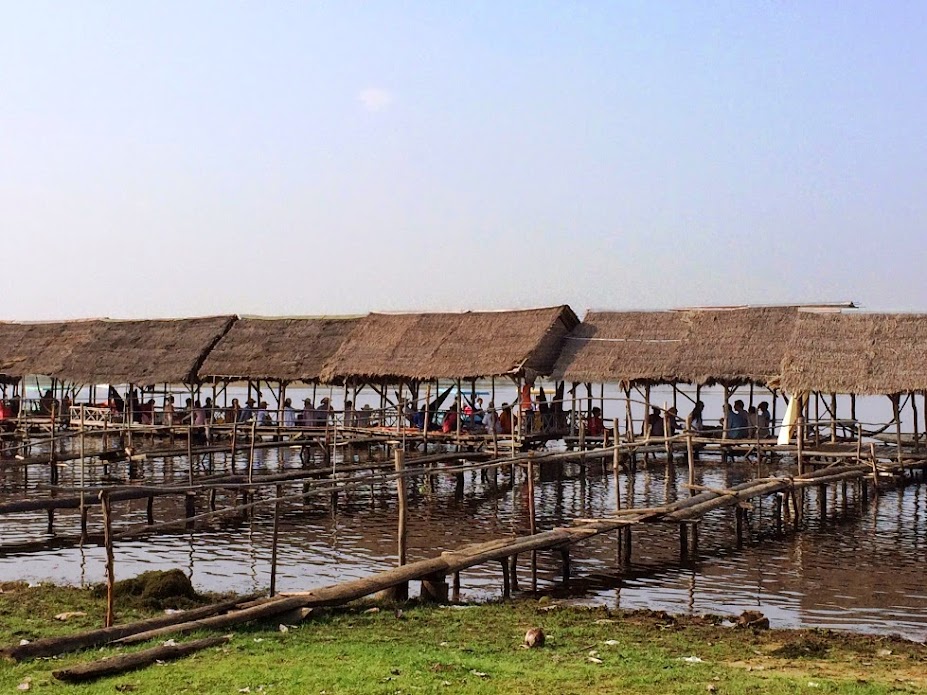 And so I sat on the steps facing the lake, with a 21 year old Cambodian Tearfund volunteer, and chatted in English. He told me about his dream of owning a rice factory and how he was saving for it. It cost USD $8000, he reckoned. He asked me several times to pray that he’d achieve his dream.

I simply could not see how this sweet young man could compete in business in a corrupt country, in which rice, the staple food, is probably controlled by conglomerates; however, my husband and I are dreamy unworldly people and we have managed to run a successful small business. God gave and continues to give me the ideas I need, step by step, and there is no reason that he would not give them to M.

That was another magic moment for me, sitting there, facing Tonle Batie Lake, swapping life stories and sharing precious dreams across a divide of race, gender, decades, culture, and profession, human sympathy a bridge, like the bridges to the floating shelters.

Cruising at sunset down the Mekong on fire, totally a magic moment. 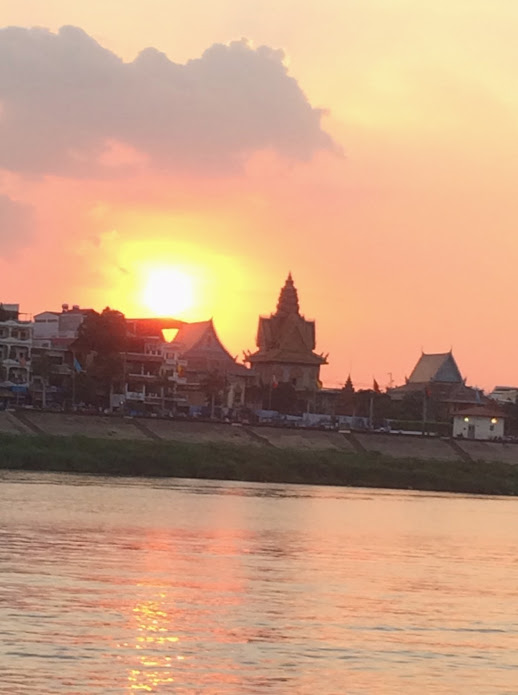 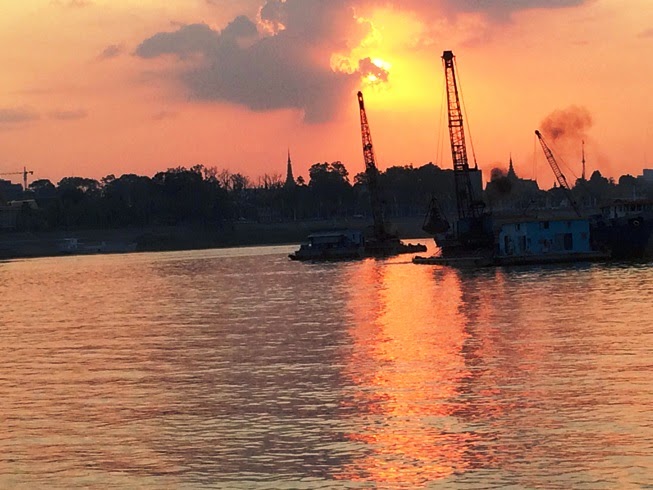 Ta Promh, an atmospheric ruined 12th century temple in Tonle Batie, fascinating, a bit like the spooky ruined Greek temples I saw in Greece—and, oddly, in Sicily too. 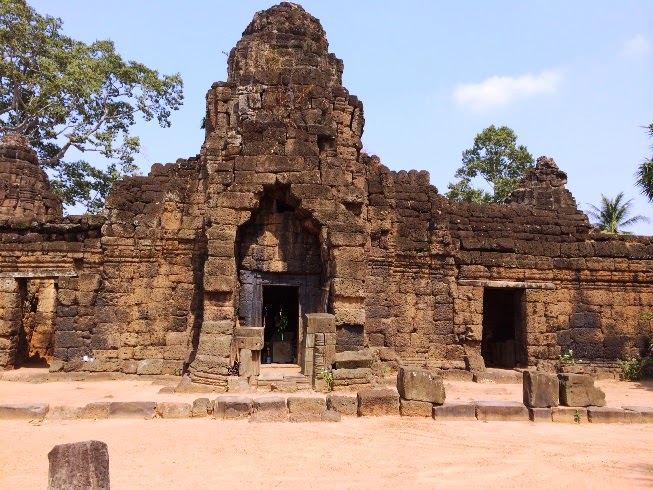 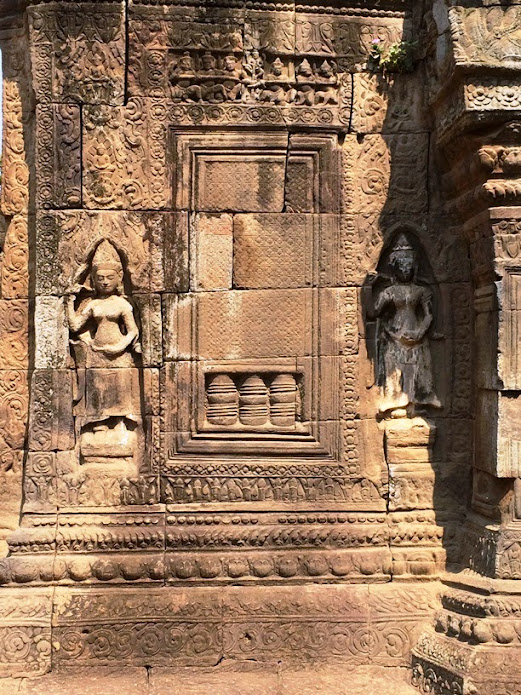 A day in Bangkok on the way, visiting an impossibly over-decorated Buddhist temple. 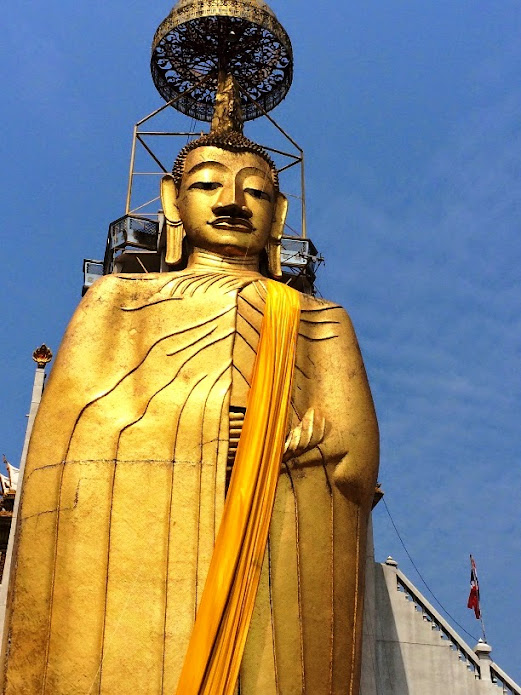 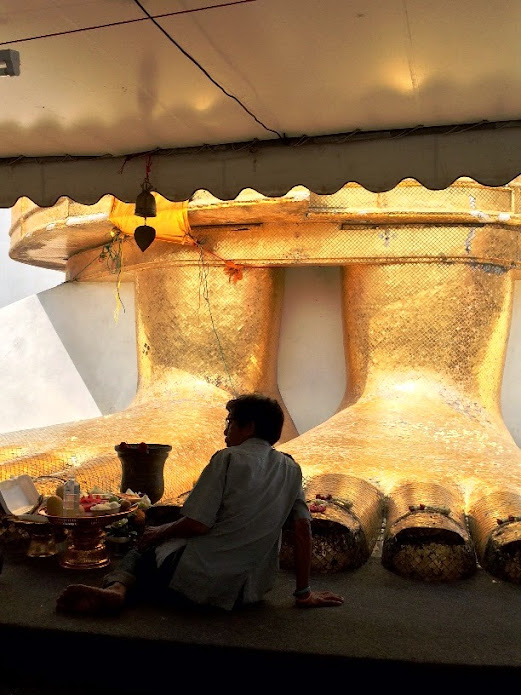 Buddha and his feet 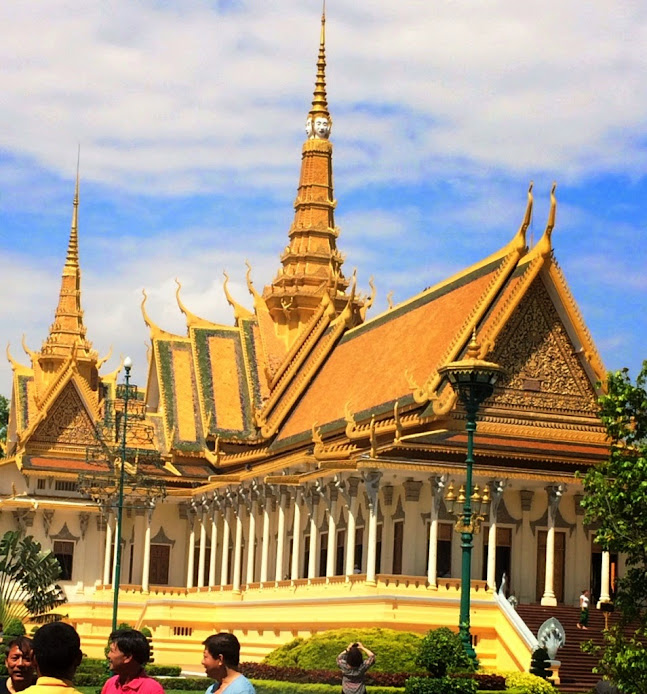 The Cambodians themselves, especially the smiley helpful Tearfund workers. I loved Kagne, the Tearfund worker who accompanied us. Cambodians have a natural restraint and dignity and effortless good manners and courtesy I found very attractive and winsome. 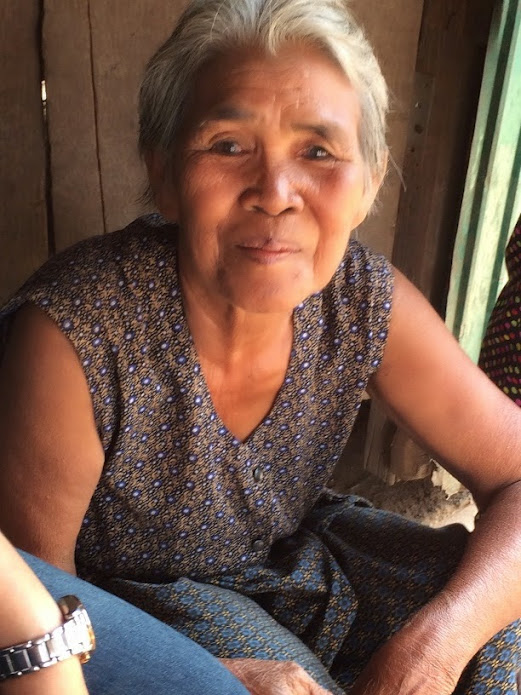 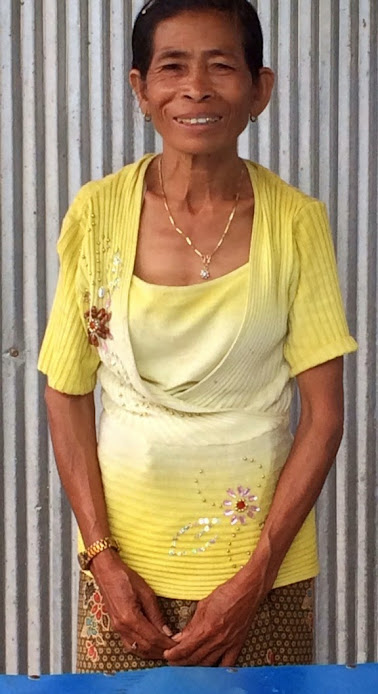 Attempting to dig a field with a bunch of Christian Cambodians. Discovering that I lack all talent for digging. 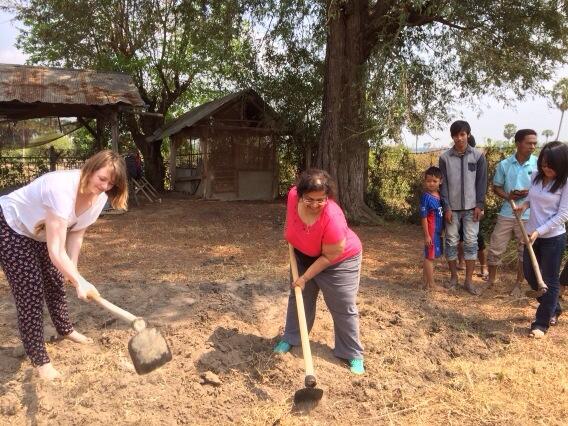 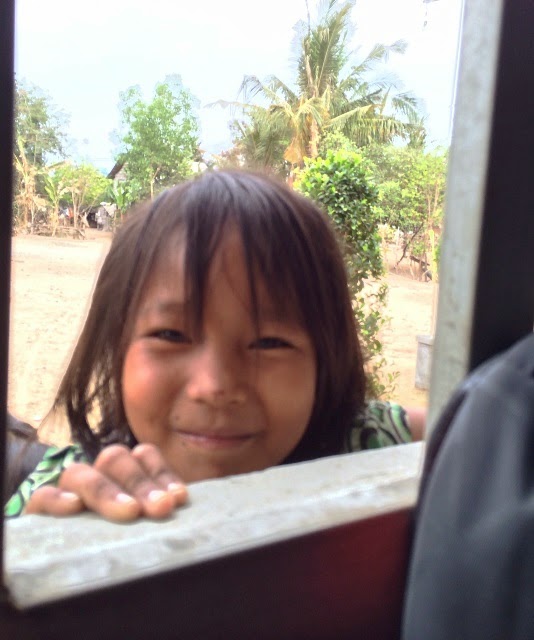 I enjoyed (and was a bit amused by) the Tonle Batie Church, church in an agrarian economy, most unlike mine, St. Andrew’s, Oxford. There was a community pig. Flock of community chickens wandered around. Chillis , tomatoes and peppers were grown on spare bits of land. English lessons took place in the church hall, and the worship was rousing and charismatic! 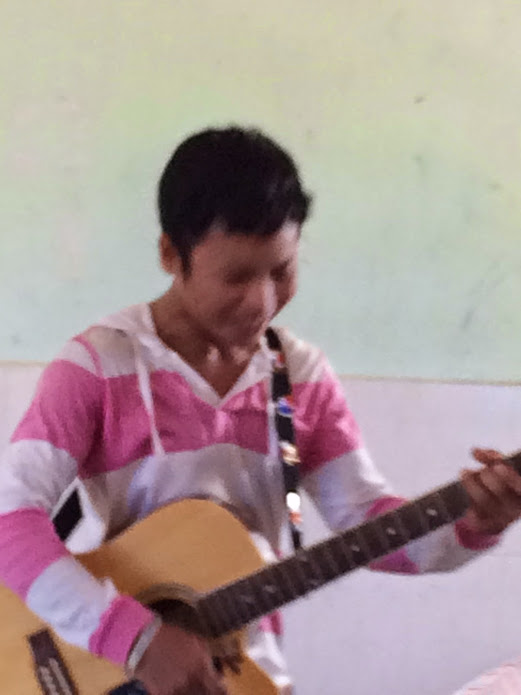 Here is a section of my piece for Christian Today.

“Blogging for Tearfund in Cambodia was an honour – which I mean quite literally.

I felt honoured to enter Cambodian homes, and step over the threshold into their lives. I felt honoured to meet people who with great dignity, resilience and self-reliance earn their living by gathering wood from the forest, trapping fish in Tonle Batie Lake, raising pigs and growing their own rice.

I like Tearfund’s Umoja model of development, particularly asking people their dreams. Being asked to dream introduces hope and possibility into a life. Umoja then encourages people to look at resources they do have; apparently most begin by saying they do not have any.

Encouraged to think outside the box, Mechyan, an elderly HIV positive widow who lived on church land, grew chillies and basil in old mesh rice bags and made powder to sell from the nutritious moringa trees growing wild on the property.

Vanny created a worm farm from cow dung to feed his chickens and aerate his vegetable garden and Yiv Toch taught others how to raise chickens. It’s the parable of the talents in action: use the little you have to gain more.

As an Umoja facilitator told us, Jesus did feed 5,000, but he took people’s five loaves and two fish to do it with. Their very own Umoja project!

I feel my heart, mind and imagination have been stretched by meeting people from a different culture, who make their living in difficult circumstances, in a country without welfare or a social safety net, but with great optimism, cheerfulness and diligence.

When I hit roadblocks which frustrate me, I will remember the Cambodian Tearfund office workers who bought us dongles to help our laptops work anywhere in Cambodia. They worked on configuring the unfamiliar laptops for well over an hour till each of them worked with the dongles, (a task which frustrates us whenever we travel) and similarly worked with our latest model iPhones until they got Cambodian SIMs to work in them, cutting the SIMs down to size, doggedly persisting until they were successful.

How easily I permit technology and the unfamiliar to baffle me, and how much can be accomplished by the calm persistence, confidence and self-reliance I saw everywhere in Cambodia.”

Okay, it was my first attempt at raising funds for a good cause—though it will not be my last.

Sadly, we haven’t reached our fund-raising goal. Our target was to raise 60 new supporters for Tearfund who would commit to giving £3 a month. This money will go towards encouraging self-sufficiency in Cambodia through the Umoja project. We’ve reached 48.

Will you be one of the those 12 people? If you would like to support Tearfund here, (sign up on the top left-hand corner), I would like to offer you a gift.

Let me know when you have done so by emailing me at anitaATanitamathiasDOTcom and I will send you the ebook of my four books, AND…

Wandering Between Two Worlds: Essays in Faith and Art traces my life, my struggles, and the evolution of my faith in essays. It deals with dichotomies—East and West, Writing and Prayer, Domesticities and Art, Roots and Wings, along with my conversion narrative and an account of working with Mother Teresa.

which has sold the best of all my books, is a children’s book, dealing with art, Florence, The Renaissance, beauty, good-heartedness, weakness, and the importance of forgiving oneself.

The Meek Shall Inherit the Earth is a reflection on that Beatitude, theological writing for everywoman.

The Church That Had Too Much is an odd book, the record of a dream; I found myself writing it in the shape and rhythms of poetry.

AND a fifth one shall be sent to you when it is finished…a free e-book of my newest book, still in process “A Handbook of Christian Writing.” It is both practical and spiritual!