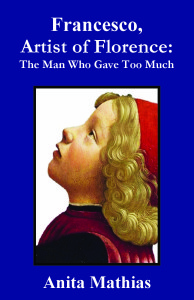 Francesco, Artist of Florence:
The Man Who Gave Too Much
(On Amazon.com, on Amazon.co.uk)

In this lavishly illustrated book by Anita Mathias, Francesco, artist of Florence, creates magic in pietre dure, inlaying precious stones in marble in life-like “paintings.”
While he works, placing lapis lazuli birds on clocks, and jade dragonflies on vases, he is purely happy.
However, he must sell his art to support his family.
Francesco, who is incorrigibly soft-hearted, cannot stand up to his haggling customers.
He ends up almost giving away an exquisite jewellery box to Signora Farnese’s bambina, who stands, captivated, gazing at a jade parrot nibbling a cherry. Signora Stallardi uses her daughter’s wedding to cajole him into discounting his rainbowed marriage chest. His old friend Girolamo bullies him into letting him have the opulent table he hoped to sell to the Medici almost at cost.
Carrara is raising the price of marble; the price of gems keeps rising.  His wife is in despair.
Francesco fears ruin.

Sitting in the church of Santa Maria Novella at Mass, very worried, Francesco hears the words of Christ. The lilies of the field and the birds of the air do not worry, yet their Heavenly Father looks after them. As He will look after us.
He resolves not to worry.
And as he repeats the prayer the Saviour taught us, Francesco resolves to forgive the friends and neighbours who repeatedly put their own interests above his.
But can he forgive himself for his own weakness, as he waits for the eternal city of gold whose walls are made of jasper, whose gates are made of pearls, and whose foundations are sapphire, emerald, ruby and amethyst? There time and money shall be no more, the lion shall live with the lamb, and we shall dwell trustfully together.
Francesco leaves Santa Maria Novella, resolving to trust the One who told him to live like the lilies and the birds, deciding to forgive those who haggled him into bad bargains–while making a little resolution for the future.

In these wide-ranging lyrical essays, Anita Mathias writes, in lush, lovely prose, of her naughty Catholic childhood in Jamshedpur, India; her large, eccentric family in Mangalore, a sea-coast town converted by the Portuguese in the sixteenth century; her rebellion and atheism as a teenager in her Himalayan boarding school, run by German missionary nuns, St. Mary’s Convent, Nainital; and her abrupt religious conversion after which she entered Mother Teresa’s convent in Calcutta as a novice. Later rich, elegant essays explore the dualities of her life as a writer, mother, and Christian in the United States– Domesticity and Art, Writing and Prayer, and the experience of being “an alien and stranger” as an immigrant in America, sensing the need for roots. 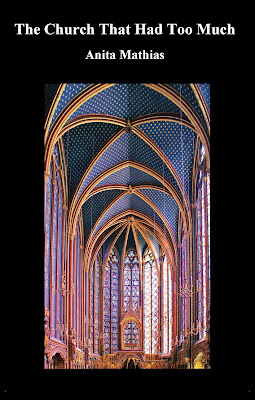 The Church That Had Too Much was very well-intentioned.  She wanted to love God, she wanted to love people, but she was both hampered by her muchness and the abundance of her possessions, and beset by ambition, power struggles and snobbery.
Read about the surprising way The Church That Had Too Much began to resolve her problems in this deceptively simple and enchanting fable. 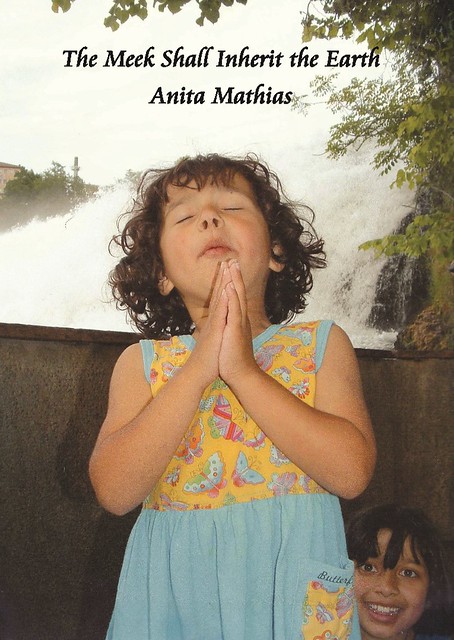 “Blessed are the meek, for they shall inherit the earth,” Jesus says in his most puzzling Beatitude.

Puzzling, because, if we are honest, it does not feel true to our experience.

So do the meek inherit the earth? Is this true? Or isn’t it?

In The Meek Shall Inherit the Earth, an extended meditation on the power of gentleness, Anita Mathias grapples with this mystifying Beatitude.