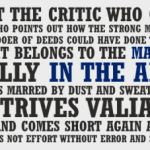 Our family was discussing a writer who has done paradigm-breaking innovative work.

“Is she a Christian?” my daughter Irene asked.

“Hmm… Someone who goes to church, more or less respects Jesus and the Bible, but who does not see the existence of God, and the coming of Christ as the central axis on which their life spins.”

Irene: “Are you a Christian with a small c or a big C?”

Me, “Oh, I am hopelessly Christian. Christian with a Big C.”

Zoe adds, “Except you do not go to church.”

This is slander, dear readers; I do go to church. But these splendid summer days often find me exhausted by 5.30 p.m. when it’s time to leave to church, and so I, on occasion, worship God by a long solitary walk through the fields around our house, or a nap, or gardening, or even quietly praying in the empty house.

Having grown up Catholic, there is glorious freedom in being able to skip church without guilt. I, however, truly believe in the value of Christian fellowship and in belonging to an excellent church; I frequently come back from services at our church, St. Andrew’s, Oxford, with peace in my heart, and a smile on my lips. However, a key life verse since my twenties has been “In repentance and in rest, you shall be saved. In quietness and in confidence shall be your strength”(Is 30:15). So when I am tired, I try not to push, not even spiritually.

We talked about the writer’s brilliant book, Daring Greatly which I loved. It is about understanding and developing the self, and about bravery. Saying it’s about being your best self sounds too pop-culturish, but that’s one way of summarizing it. It is an excellent book, just not a Christian book, particularly: it isn’t one that Jesus would have written. Jesus would have said that we find our best selves in losing ourselves, in serving, in washing feet.

Oh Jesus! You do complicate a girl’s life, don’t you? I would be Christian with a small c if I could, but you have stretched my mind and spirit to a new dimension, and so I have to follow you, slow step by step.

A friend of mine who is a social worker was telling me about a woman she worked with, a Kenyan, who had fled a physically abusive marriage to a safe house in Oxford. She had twins: a nine year old daughter, wheel-chair bound with cerebral palsy, and a son who had a physical or psychosomatic eating disorder, which made him grossly obese. The mother herself had continuous, splitting headaches with all the stress.

It transpired that the woman knew no one in the estate in which she was housed. “All she needs is a friend,” my friend said, almost in tears. “Just one friend. It’s not too much to ask, is it?”

But in a world, in which friendship has currency—“What do you have to offer me?—Are you cool, rich, clever, connected, highly-educated, beautiful, successful, lovely?”—what does this woman have to offer? Nothing.

She would have one need after another; anyone could see that immediately. I befriended a Zimbabawean, abandoned by her husband a year or so ago when she cleaned for me, and her needs were bottomless. I gave her my toaster, my computer (and upgraded), stuff from my house, stored her stuff after evictions (it’s still in my garage), got her other cleaning jobs, but there were more needs, and more.  She constantly wanted to borrow money (which I did not lend, because that just gets people even deeper into debt). Helping someone whose needs are unlimited is very tiring and draining–and thankless, but eventually one needs to draw the line, and sometimes the last No rankles more than all the previous Yeses. I understand why this desperate woman, who had so little to offer, could not find a single friend.

I can only think of one place. The beautiful, broken, yet unbowed church of Jesus Christ.

A place where people talk to strangers. Where you can appeal to the Vicar, and if he can help or connect you, a good one will. Where there might be a safety net of ministries for such as her, or means to connect her to them. Where there are befriending ministries, and prayer ministries, where people will spend time with you and ask nothing in return.

I am pausing now to pray for this lady, whose name I do not know. She told my friend she did not go to church, unlike many from her nation. May she meet some on-fire African who might invite her to church.

“The local Church is the hope of the world,” Bill Hybels said, in an often-quoted epigram.

He’s right. Nowhere else can we relax so quickly, and so deeply with people so different from us.