I walked last night on Port Meadow. An extraordinary experience! The blazing ball of sun slowly floated into the Thames, colouring it crimson.

An amazing natural event I have too often missed! Spectacular beauty lavished on anyone who would take a few minutes to observe it.

Wild geese arrived honking, with a beating of wings, settling in to their night homes on the river. Seagulls flew overhead, dropping shells, having eaten the mussel.

There was perfect peace.

The sky stretched huge massive and endless over the flat expanse of Port Meadow. It reminded me of the Big Sky when we drove through Montana.

And I kept thinking:
The Heavens declare the glory of God
The firmament shows forth the work of his hands
Day after day they pour forth speech;
night after night they reveal knowledge.
They have no speech, they use no words;
Yet their voice goes out into all the earth,
their words to the ends of the world. (Psalm 19)

And here’s a poem by R. S. Thomas, about a similar experience

It was like a church to me.
I entered it on soft foot,
Breath held like a cap in the hand.
It was quiet.
What God there was made himself felt,
Not listened to, in clean colours
That brought a moistening of the eye,
In a movement of the wind over grass.

There were no prayers said. But stillness
Of the heart’s passions — that was praise
Enough; and the mind’s cession
Of its kingdom. I walked on,
Simple and poor, while the air crumbled
And broke on me generously as bread.

Roy and I have been to Kew Gardens every week this spring. I am learning to run, and it’s a lovely place to jog, through the azalea and camellia and rhododendron, and fields of bluebells and crocus and fritillary. Our walks are usually 4 miles, but you just don’t realize how far you have done in this constantly changing panorama. Heaven, I believe, will have a little area reserved for Kew Gardens.

The rest of this blog and the images are from Roy.

Kew Gardens is a wonderful place to visit on good day.  (Even on a rainy day, there are the glass houses.)  Here are  few pictures from several visits this spring.

Some of the 30,000 fritillaries planted at Kew.

The square patches of color looking like scales and shape give the flower its name.

The Lucombe Oak, created by William Lucombe,  is a cross between the Turkey Oak and the Cork Oak.   It is a very vigorous cultivar and so highly prized. This tree was planted 20 meters away in 1773, then at the age of 73, it  was transplanted to its present location. (One of Kew’s botanical listed attractions.)

One of the hundreds of naturalised crocuses at Kew.

Scilla (or are they Chionodoxa?)

Temple of Aeolus on top of a daffodil covered hill in the Woodland Garden, Kew Gardens.

Kew has ponds and grassy areas that are welcoming to   birds.

A gathering of waterbirds. (The lady feeding them is off to the left.)

The wooded areas of Kew have some wonderful wild flowers and naturalised bulbs.

A mix of blue flowers and Queen Anne’s lace growing under a variety of species of oak.

The azalea and rhododendron walk has some huge rhododendrons completely covered in flower, as well as smaller specimens where you can appreciate the individual flowers.

We weren’t the only ones going out for a walk in the lovely spring weather.

The bay where St. Paul was shipwrecked, Malta. From our Christmas holiday there.

I am in Corfu on holiday, mainly walking on beaches and forests, and totally resetting my mind, body and most of all, spirit!!

I have excerpted two articles I read recently on the healing, restorative powers of nature on both brain and body

How Nature Resets our Minds and Bodies (The Atlantic) : According to this interesting article in the Atlantic, “nature restores mental functioning in the same way that food and water restore bodies.

Psychologists studying attention restoration theory, or ART, say that unlike draining urban environments, forests, streams, rivers, lakes, and oceans demand very little from us, though they’re still engaging, ever changing, and attention-grabbing. They give us the chance to think as much or as little as we’d like, and the opportunity to replenish exhausted mental resources.

Healers in Japan and Germany have long heralded the benefits of natural therapy, recognizing that humankind has spent 99.99 percent of its history living in natural environments. People who are exposed to natural scenes aren’t just happier or more comfortable; the very building blocks of their physiological well-being also respond positively to natural therapy.

Natural environments promote calmness and well-being in part because they expose people to low levels of stimulation.   Interesting locations, including busy natural environments, are so beneficial that physicians have begun to suggest that they might offer a cheap and effective way to lessen the effects of certain cancers.  Nature is an inexpensive and effective tool for dulling the impact of illness, and the intrusion of everyday stress.”

“Scientists known for some time that the human brain’s ability to stay calm and focused is limited and can be overwhelmed by the constant noise and hectic, jangling demands of modern life, sometimes resulting in a condition informally known as brain fatigue.

With brain fatigue, you are easily distracted, forgetful and mentally flighty.

But an innovative new study from Scotland suggests that you can ease brain fatigue simply by strolling through a leafy park.

The idea that visiting green spaces like parks or tree-filled plazas lessens stress and improves concentration is not new. Researchers have long theorized that green spaces are calming, requiring less of our so-called directed mental attention than busy, urban streets do. Instead, natural settings invoke “soft fascination,” a beguiling term for quiet contemplation, during which directed attention is barely called upon and the brain can reset those overstretched resources and reduce mental fatigue.

Previous studies have found that people who live near trees and parks have lower levels of cortisol, a stress hormone, in their saliva than those who live primarily amid concrete, and that children with attention deficits tend to concentrate and perform better on cognitive tests after walking through parks or arboretums.

The use of portable EEGs   confirmed the idea that green spaces lessen brain fatigue.

Jenny Roe, a lecturer at Heriot-Watt’s School of the Built Environment, who oversaw the study said “Natural environments still engage the brain,  but the attention demanded is effortless. It’s called involuntary attention in psychology. It holds our attention while at the same time allowing scope for reflection,”

The study suggests that you should consider “taking a break from work,” Dr. Roe said, and “going for a walk in a green space or just sitting, or even viewing green spaces from your office window.” This is not unproductive lollygagging, Dr. Roe helpfully assured us. “It is likely to have a restorative effect and help with attention fatigue and stress recovery.” 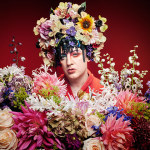 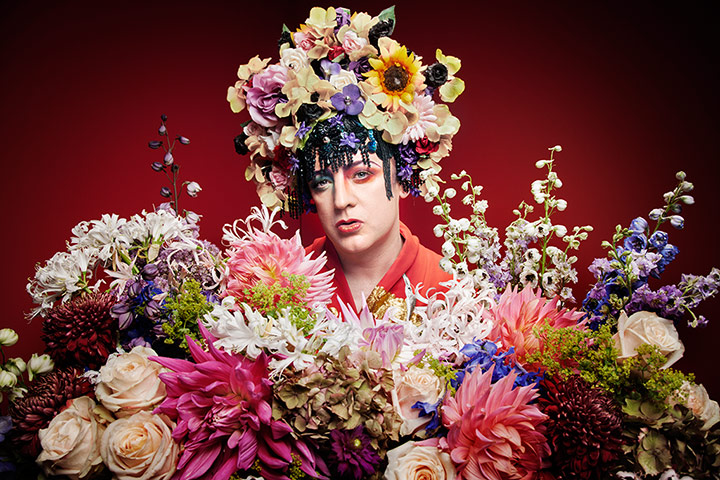 I wished for death often,

But now that I am at its door

I have changed my mind about the world.

It should go on; it is beautiful,

even as a dream, filled with water and seed,

ships and buildings and messages

if ever I have seen one.

In the next world, should I remember this one,

I will praise it,

I enjoyed walking today by Ramla Bay in Malta, supposed to be one of the best beaches in the Mediterranean. Oh abundance!–jellyfish on the beach, shells, and a scatter of brilliant marble-like pebbles, which, with a few swishes in a rock tumbler, would reveal their sleek preciousness.

Pebbles left by the retreating waves.

END_OF_DOCUMENT_TOKEN_TO_BE_REPLACED 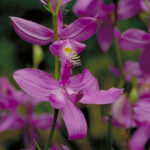 Romans 1:18 The wrath of God is being revealed from heaven against all the godlessness and wickedness of people, who suppress the truth by their wickedness, 19 since what may be known about God is plain to them, because God has made it plain to them.
20 For since the creation of the world God’s invisible qualities—his eternal power and divine nature—have been clearly seen, being understood from what has been made, so that people are without excuse.
What may be known about God from nature? What is plain?
That God is a God
* of order.
* Of economy–in brilliant ecosystems in which everything is recycled and nothing is wasted. God values efficiency it seems, everything has its purpose.
* who loves beauty
* who is creative
* whose goodness is extravagant–orchids which no eye ever sees
* who works for the joy of work, creating animals, insects, plants, stars, which will never be seen except by himself
* whose generosity is built into creation–in general, one reaps more than one sows, a multitude of fruit from a single apple or tomato seed.
* whose love is built into creation, in the parent-love most living creatures have for their offspring (and the longing to/for a mate).  All living creatures are made to serve and be served, (to love and be loved–to take it a bit further). Everything is alive because of food and sustenance provided by other plants and animals, and they and their body, and life and endeavours will in turn provide food and sustenance for others.
* who has made variety in his creations, and treasures human variety too
* who is both fierce and gentle–Lord of hurricanes and earthquake and gentle winds
* That life contains light and darkness, winter and summer, rain and sunshine, abundance in summer and autumn, paucity in winter. As there is no reason to doubt the return of spring in winter, or dawn in the middle of the night, there is no reason to doubt God’s goodness in times of sadness or reverses. One might even say that times of both plenty and paucity are encoded into creation.
* creation rewards diligence-the planting and tending of seeds 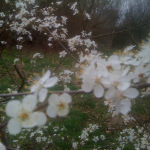 Luther famously was asked what he would do if he knew the world would end on the next day. Looking out of his window at the apples trees in bloom, he replied, “I would go plant a tree.”


Sensible man. We’ve just planted 10-15 fruit trees in the five years we’ve lived here–are planning to plant many more this year!!–but how glad we are that we planted those we did.


And here’s a poem from A. E. Housman, “And since to look at things in bloom, fifty springs are little room, about the woodlands I will go, to see the cherry hung with snow.”