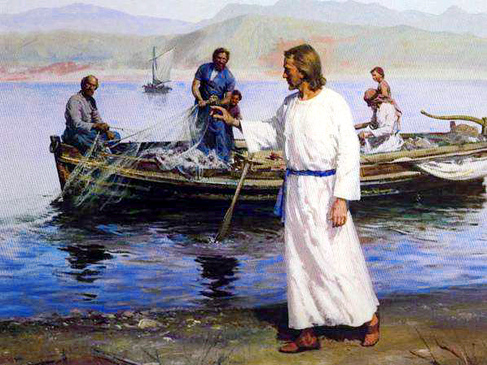 As Jesus was walking beside the Sea of Galilee, he saw two brothers, Simon called Peter and his brother Andrew. They were casting a net into the lake, for they were fishermen.  “Come, follow me,” Jesus said, “and I will make you fishers of men.” At once they left their nets and followed him. (Matthew 4 18-20)

So the fishers of fish become halieis anthropon, ἁλιεῖς ἀνθρώπων, fishers of men. The will of God always leads us to a larger place, to an enlarged territory.

Because God’s desire is always for the fullest human flourishing. “The glory of God is man fully alive,” a lovely line credited to St. Irenaeus

And once we have surrendered our lives to him, he keeps moving us, onward and upward to the place where we can both use all our gifts and be a blessing to others. And in general, he takes the moving car of who we are; our gifts, abilities and experience, and steers it higher, stronger, faster.

So Jesus takes physically strong, entrepreneurial fisherman inured to hard work, team work, hardship, disappointment, nights at sea, and gives them the task of fishing men into an eternal kingdom. He applies their natural gifts to eternal, supernatural purposes.

Of course, just as we don’t give our children just one birthday present, once in their lives, so God continually gives us new gifts, abilities, capabilities, insight and new wisdom. But the vocation to which he calls us will be true to who we are, and to our interests and gifts.

In the short run, however, Peter and Andrew, James and John became downwardly mobile. No longer independent businessmen, but vagabonds, with no place to rest their head, dependent on charity.

Their old selves had to be broken, to be reformed like a beautiful mosaic.

John Wimber, founder of the Vineyard Movement, flourished in the music industry. However, on becoming a Christian, he found it incompatible with discipleship. So he left, and found work in a factory. An old colleague came to see him, asking for John Wimber’s office. He found Wimber covered with oil, inside a oil-barrel he was scrubbing out. The musician thought Wimber had gone mad!! (Recounted by Carol Wimber in The Way it Was.)

It required this brokenness for Wimber to be willing to hear when God said, “John, I have seen your work. Now let me show you mine.” And to be open to going with the flow of God’s  eccentric purposes.

And later to be a willing instrument when the Holy Spirit songs kept coming, no longer pop songs popular for a year, but spirit-given songs sung for decades, or longer.

However, it takes a period of brokenness and withdrawal for a gift to be repurposed, for fishermen to become fishers of men.

He needs our surrender before He can use us to bless others.

I was blocked in 2006 when a literary agent wanted me to make changes in my manuscript. Words dripped like crystallising treacle; I was blocked.

So I took a break, decided to put the kids in private school, founded a small publishing company to pay for that. When Roy could come aboard full time in 2010, and I could “retire,” I felt I no longer knew how to write. I had barely read for 4 years. I had lost writerly confidence.

When I started again, after hearing God suggest blogging, my writing was different. I was singing a new song.

I was more interested in speaking to my readers and blessing them than in a career (though, of course, I still want one) I was more interested in what I said, than in how I said it, which was huge for the girl who had been enamoured with style. I desperate to cut perfectionism off at the neck, and just get my work out there. Ship it! I was writing for the health of my soul, and as an offered gift to my readers, rather than for the glory of a career.

It takes a period of brokenness for the Great Artist to put your gifts together into a glorious mosaic, all hammered gold and gold enamelling, all tesserae and shimmering glass.

When I first wanted to offer my life to God, I went off to work with Mother Teresa, aged 17. (Having skipped years at school, winning “double promotions,” I was done with Grade 12 by the time I was 16.) I assumed because Jesus said, “Whatever you have done to the least of these…” that surely God’s will for me, and for every Christian was to work with the poor!

However, I am a dreamy and impractical person, and if I were a medieval woman when this was a plausible career choice, I would have become a mystic!

I was no good at Mother Teresa’s, with its packed-like-sardines community life; loud constant, vocal prayer, and lots of practical work. I languished and wilted; I got all sorts of things wrong; life felt like a series of hammer blows to my heart.

But writing–I have always written easily and reasonably well. It has generally been my joy.

Can writing be the way I am to serve God? Can writing be my worship? For years, I didn’t really believe something so lovely could be true

“The place God calls you to is the place where your deep gladness and the world’s deep hunger meet.” (Frederick, Buechner, Wishful Thinking)

“Child, you have written for ambition,” he says. “Come write for me, as your worship of me.