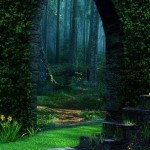 As I was drifting off to sleep last night, I murmured, “I believe in the resurrection.”

I was thinking of this passage I had recently read in Diarmaid MacCulloch’s magisterial, A History of Christianity.

Christianity is, at root, a personality cult. Its central message is the story of a person, Jesus, whom Christians believe is the Christ (from a Greek word, meaning Anointed One): the God who was, is and ever shall be, yet who is at the same time a human being, set in historic time.

Christians believe that they can still meet this human being in a fashion comparable to the experience of the disciples who walked with him in Galilee, and saw him die on the cross. They are convinced that this meeting transforms lives—as has been evident in the experiences of other Christians across the centuries.

For me, that’s the ultimate proof of the resurrection—that Jesus is as real to me as anyone I know. Realer, perhaps, because I feel I know him better than most people I know.

The pastor of my old church, Williamsburg Community Chapel, Virginia, Bill Warrick, said he asked a Young Life mentee, “If you could speak to Jesus, and be answered, would you believe?” The young man replied (this was the American South), “Oh yes, Sir, that would be the ultimate extra-terrestrial experience!”

Indeed, prayer, asking Jesus how to do things–whether it’s home-managing suff, or business stuff, or writing, or blogging, or even Twitter!!—and receiving surprising and brilliant answers…yes, that’s the ultimate extra-terrestrial experience.

American Bible teacher Beth Moore was asked, “How do you know that Christ is real?” She replied, “If he wasn’t, then I must be crazy, because I talk to him all the time, and he answers.”

It’s one proof, to me, that Christ is real and alive. I feel I can ask him questions, and get an answer.

I can ask him how to do things, or what to do, and clarity comes, and, often, insight and a Gordian-knot-cutting to the heart of the problem, that comes from beyond myself, from beyond my radar, my intelligence, or the way I normally think.

Of course, if researchers track creative people who meditate, they might come across similar answers surfacing from the unconscious. Whole mathematical careers, for instance, Ramanujan’s, have been built on these heuristic insights. (Interestingly, Ramanujan claimed he received his mathematical insights in prayer and meditation).

What is more amazing, perhaps, is when prayer changes things outside yourself—other people’s hearts; external events; the acceleration of a career; how co-incidences accumulate when one prays, Berlin walls topple, glasnost occurs, in our lives and in the world.

Ultimately, I believe in the resurrection because to me Christ is so real that I can often “see” him with the eyes of faith. Because, on request, he can turn my moods around, and fill my heart with joy.

Because he answers my prayers, in the micro-level of my mind, heart and spirit, and on the macro-level by orchestrating events which I am powerless to.

I believe in the resurrection because I have experienced Jesus, and He has changed the deep structure of my mind, heart and spirit on a molecular level, as he changed water to wine; fed 5000 with 5 loaves; made water as solid as earth and walked on it; and resurrected the dead body of Lazarus—and then his own.