Indeed, if we consider the unblushing promises of reward and the staggering nature of the rewards promised in the Gospels, it would seem that Our Lord finds our desires not too strong, but too weak.  We are half-hearted creatures, fooling about with drink and sex and ambition when infinite joy is offered us, like an ignorant child who wants to go on making mud pies in a slum because he cannot imagine what is meant by an offer of a holiday at the sea.  We are far too easily pleased.
C.S. Lewis, The Weight of Glory


As I blogged yesterday, I have decided to record one thing which makes me happy every day, with an image, when possible. 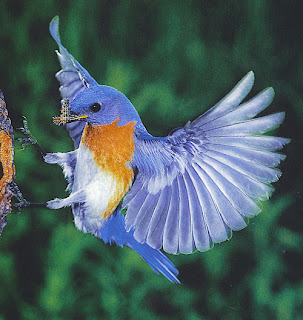 The Eastern bluebirds I used to see in my garden in Williamsburg, Virginia, surely among the most beautiful things on earth, their iridescent blue like mystical hints of a world beyond ours.

“The bluebird is well named, for he wears a coat of the purest, richest, and most gorgeous blue on back, wings, and tail; no North American bird better deserves the name, for no other flashes before our admiring eyes so much brilliant blue. It has been said that he carries on his back the blue of heaven and the rich brown of the freshly turned earth on his breast; but who has ever seen the bluest sky as blue as the bluebird’s back?” (Arthur Cleveland Bent, The Birds of North America.)