Happy New Year!! May it be a year of blessing and happiness for all of us

My Christmas letter has morphed into a New Year’s letter–which is kind of how my year went!

January—I win an all-expense paid competition to go to … Cambodia with Tearfund.

Zoe gets an offer from Oxford University to read Theology. She worked in the Bridge in Gadsden, Alabama at the end of her gap year at the School of Ministry, Catch the Fire Toronto.

February—Family trip to France—Paris and the Loire Valley. Came back to find we had been burgled. Our car too and loads of stuff. A beautiful moment to discover that we had never got around to getting homeowner’s insurance!

April—I publish my first children’s book: Francesco, Artist of Florence: The Man who Gave Too Much

May—Still exhausted after Cambodia, so go on a retreat to shake it off to El Palmeral, Spain, a retreat centre run by charming Mike and Julie Jowett.

(In fact, I have aggressive cancer, not that easily shaken off by rest and retreats!)

August— Suddenly exhausted. I surprise Roy by continually murmuring, “I think I have cancer.” Take up running to feel better—but do not outrun cancer…

Irene goes to Poland and Germany on a school trip, and Zoe and Irene visit my mother in India.

Roy and I go to David’s Tent, a 72 hour worship festival. I’d like to go next year too. This prophecy I received was VERY significant for me, though it may seem heartbreakingly ironic in the light of the rest of year.

October—Nice trip to France at half-term.

Jake the Collie, who was once “obese,” (thanks vet!!), gets thinner and thinner, until he has to be carried downstairs, limps painfully, and we say a tearful goodbye. It was cancer. Not to be taken lightly

I am still tired. See doctor. Severe anemia. Colonoscopy. Visually, it looks like cancer, the endoscopist says. It quacks like cancer… 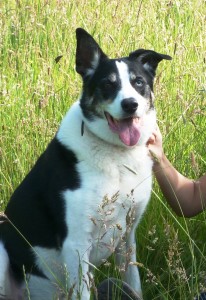 November— I am the runner-up for “Tweeter of the Year,” in the Christian New Media Awards, and attend a glamorous awards dinner in London.

Roy and I celebrate our 25th wedding anniversary.

Biopsy in. And it is…colon cancer! I have surgery on November 25.

Biopsy in again. Fresh horrors. 45% of the lymph nodes removed have tested positive for cancer. Chemotherapy is advised. I am envious of my friends who had cancer at the same stage, declined chemo and are alive to tell the tale.

I don’t have peace declining chemo, because to go by the three oncologists I’ve spoken to, and the medical papers I’ve read, taking chemo will dramatically reduce my odds of getting cancer again, and will increase my odds of 5 year survival. Also, if it returns it may be metastatic and virtually incurable. Horrors!

So I guess I am going to go ahead with chemo next month.

10-20% of people who take the chemo combination suggested for me do not have side-effects. If you’d like to pray for me, please pray that I am among them.

I am also learning about mega-nutrition via juices and smoothies to strengthen my immune system to withstand chemo, and vanquish cancer.

Some people come out stronger at the end of chemotherapy and cancer because they start exercising and eat beautifully, my friend Azmy, a GP tells me. God willing, I will be one of them.

Stephen Jay Gould writes in his beautiful essay on his cancer, “The Median is not the Message,” “Attitude clearly matters in fighting cancer. We don’t know why (from my old-style materialistic perspective, I suspect that mental states feed back upon the immune system). But match people with the same cancer for age, class, health, socioeconomic status, and, in general, those with positive attitudes, with a strong will and purpose for living, with commitment to struggle, with an active response to aiding their own treatment and not just a passive acceptance of anything doctors say, tend to live longer. A few months later I asked Sir Peter Medawar, my personal scientific guru and a Nobelist in immunology, what the best prescription for success against cancer might be. “A sanguine personality,” he replied.”

What a year! Dear God, I don’t want to hurt your pride, or show off or anything, but I think I could have done a better job editing it! But whey-hey, I am just in the middle of the story and I do not know how God is going to work it out.

Oh yes, I was going to be positive, wasn’t I? There is a message in the bottle of cancer, and, next year, I am going to decode it. In Oxford, England, on December 21, the winter solstice, we had 16 hours 18 minutes of darkness, but also had 7 hours 42 minutes of daylight. Always some brightness on the darkest day. Next year, I will be looking for it, and cultivating a joyful and grateful heart.

The whole earth IS full of his glory.