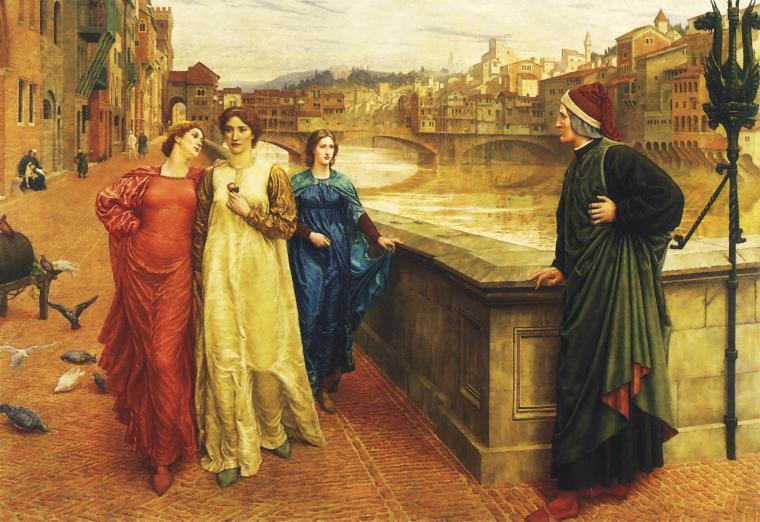 Here’s a striking story from The Emotionally Healthy Church by Pete Scazzero.

Rabbi Edwin Friedman tells the story of a man who had given much thought to what he wanted from life. After trying many things, succeeding at some and failing at others, he finally decided what he wanted.

Eager to take advantage of this open pathway, the man started on his journey. With each step, he moved faster and faster. Each time he thought about his goal, his heart beat quicker; and with each vision of what lay ahead, he found renewed vigour.

As he hurried along, he came to a bridge that crossed through the middle of a town. The bridge spanned high above a dangerous river.

After starting across the bridge, he noticed someone coming the opposite direction. The stranger seemed to be coming toward him to greet him. As the stranger grew closer, the man could discern that they didn’t know each other, but yet they looked amazingly similar. They were even dressed alike. The only difference was that the stranger had a rope wrapped many times around his waist. If stretched out, the rope would reach a length of perhaps thirty feet.

The stranger began to unwrap the rope as he walked. Just as the two men were about to meet, the stranger said, “Pardon me, would you be so kind as to hold the end of the rope for me?”
The man agreed without a thought, reached out, and took it.

“Thank you,” said the stranger. He then added, “Two hands now, and remember, hold tight.” At that point, the stranger jumped off the bridge.

The man on the bridge abruptly felt a strong pull from the now extended rope. He automatically held tight and was almost dragged over the side of the bridge.

“What are you trying to do?” he shouted to the stranger below.

This is ridiculous, the man thought. He began trying to haul the other man in. Yet it was just beyond his strength to bring the other back to safety.

Again he yelled over the edge, “Why did you do this?”

“But I cannot pull you up,” the man cried.

“I am your responsibility,” said the other.

“If you let go, I am lost,” repeated the stranger.

The man began to look around for help. No one was within sight.

He began to think about his predicament. Here he was eagerly pursuing a unique opportunity, and now he was being side-tracked for who knows how long.

Maybe I can tie the rope somewhere, he thought. He examined the bridge carefully, but there was no way to get rid of his new- found burden.

So he again yelled over the edge, “What do you want?”

“Just your help,” came the answer.

“How can I help? I cannot pull you in, and there is no place to tie the rope while I find someone else who could help you.”

“Just keep hanging on,” replied the dangling man. “That will be enough.”

Fearing that his arms could not hold out much longer, he tied the rope around his waist.
“Why did you do this?” he asked again. “Don’t you see what you have done? What possible purpose could you have in mind?”

“Just remember,” said the other, “my life is in your hands.”

Now the man was perplexed. He reasoned within himself, “If I let go, all my life I will know that I let this other man die. If I stay, I risk losing my momentum toward my own long-sought-after salvation. Either way this will haunt me forever.”

As time went by, still no one came. The man became keenly aware that it was almost too late to resume his journey. If he didn’t leave immediately, he wouldn’t arrive in time.

Finally, he devised a plan. “Listen,” he explained to the man hanging below, “I think I know how to save you.” He mapped out the idea. The stranger could climb back up by wrapping the rope around him. Loop by loop, the rope would become shorter.

But the dangling man had no interest in the idea.

“I don’t think I can hang on much longer,” warned the man on the bridge.

“You must try,” appealed the stranger. “If you fail, I die.”

Suddenly a new idea struck the man on the bridge. It was different and even alien to his normal way of thinking. “I want you to listen carefully,” he said, “because I mean what I am about to say.”

The dangling man indicated that he was listening.

“What do you mean?” the other asked, afraid.

“I mean, simply, it’s up to you. You decide which way this ends. I will become the counterweight. You do the pulling and bring yourself up. I will even tug some from here.”
He unwound the rope from around his waist and braced himself to be a counterweight. He was ready to help as soon as the dangling man began to act.

“You cannot mean what you say,” the other shrieked. “You would not be so selfish. I am your responsibility. What could be so important that you would let someone die? Do not do this to me.”

After a long pause, the man on the bridge uttered slowly, “I accept your choice.” In voicing those words, he freed his hands and continued his journey over the bridge.

Ironically, the closer you come to crossing the bridge to your dreams, the more people will appear jumping off the bridge, insisting that you and only you can save them from drowning.

While as Christians we are called to love our spouse, our children, and a few others, we only have two hands and finite time and strength, and so we need to be careful about which of the many ropes tossed to us we choose to hold. Which of the many calls on our time and compassion we answer. How many coffees we serve, cakes we make, meals we deliver.

Michael Hyatt writes brilliantly about this in a post called Success and Accessibility.

He writes, “The more successful you become, the more other people will demand of your time. As a result, if you are going to maintain margin for your most important priorities, you will have to make some difficult decisions about your accessibility.

He quotes Andy Stanley, who writes,

“The harsh reality is that the more successful we are, the less accessible we become. So then we are faced with the dilemma of who gets my time and who doesn’t, when do they get it, and and how much of it do they get.”

Hyatt continues, “Your time is a zero sum game. When you say yes to one thing, you are simultaneously saying no to something else. The more successful you get, the more difficult this becomes. You find yourself saying no to good things—worthy things—in order to say yes to your most important priorities.

After all, from the perspective of the one asking, it is not a big request. But to agree to their requests would require a major investment of my time. Add all the requests together, and I am soon eating into the time allotted for my own projects, friends, family, and health.

1. Acknowledge your resources are finite. This is a fact. You have 168 hours per week. No more, no less. Every time you commit to something, you are depleting your available time. Your other resources are also limited, including your attention, money, and energy.

If you ignore this, it will eventually catch up with you. You will pay a high price when that happens—perhaps an emotional breakdown, a divorce, wayward kids, a business failure, or a health crisis.

2.   Determine who needs access and who doesn’t. Not everyone needs full access to you. They may think they do, but they don’t. Therefore, you must prioritise your contacts and relationships.

Remember: once you let people in, it is hard to ask them to leave without creating misunderstanding or hurt feelings. Be intentional.”

“Hold the rope or I will drown.” The call comes to us from in many ways, and from many people.

Questions to ask: Will this person truly drown if I don’t hold the rope, or will they learn to swim? Will they drag me down, or will I pull them up? Is this person willing to change if I hold the rope, or do they want an audience for moaning and lamentation? Am I the only person who can hold the rope? Does God want me to hold the rope for this demanding person, or to cross the bridge to the destiny to which He has called me?

If you feel huge anger and resentment at this rope you’ve been tossed, if God has not called you to hold this rope as your unique call in life, Fail Quickly. Let go!

P.S. They will probably learn to swim, or find the next passer-by to fling their rope to.