Do you know anybody who lives off the grid? Well, now you do. I do. I live in a yurt, which is a kind of a wonderful round tent, on three acres of wooded Idaho mountainside, with no power and no running water.

Mine is a rich life, full of wild and beauty. It is a planted life, connected to our sloped bit of dirt and all the rhythms of nature. And it is a conscious life, each day revealing the true cost of human existence: what it truly takes to feed us, keep us warm and sheltered, clean.

But I’ll tell you what my life is not. It isn’t easy. Or secure. Or safe. Or glamorous.

Truth be told, I probably wouldn’t do it if something didn’t make me.

It’s too hard. And it’s too hard to justify! Keeping the kids out of school, bathing only once a week, living all in one room – the five of us! Also the cost to relationships, when I have to go to a friend’s house just to make a simple phone call, not to mention how it makes my friends feel that I openly and publicly reject the most basic principles of modern life.

Oh, that Esther, she’s a whole lot of fun to hang out with! Always talking about the cost of our extractive economy, irreversible environmental damage, the profound injustices built into the supply chain…

I can’t help it. I am driven by a ghost.

The ghost was my mother, and in her life I didn’t think much of her. It is the task of adolescent children to fail to take their parents seriously. It wasn’t until after my mother died that I came to know her as having lived a courageous and prophetic life.

Her name was Carla Emery. She was born a farmer’s daughter in Montana, just ahead of the baby boom, and she was born to teach. The way she tells it, she felt sorry for the hippies when they started showing up in rural places with no skills. She wanted to teach them how to get along. In 1974, she showed up at a Seattle craft fair with a self-published manual for living off the land, and her table was mobbed. It was a quick road to celebrity.

But it was a short road, too. By the time I was born, six years later, America had shifted into the dawn of the Reagan era. My mother’s promise of spiritual fulfillment found through animals and muck and laboring to the harvest was more laughable than livable.

America gave up on my mother. But she didn’t give up.

All through the 80’s and the 90’s, my mother was a has-been and a nobody, but still she preached her difficult message to the world. She crisscrossed the country with boxes of books in the back of the van, meeting all her people: tending souls. Where the counterculture had been a forefront press, now it was the fringe of society. All the people on the edges: survivalists, die-hard hippies, drop-outs, and mountain libertarians. My mother met them all. She spoke to them. She gave lectures on “The Modern Homesteading Movement” and “Peak Oil.”

I was mortified. I couldn’t get away from it fast enough. There’s nothing worse than being a teenager whose mom does a public demonstration of how to kill a chicken.

She died when I was 25 years old. It was the year 2004. Like my mother, I am bound to the consciousness of my own time and my own generation. And, lately, we are turning back.

There have been books: in the last decade, a whole genre of exposé revealing the problems with our food supply and food supply chain. There is a deep and underground craving for a better way. Spiritual wholeness. Integrity. Slow food. Resistance to greed and commodification. My mother’s manual for living off the land is popular again.

It was several years ago, convergent with my husband’s desire to use his construction skills to build something of his own, that I began to make the shift myself. I began to drop consumerism. I picked up some gardening gloves. I started looking more and more like my mother every day.

So there you go. Now you know somebody who lives off the grid. I am here, in my woods, living my simple life: strange to society, perhaps, but natural in the most profound way. I live with the land, with the rhythms and the seasons of nature. And I raise my mother’s ghost. 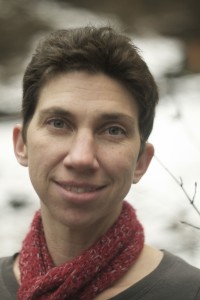 Esther Emery used to direct stage plays in Southern California. But that was a long time ago. Now she is pretty much a runaway, living off the grid in a yurt and tending to three acres in the foothills of the Rocky Mountains. She writes about faith and rebellion and trying to live a totally free life at www.estheremery.com. Connect with her on Twitter @EstherEmery.