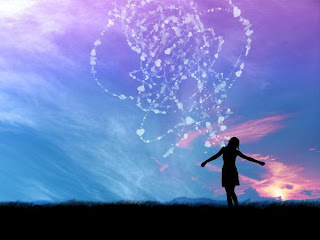 In Romans, Paul says that nothing neither death nor life, neither angels nor demons,neither the present nor the future, nor any powers, neither height nor depth, nor anything else in all creation, will be able to separate us from the love of God that is in Christ Jesus our Lord.

No matter what we do, no matter what happens to us, he continues loving us. The love of God always shines on us. The pleasure of prayer remains open to us, and the power of prayer to change us (if not our circumstances).

Can we say the same? That nothing He does will stop us loving him?

Lord, I want to be so in you, so engrafted in you, so hidden in you, that not loving you is inconceivable, for, you and I, we’re one. I am in you, inside your heart, part of you, and you are in me, in my heart, part of me.

I am listening to Brennan Manning, The Ragamuffin Gospel on my iPod as I walk (on the hottest days of the year to date). And I experience grace. I allowed myself to become overweight through 3 decades of being sedentary, and eating carelessly and unthinkingly. And I get to listen to amazing stuff—the Bible, Blue Like Jazz, and The Ragamuffin Gospel—as I walk to fend off further weight gain, and with grace, burn off some unnecessary pounds.

Anyway, the rest of this post shares some of Brennan Manning’s fabulous insights from Chapter 1 of The Ragamuffin Gospel .

“As we read Psalm 123, “Just as the eyes of slave are on their masters’ hand, or the eyes of a slave-girl on the hand of her mistress,” we experience a vague sense of existential guilt. Our eyes are not on God

Our approach to the Christian life is as absurd as the enthusiastic young man who had just received his plumber’s license and was taken to see Niagara Falls. He studied it for a minute and then said, “I think I can fix this.”

Fyodor Dostoyevsky caught the shock and scandal of the gospel of grace when he wrote in Crime and Punishment:

At the last Judgment Christ will say to us, “Come, you also! Come, drunkards! Come, weaklings! Come, children of shame!” And he will say to us: “Vile beings, you who are in the image of the beast and bear his mark, but come all the same, you as well.” And the wise and prudent will say, “Lord, why do you welcome them?”

I believe the Reformation actually began the day Martin Luther was praying over the meaning of Paul’s assertion that righteous shall find life through faith (see Romans 1:17). Like many Christians today, Luther wrestled through the night with this core question: How could the gospel of Christ be truly called “good news” if God is a righteous judge who rewards the good and punishes the evil? Did  Jesus really have to come to reveal that terrifying message? How could the revelation of God in Christ Jesus be accurately called “news” since the Old Testament carried the same theme, or for that matter, “good” with the threat of punishment hanging like a dark cloud over the valley of history?

But as Jaroslav Pelikan notes: “Luther suddenly broke through to the insight that the “righteousness of God” that Paul spoke of in this passage was  the righteousness by which for the sake of Jesus Christ, God made sinners righteous through the forgiveness of sins in justification.

When he discovered that, Luther said it was as though the very gates of Paradise had been opened to him.”

What a stunning truth!

“Justification by grace through faith” is the theologian’s learned phrase for what Chesterton once called “the furious love of God.” He has a single relentless stance toward us: He loves us. He is the only God man has ever heard of who loves sinners. False gods—the gods of human manufacturing—despise sinners, but the Father of Jesus loves all, no matter what they do.

But, of course, this is almost too incredible for us to accept.

Nevertheless, the central affirmation of the Reformation stands: Through no merit of ours, but by His mercy, we have been restored to a right relationship with God through the life, and resurrection of His beloved Son. This is the Good News, the gospel of grace.

With his characteristic joie de vivre, Robert Capon puts it this way: The Reformation was a time when men went blind, staggering drunk because they had discovered, in the dusty basement of late medievalism, a whole cellarful of fifteen hundred-year-old, two-hundred-proof grace—of bottle after bottle of pure distillate of Scripture, one sip of which would convince anyone that God saves us single-handedly.

The word of the gospel—after all those centuries of trying to lift yourself into heaven by worrying about the perfection of your bootstraps—suddenly turned out to be a flat announcement that the saved were home before they started… Grace has to be drunk straight: no water, no ice, and certainly no ginger ale; neither goodness, nor badness, nor the flowers that bloom in the spring of super spirituality could be allowed to enter into the case.