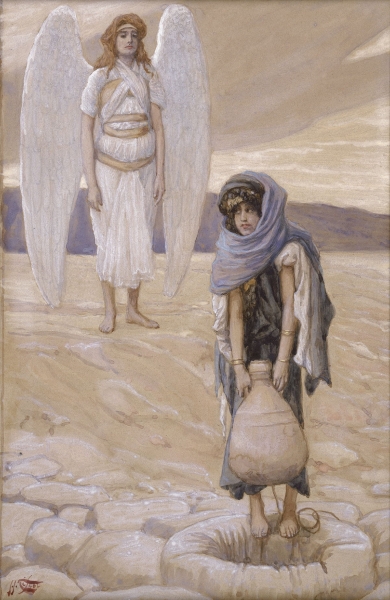 Image: Tissot, Hagar and the Angel in the Desert

Hagar, Egyptian maidservant of Sarah, has a hard life. Impregnated, basically raped by Abraham, she is bullied and persecuted by a jealous Sarah—so much so that probable death in the desert feels preferable. (Genesis 16)

And in the desert, the runaway slave, with only the clothes on her back, sees the Lord.

And she returns to her mistress, who is “very wealthy in silver and gold, sheep and cattle and male and female donkeys, menservants and maidservants and camels.”

The rich get richer; the poor get poorer. It sure seems as if Sarah has won and Hagar has lost, doesn’t it? Perhaps.

It is Hagar, not Sarah who sees “the Lord who sees me.” It is Hagar He advises. Hagar is promised not only life, but descendants too many to count. She goes back to Sarah, under the Lord’s protection, bearing his promises.

And Sarah knows nothing of this. Her maidservant has returned, that’s all she knows.

“What is essential is invisible to the eye,” Antoine St-Exupery wrote.

Our secret life with the Lord determines our happiness, and the course of our lives. It is, however, invisible.

I love the Bible, and I love teaching it. Last year, as I led a Bible study I said, “Ask and you shall receive,” “Give and it shall be given you,” nothing radical or reactionary, just word for word  from the Sermon on the Mount. An academic in my group challenged me, “You say that because you live in the West. What about the starving people in Africa?”

And I asked, “Do you think everything Jesus said would not be as true and as valid in Africa as in Oxford, England?”

And an older, wiser woman, who has been to Africa on mission, numerous times, said, “Our African brothers are SO generous, and they have nothing.”

So are the righteous forsaken in Africa?

I am convinced that the same Gospel, the same promises are true for the world’s poorest as well as the world’s richest, but I am silent, because unlike Heidi Baker, who knows from experience that the same Gospel which is true in Southern California is true in Mozambique, I have not yet worked with the poorest people in Africa (though I have worked with the very poorest in India, with Mother Teresa, full time for 14 months, and hung out a little with the poor in Cambodia).

Hagar, the loser, ran away and came back starving. That’s what Sarah might have thought.

But the truth was that Hagar had been comforted by the pre-incarnate Christ himself, had received his promises, had returned at his command, and under his secret service protection.

We cannot say the Gospel does not work for the poorest because we do not know their secret encounters with God, the way he comforts him, the tenderness with which he looks at them, what he promises them in this life, or beyond. Certainly the way Christ looked at Hagar was so profoundly moving that that became her name for God—“ Lahai Roi. You are the one who sees me.” She is content to return to slavery and abuse because “I have now seen the One who sees me.”

God sees. God knows. At a difficult patch in my thirties, I was mentored by Lolly Dunlap. Discussing something difficult she went through, or I was currently going through, she would say, “God sees. God knows.” And sometimes, as it was with Hagar, that is enough. We are seen by the One who sees us. He has things in hand. He will bring about a kind of justice. The promises to Hagar mirror the promises to Abraham, “I will so increase your descendants that they will be too numerous to count,” (Gen 16:10).

The apparently forsaken Hagar has seen God, received divine consolation and a divine promise. She returned to abuse, strong in herself. Her eyes had seen God, and were watching God.

It comforts me. There is so much suffering in the world about which I can do little or nothing, so many stranded starfish on the beaches, gasping for the ocean.

Father and Fondler of Heart Thou has Wrung

And, perhaps, most probably, just as he has his dark descending of comfort and mercy to Hagar, and to us, so too he descends to all the wretched of the earth.

At an Oxford party last week, I was talking to a World Vision Jerusalem worker, and mentioned I had been to Israel during the intifada in 1990. He said, “Oh, that was the easy time. The treatment of the Palestinians by the Israelis is profoundly disturbing now. It’s very cruel.” He described it. I was in shock, in tears, in the middle of that 60th birthday party.

Can I do anything about it? Well, yes, a little because I know Someone who can. Lahai Roi, the God who sees: Please comfort those children of Ishmael.

Other situations sadden and disturb me. The treatment of the prisoners in Guantanamo Bay, some of whom have been waterboarded 183 times in one month, and put into inhumane and humiliating stress positions for prolonged hours.

Those in North Korean prisons

The women flogged under Sharia law.

The Indian and Filipina domestic workers in the Gulf, who have their passports confiscated, work long hours, are physically and sexually abused, and are often not paid.

Bonded labourers in India whose debts are transferred from generation to generation at exorbitant interest.

Slaves in Mali or restaveks in Haiti among the 21 million slaves in the world.

The Afghani single women and widows forbidden to work by the Taliban who become almost catatonic in their depression.

While we do need to share our money wisely, (the Biblical suggestion of sharing 10% with priest, widows, orphans and aliens is a good one) and raise awareness, and pray, it is some comfort to me that not a sparrow falls but his eye is on it. Not a human suffers, but his eye is on them. And how he comforts them, what he whispers to them, what promises he makes to them, we do not know.

Hagar was neither a Christian nor a Jew, but her plight did not escape the eyes of the benevolent one who saw her.  She went back to slavery and abuse apparently unaided, but, in fact, having had a secret encounter, received secret comfort and bearing a secret promise.

And the same God looks on the 21 million languishing in slavery, with the same blazing eyes of love and comfort. He sees. Perhaps he speaks to them in their hearts…

And so we commend the Hagars of this world to his protection, because we cannot do a whole lot more, because as we trust him in our afflictions, we must trust him in theirs, and pray that he will wipe every tear from their eyes, in this world, and in the world to come.