I am grateful to my husband, Roy,  writing this post!

We had a great time on our first day in Istanbul.  The weather was perfect, and the people very friendly.

Haghia Sophia (also spelled Hagia Sophia, and known as Aya Sofya, in Turkish) was originally built by The Emperor Justinian in the 500s, and despite centuries and conquerors that have passed, the structure is still very much the same.  Unfortunately, the mosaics are almost entirely destroyed or plastered over.

From the outside, it is rather drab 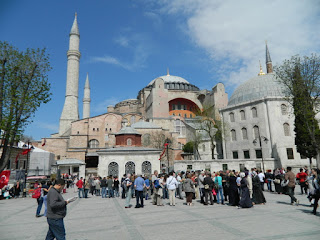 and a mixture of styles, Byzantine 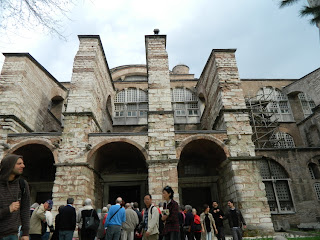 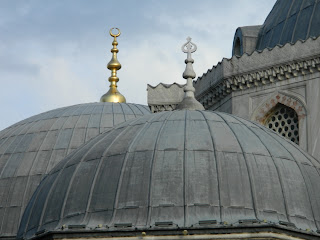 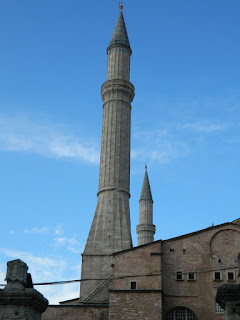 Once inside you can appreciate the grandeur of what was the largest enclosed space in the world for 1000 years.  (Surpassed by the present St. Peter’s, I assume) 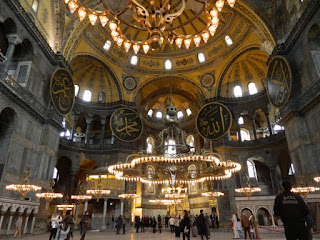 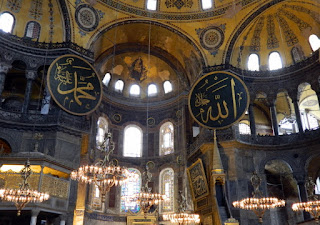 Looking up, one sees the main dome 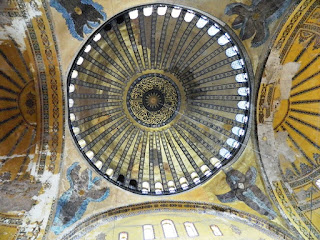 and an upper gallery, which is accessible, and holds the few remaining mosaics (see below), which are definitely worth the climb. 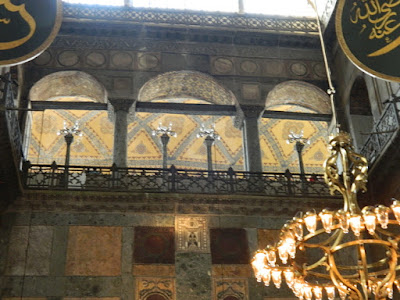 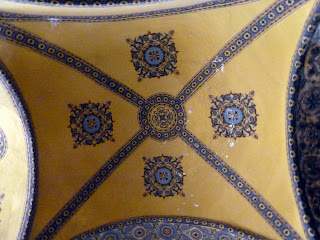 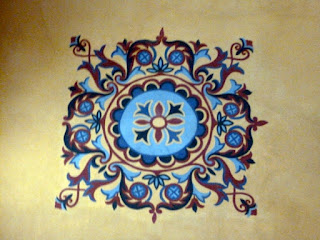 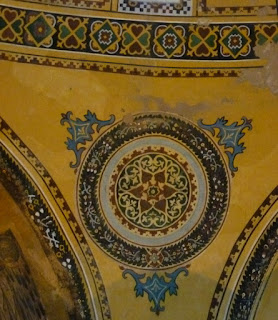 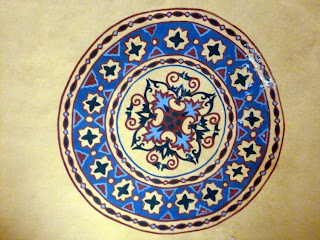 The mosaics in the original were designed to be view by flickering candle/lamp light.  The individual tiles were placed at different angles to they would twinkle in flickering light.   The lamps are now electric, do create a magical atmosphere when viewed en masse

The Arabic calligraphic inscriptions are on huge wooden discs attached to the walls.  Here is one 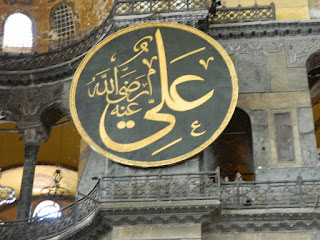 The way up to the upper gallery is by way of a cobbled helical ramp rather — than the usual stairs.  Why?  It was easier to roll huge barrels of lamp up a ramp.  Once there, this is the view from “The Empress’s Lodge”, where as the sign says, “she had the best view of the service”. 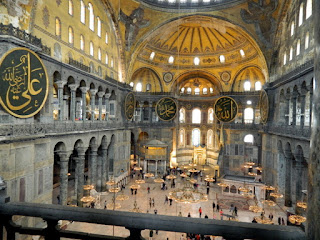 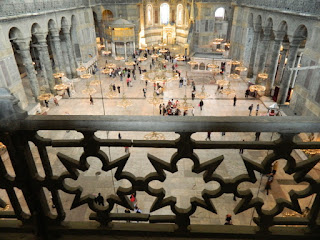 A glimpse of the Blue Mosque through an upper window.  The are very few windows the the Hagia Sophia, as they weaken the structure. 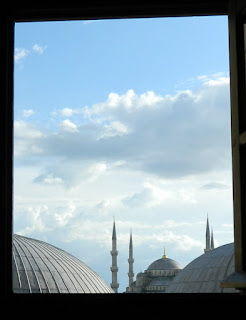 A couple of capitols visible from the upper gallery: 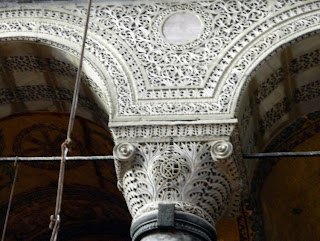 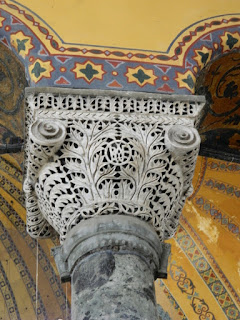 And finally the mosaics which are tucked away in corner, and we almost missed.  The following three images    are the remains of single large mosaic

The are two other mosaics, which oddly enough feature our two daughters Zoe and Irene

Irene is in the shadow of a pillar, here is a better image of her 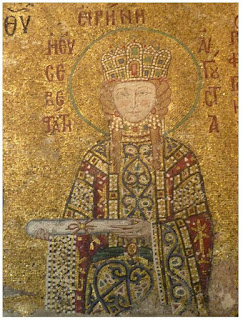 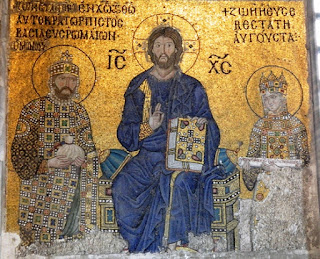 (Wikipedia offers: “In Christian iconography, Christ Pantocrator refers to a specific depiction of Christ. Pantocrator or Pantokrator (from the Greek Παντοκράτωρ) is a translation of one of many Names of God in Judaism. When the Hebrew Bible was translated into Greek as the Septuagint, Pantokrator was used both for YHWH Tzevaot “Lord of Hosts” and for El Shaddai “God Almighty“.
The most common translation of Pantocrator is “Almighty” or “All-powerful”. In this understanding, Pantokratoris a compound word formed from the Greek words for “all” and the noun “strength” (κρατος). This is often understood in terms of potential power; i.e., ability to do anything, omnipotence.Another, more literal translation is “Ruler of All” or, less literally, “Sustainer of the World”. In this understanding, Pantokrator is a compound word formed from the Greek for “all” and the verb meaning “To accomplish something” or “to sustain something” (κρατεω). This translation speaks more to God’s actual power; i.e., God does everything (as opposed to God can do everything).

The Pantokrator, largely an Eastern Orthodox or Eastern Catholic theological conception is less common by that name in Western (Roman) Catholicism and largely unknown to most Protestants. In the West the equivalent image in art is known as Christ in Majesty, which developed a rather different iconography.)

As you leave, there is a magnifying mirror that reflects a mosaic above your head.  The effect is much more dramatic than this photo: 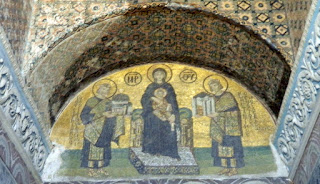