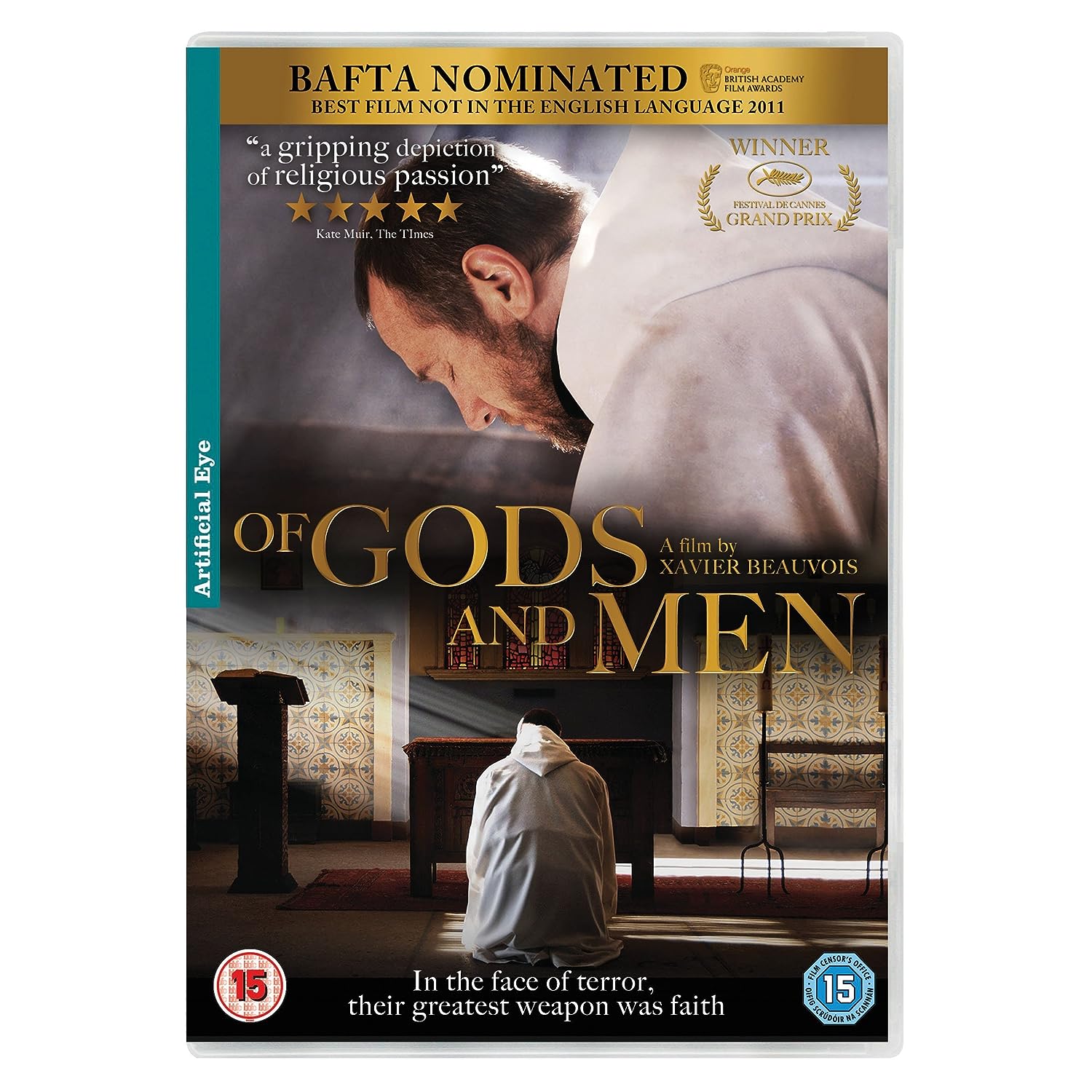 I watched this film by Xavier Beauvois last night. It is one of the most beautiful, even sublime, films I’ve seen in a long time.

It’s the true story of 9 Trappist monks in the Tibhirine Monastery in the Atlas Mountains of Algeria. They live a beautiful life of prayer, Gregorian chant, and work: medical work among the poor for Brother Luc; study of the Koran for the scholarly abbot Christian; and making honey, growing vegetables, and tending sheep for the others. They are self-sufficient, and advise, succour and provide free medical care for the local villagers, who love them.

Algeria was torn by a civil war between a corrupt government and the mujahadeen. The latter are barbarous–they murder girls without the hijab; teachers who speak of “love marriages;” harmless Croatian highway workers.

They pay the monks an armed visit. Both army and police warn the monks that it is a just a matter of time before they too are murdered. And offer armed protection.

The Abbot, Christian de Cherge refuses. He cannot have the soldiers of a corrupt government in the monastery.
* * *

The crux of the drama is the decision: Should they stay, or return to France?

The mujahadeen are illiterate and murderous. Sooner or later, they will be murdered, they all realize.

The villagers plead with them to stay. They feel safe as long as the monks stay.

And they do, madly sacrificing their one and precious life (in a decision, I feel was a mistake).

Why? Because they believed they had already died when they decided to follow Christ as a monk. That being a martyr was no less foolish than being a monk. That they had chosen to incarnate with the villagers, in their poverty and powerlessness, and to flee would not be right. That the Good Shepherd would not do that. That they should stay in the place they had committed to stay (and trust the results of that choice to God).

It is perhaps relevant that Trappists take the fourth vow of stability. They promise to stay rooted in the monastery they enter. And so these monks do.

They are taken hostage. Murdered.  As they more or less foreknew.

To betray your ideals and everything you have lived for to save your own life is just another form of death.

So fleeing would negate their commitment to love, powerlessness, trust, incarnation, service, the village of Tibhirine, Algeria, and their fourth monastic vow of stability, commitment to a place.

What then would they live for in the future if they had allowed fear to negate everything they had lived for so far–and hoped to live for?

This is the reasoning which leads men and women to die rather than deny Christ.
* * *

The Abbot Christian de Cherge belonged to a distinguished French military family and fought in the French army during the brutal Algerian war of independence. A Muslim friend, Mohammed, faced down local rebels who wanted to shoot Christian when they were taking their customary walk, and discussing their faith. The next day, the rebels shot Mohammed.

The real life Christian left a beautiful testament, in which he addresses his “friend of the last minute, who will not have known what you are doing. May we meet again, as happy thieves in Paradise.”
* * *

In the contemporary classic, Desiring God, John Piper ridicules the idea that there is an inherent beauty in the monastic life of prayer, quietness and worship.

This film shows the beauty of that life. You can almost taste the silence. The peace. The grace. The balm of the Psalms. Oh to be a contemplative! A contemplative in the world, since my life choices have closed the other path to me.

* * *
And here is the Testament left by the real-life the abbot, Dom Christian de Chergé

If it should happen one day — and it could be today — that I become a victim of the terrorism which now seems ready to engulf all the foreigners living in Algeria, I would like my community, my Church and my family to remember that my life was GIVEN to God and to this country.

I ask them to accept the fact that the One Master of all life was not a stranger to this brutal departure.

I ask them to associate this death with so many other equally violent ones which are forgotten through indifference or anonymity.

My life has no more value than any other. Nor any less value. In any case, it has not the innocence of childhood.

I should like, when the time comes, to have a moment of spiritual clarity which would allow me to beg forgiveness of God and of my fellow human beings, and at the same time forgive with all my heart the one who would strike me down.

I could not desire such a death. It seems to me important to state this.

I do not see, in fact, how I could rejoice if the people I love were indiscriminately accused of my murder.

It would be too high a price to pay for what will perhaps be called, the “grace of martyrdom” to owe it to an Algerian, whoever he might be, especially if he says he is acting in fidelity to what he believes to be Islam.

I am aware of the scorn which can be heaped on the Algerians indiscriminately.

I am also aware of the caricatures of Islam which a certain Islamism fosters.

It is too easy to soothe one’s conscience by identifying this religious way with the fundamentalist ideology of its extremists.

For me, Algeria and Islam are something different: it is a body and a soul.

I have proclaimed this often enough, I think, in the light of what I have received from it.

I so often find there that true strand of the Gospel which I learned at my mother’s knee, my very first Church, precisely in Algeria, and already inspired with respect for Muslim believers.

Obviously, my death will appear to confirm those who hastily judged me naive or idealistic:
“Let him tell us now what he thinks of his ideals!”

But these persons should know that finally my most avid curiosity will be set free.

This is what I shall be able to do, God willing: immerse my gaze in that of the Father to contemplate with him His children of Islam just as He sees them, all shining with the glory of Christ, the fruit of His Passion, filled with the Gift of the Spirit whose secret joy will always be to establish communion and restore the likeness, playing with the differences.

For this life lost, totally mine and totally theirs, I thank God, who seems to have willed it entirely for the sake of that JOY in everything and in spite of everything.

In this THANK YOU, which is said for everything in my life from now on, I certainly include you, friends of yesterday and today, and you, my friends of this place, along with my mother and father, my sisters and brothers and their families — you are the hundredfold granted as was promised!

And also you, my last-minute friend, who will not have known what you were doing:

Yes, I want this THANK YOU and this GOODBYE to be a “GOD BLESS” for you, too, because in God’s face I see yours.

May we meet again as happy thieves in Paradise, if it please God, the Father of us both.