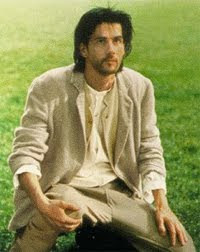 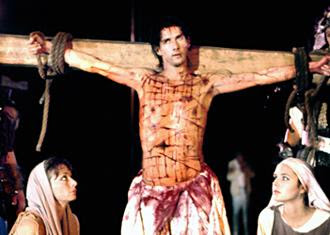 More modern and edgy than the sheerly beautiful and sublime Of Gods and Men, this French language film had me gripped and intrigued.
Daniel Coulombe, an out of work actor is hired to modernize Montreal Cathedral’s dated and floundering passion play.
A dedicated method actor, he immerses himself in the Gospels, and in all the historical and archeological information he can find on the life and times of Jesus.
The movie bears unobtrusive parallels to the Gospels. Daniel chooses a cast of unlikely actors–nude models, porn stars, unwed mothers–people who have known what it is to be humiliated, to fail, to be outsiders, on the edges, derided.
For such the Gospel has extraordinary relevance. The idea that each of them is special to God. That His acceptance is infinite. That for sinners, such as them, Christ came. And so they give emotionally charged, luminous, heart-speaking-to-heart performances in the Passion Play.
Daniel immerses himself in the words of Christ, producing haunting theatrical performances of Jesus mingling with the crowd with his powerful message of God’s love and acceptance, with his encouragment not to worry but to trust, and to feed on his words and message. He makes the words of Jesus contemporary and relevant, as, in fact, they are–though they often cry out for “Fresh Expressions.”
Since, the company uses method acting (immersing yourself in your character), Daniel, in particular, begins to see the world as Jesus would have. When his friend is commanded to strip in a modelling audition, he overturns and destroys the expensive cameras, computers and equipment.
And he berates pompous religious hypocrites in words of Christ from the Gospels–which are a presciently accurate portrayal of religious leaders when power, money, prestige muddy the pristine waters of simple devotion.
His words come too close to the bone. The play is closed down. They perform it one last time in defiance. Security is summoned. In the melee, the cross with Daniel on topples, crushing him.
He is taken to the Jewish General Hospital where a shifty doctor, having established that he has no relatives, declares him brain dead, and takes his heart, eyes, liver, kidney,s etc from his still living body to give new life to those on the waiting list.

And so Daniel Coulombe (dove in French) has a resurrection!!

* * *
What most fascinated me was the extraordinary power and relevance of Jesus’ words to transform mind, heart and character of anyone who meditated on them long enough.
Daniel Coulombe’s performance reminded me of a splendid portrayal of Jesus in the Holy Land Experience in Orlando,  Florida. Jesus strolled through the amusement park crowds, just chatting. He crouched down in front of my daughter, Irene, showed her a flower, and told her not to worry, since God would give her beauty as he made the lilies shine.
He scooped up Zoe in his arms, and delivered the Sermon on the Mount, holding her, telling the crowd that they should become like little children.
Zoe was captured on dozens of video cameras, and people recognized her all week as we did the tourist circuit in Orlando–Disneyworld, Epcot Centre and MGM Studios. She was young enough to believe that Jesus carried her, which is what she told all her friends!