We saw the Creation Theatre’s production of Marlowe’s Dr. Faustus at Blackwell’s on Friday. Amazing to watch it surrounded by books in the Norrington Room.

I was amazed to realize how much of that sheer poetry I remembered from my undergraduate days–I have only seen Faust once since then.

Mephistopheles was a low-key demon who plaintively explains

As a century later Milton’s Satan would say, “Which way I fly is Hell; myself am Hell…”

Was this the face that launch’d a thousand ships,
And burnt the topless towers of Ilium?
Sweet Helen, make me immortal with a kiss.
Her lips suck forth my soul: see where it flies!
Come, Helen, come, give me my soul again.
Here will I dwell, for heaven is in these lips,
And all is dross that is not Helena.

And then his anguished cries as the midnight nears,

O I’ll leap up to my God! Who pulls me down?
See, see where Christ’s blood streams in the firmament!
One drop would save my soul, half a drop: ah my Christ—
Ah, rend not my heart for naming of my Christ;
And the horror of eternity strikes him
O, if  my soul must suffer for my sin,
Impose some end to my incessant pain;
Let Faustus live in hell a thousand years,
A hundred thousand, and at last be sav’d!

It was an amazing play, very dramatic, and played in an understated way.
On the face of it, Faustus made a sensible bargain. He did not believe in hell–or didn’t want to think of it–so for wealth, fame, success, sex, he bargains away his soul. Of course, as the hour of death neared, he had second thoughts….

Temptation was presented beautifully, with both the kindly and menacing angels speaking persuasively to Faustus’s shattered, tormented soul…
* * *

Oh well, we had the plumber in during the morning for a leak, had a visitor whose visit spilled over the evening service, and felt so physically uncomfortable as I hadn’t exercised, that I chose the gym instead of church, and felt a whole lot better for it (probably).

When I am physically uncomfortable and haven’t exercised, I find it hard to pray. And a comfortable, well-exercised body does wonders for the soul.

And here are Zoe and Irene in the Norrington Room at Blackwells.  Each of them, true bookworms, grabbed a book in the interval. Note what they grabbed 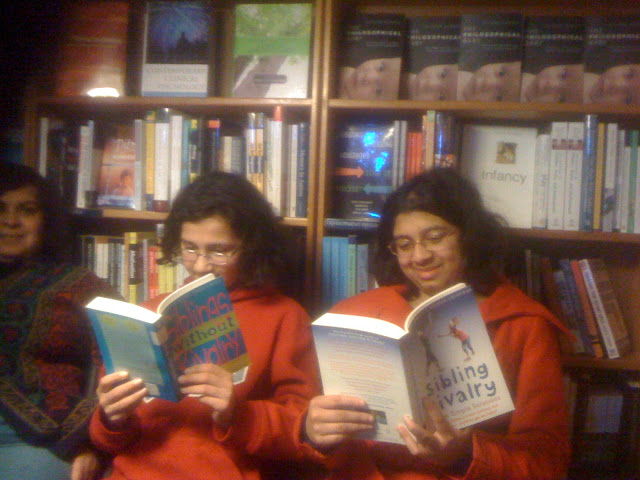