Marginalia imbues a book with your own memories. 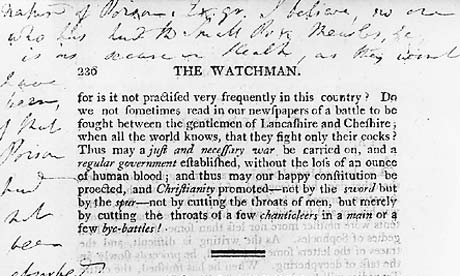 Marginalia imbues a book with your own memories. Nice piece by Toby Lichtig.

Defacing books: the effluence of engagement

I’m not just talking about ‘marginalia’. My passion for defacing books includes doodles, addresses, recipes, and they all remind me of where I was – and who I was – when I read the work
Toby Lichtig
Mark Twain loved it, Virginia Woolf despised it and Barbara Kingsolver feels so strongly about the subject that she won’t do it to her own. Henry VIII deemed it a vital part of the experience (but, then, he could get away it), while Joe Orton and Kenneth Halliwell were once arrested for it.
I am, of course, talking about defacing books – a much maligned practice of which I am a passionate disciple. My flirtation with textual mutilation started off at school with primly creased corners and pencilled underlinings, but I soon progressed to cocksure highlighting and full-blown ink-on-paper action – the effluence of engagement, the living, livid trace of dialogue. If, as the poststructuralists have suggested, the act of reading is an act of violence, then scrawling across the page in cheap biro must be its logical corollary.
I’m not just talking about highbrow jottings: notes and queries, references and witticisms, the literary art of “marginalia” (a term coined in 1832 by that keenest of annotators, Samuel Taylor Coleridge). No, in my library anything goes: doodles, numbers, addresses, lists, recipes and the ensuing food stains. Personalising my books is an intrinsic part of the interaction (which is why I tend to be neurotic about holding on to what I’ve read). Perhaps it’s the fault of my somewhat sluggish memory: the marks and scrawls help me to recall the text – and, crucially, the person I was when reading it: how I was feeling, where I was sitting, whom I was with. The smears on my copy of The Scarlet and the Black (coffee certainly; jam I think) take me back to the cafe in Rovereto in northern Italy, where I read it over the course of a week in 2002. When I look at my edition of Dracula, with half of its cover torn away, I’m reminded of that night at university when we ran out of Rizla packets and were too lazy to look for more orthodox material.
Then there are the intrigues. A passage of particularly illegible scribbling might indicate I was reading while standing up on the tube, but how to explain the frantic-looking “phone Luca!!” on page108 of Samuel Beckett’s Trilogy? I no longer even know who Luca is, let alone what possibilities his being contacted might have brought. Such randomness adds heft and colour to the afterlife of my relationship with a given tome. A drawing by an old friend lies in my copy of The Great Gatsby – and for that reason I will always associate it with him. The Age of Extremes is in my mind an even fatter book than Eric Hobsbawm intended, thanks to the time I dropped it in the bath.
“I’m afraid I could never trust someone who would make irremovable marks in a library book,” says Desmond Bates in David Lodge’s novel,Deaf Sentence. But while I wouldn’t advocate defacing books that aren’t your own (like all violation, textual disfigurement should be by invitation only), there’s a prudishness to our reverence that I cannot get along with. Marking books is not heresy because literature does not happen in a vacuum. So you can keep your priggish white spaces, your stiff spines and spotless jackets. I prefer my pages with a little knowledge and experience; books with a back story, some miles on the clock.  And perhaps this is why I just can’t get excited about recent technological developments in the way we approach, and respond to, literature. While corporate giants clash over the pricing of ebooks, and readers of the world go delirious at the thought of accessing the sum total of history’s writing via their Kindle, nook or iPad, I intend to carry on reading as I always have: with an object I can physically alter; something I can damage with impunity. Ever-primed for action, my pen hovers restlessly just above the page.
Read my new memoir: Rosaries, Reading, Secrets: A Catholic Childhood in India (US) or UK.
Connect on Facebook: https://www.facebook.com/anitamathiaswriter/
Instagram: https://www.instagram.com/anita.mathias/
Twitter: https://twitter.com/AnitaMathias1
My book of essays: Wandering Between Two Worlds (US) or UK