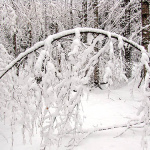 Penelope Swithinbank, an Anglican spiritual director and  retreat leader, once told me an excellent way to get over the hump of forgiveness.

Like many people, I can struggle to forgive for years, for decades, re-injuring myself in the process–so much so that I am included to think of forgiveness as a miracle God does for us, a surgery he performs in our hearts, rather than something we do by an act of will. But of course, it’s both!

Penelope mentioned an idea from The Spiritual Exercises of Saint Ignatius. Ignatius says that the best way to straighten a bent twig is not to force it into an upright position. It will merely snap back to its former position.

The way to straighten a bent twig is to deliberately bend it in the opposite direction. And then, when it springs back, it will move to an upright position.

Bless them and release them, for your own sake, so you no longer have to heft around the gorilla of grudges on your back.

Forgive completely because you are no longer going to sip old stale poison, and hope it kills them.

Forgive because you not going to have any cancer in your heart, no, not even a little. You are going to flush out the toxicity of tedious old grievances and grudges.

Unlock the prison doors, and release the sulky captive who could not forgive, who happens to be you, yourself. Release her into the open sunshine of God’s love.

Yes, that is the quickest way to forgive. Bending the other way. Hold your breath, jump into the pool of God’s love, and forgive the one who has wronged you. Bless her from your heart, before you think better of it.