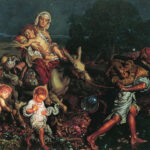 Herod was “disturbed” when the Magi asked, “Where is the one who has been born King of the Jews? We have seen his star in the east.”

He felt no excitement about the one chosen to be King by a higher power, the one whose birth had such cosmic significance that a new star appeared in the heavens.

Instead, he views Jesus as a threat to be eliminated, caring only for the security of his own position. He did not hesitate to murder to safeguard it (as people may not hesitate to slander or backstab anyone they perceive as a threat).

And so Joseph, Mary and Jesus go to Egypt, though they have done nothing wrong–leaving behind their friends and family, their familiar language, religion, food and customers–purely to escape Herod’s murderous, neurotic wrath.

Have you ever had a change forced on you because someone was jealous of your gifts? Threatened by you? Sadly, I have!

And the death of Herod does not mean instant safety either. They return to Israel when they hear the blessed words in a dream, “Those who were trying to take the child’s life are dead.”

But Judea is still not safe. Herod’s son was in charge.

And so, to protect their toddler, they relocate to an obscure town in Galilee, Nazareth, and bring him up there.

Exactly as foretold by the Prophet Isaiah.

All these detours, this apparent wasted effort, this obscurity, this ruination of a rooted career for Joseph, the upheaval for Mary and the toddler Jesus–all this was exactly in God’s plan.

We do not know.

We many never know.

Once we have reached “a certain age,” we look back at our lives, and say, “Oh, this worked out okay, because it led to this.” “Thank goodness that happened; it closed that door, and opened this.” “That worked out for good, because…”

But other things? Why did Milton– who was desperate to do just one thing: read and write–go blind? Why is my former pastor Dick Woodward a quadriplegic? Why did my mother lose her first-born son?

Why does God permit us to be blocked and thwarted through other people’s envy, fears and insecurities? Perhaps these blocks channel the force of the stream of our energy and talent into just the direction we were meant to go. Perhaps the stream goes underground and comes out stronger.

Or perhaps, and this is the truest answer, we just don’t know.

But someone else has written the play, someone else is directing it, and when the plot seems utterly senseless—we relax in the fact that we have had a sneak peek at the last act. According to the Book of Revelation, it will all end in celebration, in exultation, in a feast and rejoicing.

And so, when we do not understand the plot twists, we trust the brilliance of the author, the auteur, directing the story of our lives.

And despite all Herod’s machination, he just gets a chapter or so in Jesus’s story.