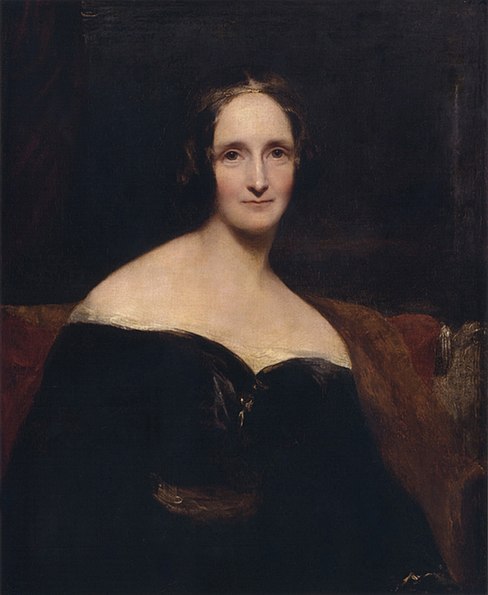 Our family listened to Frankenstein on CD during our last week in France.

Coincidentally, given the imminent explosion of the Eyjafjallajokull Volcano, Frankenstein was written during the “volcanic winter,” of 1816, also known as The Poverty Year, or The Year There was no Summer. This year-round volcanic winter, caused by a reduction in temperature caused by volcanic ash and droplets of sulphuric acid, obscuring the sun, destroyed crops in Northern Europe and the U.S. leading to the last great subsistence crisis in the West.
Byron suggested that they each write a supernatural tale to match the weather. His became The Vampyre. Mary conceived hers in “a waking dream.” I saw the pale student of unhallowed arts kneeling beside the thing he had put together. I saw the hideous phantasm of a man stretched out, and then, on the working of some powerful engine, show signs of life, and stir with an uneasy, half vital motion. Frightful must it be; for SUPREMELY frightful would be the effect of any human endeavour to mock the stupendous mechanism of the Creator of the world.”

The unnamed monster is abandoned at birth by his creator, Frankenstein, largely because of his terrible ugliness.
Mary Shelley’s mother, the radical feminist and philosopher Mary Wollstonecraft, died of puerperal fever 11 days after her birth. She was currently estranged from her liberal father, the philosopher William Godwin, ostensibly for eloping (with her step-sister) with Percy Shelley, but probably partly because Shelley refused to support the perpetually debt-ridden Godwin any more. The theme of abandonment, and abuse no doubt has autobiographic echoes. I am moved by her description of the monster’s loneliness and rejection, and how it turns him twisted and malicious, albeit with brief repentances.

She began writing the book when she was 18, and completed it at 20.

Though (perhaps because) deprived of formal education by her mean stepmother (who contrived to give her own less gifted daughter a good boarding school education) Mary was fanatical about learning and self-education all her life.

She travelled around Europe with Shelley, devoting their time to “writing, reading, learning, sightseeing, and socialising.” Sounds idyllic! After Shelley’s death she continued her intensive reading and study. “I think that I can maintain myself by my pen, and there is something inspiriting in the idea,” she wrote.