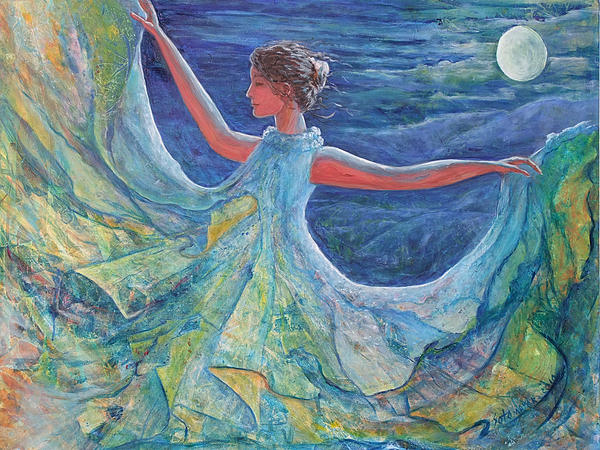 Dancing with the Lord,
That’s the way I want to live:
moving in so closely
that I’m guided unconsciously.
He doesn’t mind my clumsiness,
my obvious inexpertise.
And when exhaustion
makes me stall, I climb
onto his feet, like a child
on her father’s toes,
and the dance continues

while His music plays.

So you are setting out to meet the lion at the head of the waterfall.

But the way is long and sweaty, and there are temptations everywhere. You look down and see gold–fool’s gold, real gold? Should you forget the waterfall, and investigate?

You meet people whose life is working perfectly well. They don’t believe in no waterfall, they tell you.

People who started out with you are now rich and famous. They have no longer look for waterfalls; they just enjoy their life.

You would kind of like the fame and money and praise too.

Have they really reached the waterfall? Drunk of it? Or is talking and writing about more rewarding?

You do not know. All you know is that at the waterfall a man once said there was life in its fullness.  There was peace which the world cannot take away. You would like peace to permeate your personality. There is the joy which no one can take away. Oh, you want to live in that joy. At the waterfall, you will never thirst again. Oh, and you are restless.

And you must continue, the long, arduous, solitary, uphill slog uphill to the waterfall, to know God in his fullness instead of stopping where you are and speaking, writing, blogging and tweeting about the waterfall. Basking in all the attention and money and fuss and power and admiration.

For no one will know that you haven’t actually drunk of the waterfall of joy and peace and fullness.

No one except you, and the lion who lives at the waterfall

Christian writing, blogging, speaking, song-writing which is not based in utter honesty is a waste of time.

It is telling other people about a waterfall we have heard tell of, but have not yet reached. Or of a waterfall we once drunk of, but no longer do. Worse, it is talking about tangential things, the birds, mammals, trees and flowers on the way to the waterfall, instead of the waterfall itself

We have given up walking the walk for talking the talk.

Forbid it, Lord, that we whose trade is words ever substitute writing, speaking or blogging of you for serious time spent with you at your waterfall of delight.