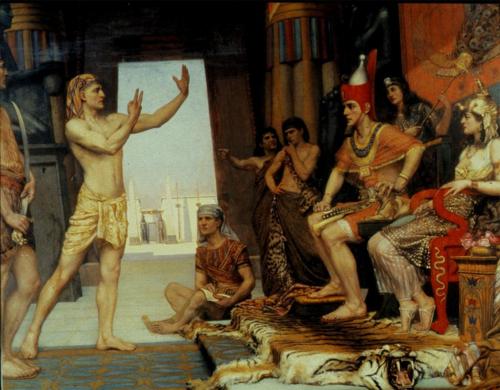 Joseph is seventeen when he sees his sheaf stand up and his brothers’ sheaves bow down. When he sees the sun, moon and eleven stars bow to him.

Interestingly, God shows him his destiny, the end of his days, but not what he needs to do to get there.

And that is because there is nothing Joseph needs to do to get there. God will do it all. Joseph merely needs to cooperate as God forms the character necessary to bear “the weight of glory.”

Our lives are full of ironies: There are always two stories going on: what we think is happening, and what God knows is happening, what He is doing.

What Joseph thought was happening was pits and the pits—betrayal, slavery, false accusation, prison, being forgotten by those he helped.

What God knew was happening: Joseph was developing administrative experience, integrity, trustworthiness, gifts of dream interpretation, people skills. He was being prepared for greatness in the very years he thought were wasted.

Slavery to Potiphar, Pharaoh’s captain of the guard, leads to Joseph being put in charge of his household, thus developing the extraordinary administrative gifts he probably didn’t even know he possessed.

Unjust accusation and confinement to a dungeon leads to him running the prison, and meeting those in Pharaoh’s circles, learning how Egyptians speak, dress, behave and think.

And what was paramount, he develops character—loyalty, diligence, organization, sexual purity. He sheds self-pity and any pridefulness over his spiritual gifts. He learns the great lesson of trusting God.

And through an improbable series of events—in line with his seminal gift–God moves him upwards.

There is so much stress in our world on hustling and networking. Perhaps too much?

Ah, the time we would save if we did our work, our eyes on God, without incessant networking with one another, hoping for a hand up, and a leg up, discovery, and a big break. Cannot God give us all these things as we do the work? I do believe he can and he will, when the time is right.

None of the spiritual giants in the Bible networked and hustled to get the word out about themselves. Can you imagine Jeremiah or Isaiah or Ezekiel making nice so people would put in a good word for them with Ahab or the current wicked king?

And what good would that have done them? Their work, their power, their career, their specialness came from this strange, insistent thing that kept happening to them. They heard God speak. And they wrote with pens of fire: “Thus saith the Lord.”

Transcribing what they heard God say made their words special, and God ensured that their words endured. They kept their eyes on God. God promoted them.

Is it possible today in the twenty-first century to do the work and leave the rest to God? To let God organize our careers?

But what if we just did our work, listened to Jesus, and wrote what we heard–could we not trust him to get our words out to whom they might bless? A city set on a hill cannot be hidden.

This is something I am increasingly trying to do.

I have come to the place where I have no energy to network, nor the temperament to flatter, to pretend to like what I do not like, to maintain relationships for what good the other person might do me or my career. And how could God possibly bless such relationships?

I am grateful to Shelly Miller  for hosting the first version of this on “Redemption’s Beauty.”