How to get traffic for your blog

1) It’s writing without gatekeepers. You put your thoughts out there; if they resonate, you find an audience, readers, “followers.”


2) It is more or less a meritocracy, but it can also be tweaked and cheated like the old system.


3 Nothing is better for breaking a writer’s block


4) Bloggers who are honest and keep in touch with their souls are probably happier for the exercise.

Finding Your Own Blogging Voice


I have been writing for a while and have definitely found my own distinctive writing voice. Blogging, on the other hand, was a different ball game–putting up your thoughts on the web, for friend and foe alike, raw, unprocessed, unedited. Wow!


How does one find the voice for that? Not too personal, not too boring, not too pompous or distant. Writing for unseen, anonymous readers.


I have been blogging for almost six months, with some success–top 20 in Wikio UK in both culture and literature, high ranks in technorati, and top blog sites. But I had not found my real voice, me. I was not sharing who I really was, just what I thought.

An accident helped me find my own blogging voice. I wrote a post of great interest to the large Christian community to which I belong. I had 1400 page views within a week, 852 of them unique page views (the rest were repeats because of the 60 or so comments.)


And as always happens when you have a sudden spike in page views, most dropped off, but not all. My graph of page views was suddenly on another level.


I suddenly had a real audience–people I knew, whom I worshipped with every Sunday, and met mid-week every week. True, I did not know which individuals, but I suddenly felt I had real people reading my blogs, who somewhat knew me, and were interested in what I had to say.


There is nothing like that for finding one’s real writing or blogging voice.


I have now found my own distinctive blogging voice on two of my blogs, theoxfordchristian.blogspot.com and wanderingbetweentwoworlds.blogspot.com. I still need to find my own voice, who I really am, on my third blog, a literary blog called thegoodbooksblog.blogspot.com.


So, a truly good blog, a truly interesting one, is written by someone who is not afraid to tell you who she really is. 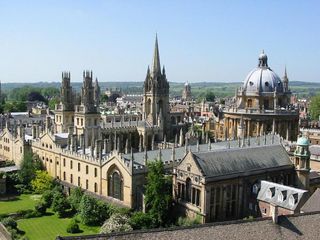 This is to announce that there will be another Book Bloggers’ Meet-Up on Saturday September 25th in Oxford. Venue and time are tbc, but that should be enough info for now to let you know whether or not you can make it.
We’d love to see as many bloggers as can make it, whether you’ve been blogging for years or weeks! If you’re interested, and haven’t already received emails about it (everyone who emailed about the one in May *should* have been contacted) then let me know on [email protected] – doesn’t commit you to anything, of course.

And do pop all this info up on your own blogs, if you’d like to.

“Blogs are the new marginalia, our annotated lives, riffs on our cultural and political patrimony (like this post), asides on the political drama of the day, knowing winks at perpetuity…” from [email protected]

The contribution to civilization of the Irish  “was the preservation of Roman and Greek texts amid the collapse of the Roman empire. The Irish had replaced the Christian tradition of martyrdom with that of “green martyrs,” or monks, whose own recent Celtic roots made them receptive to pagan literature. These monks set about collecting and copying such manuscripts — without censorship — in their remote Irish monasteries, while the barbarians thoroughly brutalized the continent.
These copyists acted as meme-promoters, keeping classical ideas alive until they could once again be let loose on a critical mass of fertile minds in the next renaissance. This is how the memes at the foundation of modern western thought skirted extinction — our knowledge of Plato comes to us through the ages via a thin but sinewy thread that extends through Ireland. Eventually, the Irish monks re-evangelized the continent, and made sure to take the classics with them. By the time the Vikings were raiding monasteries on Ireland, the texts were being kept safe by Irish monks as far afield as Italy.
And while copying was their main task, these monks could not help but populate the margins with annotations, comments, approval or mockery. Cahill writes (in 1995) about what might have motivated them:

[The monks] did not see themselves as drones. Rather, they engaged the text they were working on, tried to comprehend it after their fashion, and, if possible, add to it, even improve on it. In this dazzling new culture, a book was not an isolated document on a dusty shelf; book truly spoke to book, and writer to scribe, and scribe to reader, from one generation to the next. These books were, as we would say in today’s jargon, open, interfacing, and intertextual — glorious literary smorgasbords in which the scribe often tried to include a bit of everything, from every era, language, and style known to him.

That was, effectively, blogging, circa 700 A.D.
Of course, today, we bloggers have been relieved of the task of manually copying the memes we deem worthy of promotion (and disparagement); the cost of copying information is now negligibleIt is even more efficient merely to refer to the texts in question with a link (although at the risk of the link going bad).. Blogs are the new marginalia, our annotated lives, riffs on our cultural and political patrimony (like this post), asides on the political drama of the day, knowing winks at perpetuity…”

Blogging, slowing down, observing, and describing what you observe is one way to slow down and return to writing after a period of extroversion

I am really enjoying maintaining my three blogs. It is the only writing I’ve done that has provided a regular income, since my writing has always been feast or famine. (The blogs are monetized with ads).

Turning writing, my joy, into a business, has been a joy!!