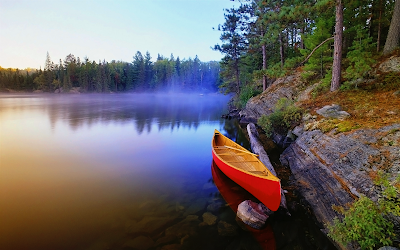 I am listening to Gustave Flaubert’s A Sentimental Education on my iPod as I walk.

It opens with a steamboat journey from Paris:

“The hill on the right bank of the Seine dropped out of sight, and another one loomed closer on the opposite side.

This hill was topped by trees dotted between bungalows with hipped roofs. They had sloping gardens separated by newly built walls, iron gates, lawns, greenhouses, and puts of geraniums set at regular intervals on terraces with parapets to lean on and enjoy the view.

As they caught glimpses of these small country villas, so charming and peaceful, more than one of the passengers thought longingly of owning one, and living out the rest of his days up there, with a nice billiard-room, their own motor launch, a wife, or some such dream.”

Have you ever dreamed such a dream? I sure have. We have been to Scandinavia for the last three summers—Norway first, then Sweden, then Denmark.

Scandinavians take summer very seriously, because it is so brief. Whenever there is a lake or a river or a fjord, you see these red-roofed houses, with a canoe tied to the mooring pad.

Roy and I look at each other, and we each know we are thinking, “I’d like a little summer house on a large lake, or by the ocean, or by a mountain tarn, and a little canoe to mess about in.”

When Roy retired early, two summers ago, we got some counselling so two intense people living together 24/7 would not provoke each other to distraction.

The counsellor was good, and offered us much insight into ourselves,though he ultimately drove me to distraction.

One issue which came up was that now that my gifted husband was home, I wanted him to do, well, simply everything.

I had a dream of living near a stream. “Roy, please could you get a water pump, and rocks and concrete, and construct a waterfall,  which will lead to a stream which will go around the garden.” Our garden is 1.5 acre, so this was no small task.

But no, I wasn’t joking, and I bought a whole pile of books which showed how one could construct an artificial waterfall and stream.

Roy got very stressed. He had his own list of Must-Dos, and Would-Love-To-Dos, and could not give me a date for when construction would commence on my waterfall and stream.

I got frustrated. I sulked. I felt a bit outraged. Roy had endless free hours. Why was he saying No to this small matter of a waterfall and stream which he wanted as much as I?

So I brought up his unreasonableness with the counsellor.

In reply, he told us two stories, which I thought were very foolish, and at which I did not smile.

But I remembered them, and puzzled over them, so, I guess, they were not that foolish after all. More like koan.

One was a story of man who wanted to be a millionaire. But alas, he realised that he lacked the intelligence, talent, education, drive and resources to become one.

So he thought, “Well, what do millionaires have that I might be able to afford?”

And he thought, “Ah, I bet a millionaire could afford to change his razor blade every day.”

Moral: Not everyone can achieve their dream. Only one person will be the most famous writer in the world; there will only be one richest man in the world.

However, most of us can achieve some of our dream. We can write, though we may not be wildly successful. We can travel some, even if we do not get to see all the beauty we want to.

Story Two was James Thurber’s magical incantatory story Many Moons. Spoiled princess Leonore cries for the moon, but is tricked into happiness by the moon on a necklace around her neck.

Examine the dreams you are convinced will make you happy. Perhaps a simulacrum of them will work just as well. Examine exactly what you want and see if a much simpler, easier thing will make you just as happy.

I saw magical homes on the Bosphorus Cruise we went on last April, winding between Europe and Asia–beach homes, mountain homes, lake houses. I sort of coveted some of these for the dream or illusion of peace they represent.

But heck, two houses to be furnished, kitted out, made comfortable, and kept clean. One is time-consuming enough.

So, while I have not totally given up the dream of the beach house, I have put on a very distant back-burner. I can be perfectly happy without it, which is, of course, the most persuasive reason not to save up to buy it.

One of the brilliant sentences from Richard Foster’s brilliant book   Celebration of Discipline which have lingered with me is this, We don’t need to possess things to enjoy them.

And now, when material temptation assails, I decide instead to be a razor-blade millionaire, revelling in the sea, and mountains and lakes from the large picture windows of my camper van, and renting the occasional idyllic cottage for a week, wearing the moon on a chain, being contented with all the goodness life offers me, sharp razor-blades, peace around my neck, and eternity in my heart!