It’s an honour and a pleasure to be invited by Anita to post a ‘guest blog’ here. I’d like to share with you, if I may, some reflections on the ‘genesis’ of a new poem, its first seeds and beginnings, and then flowing from that some thoughts on what it is that a poem, any poem, might be trying to achieve. It’s a story that starts with a confession and takes you on a journey from the apparently ordinary world of an office photocopier, back to a moment of vision in front of a burning bush, a chance to see things anew.

So, first the confession: I am sorry to say that I am responsible for having broken a college photocopier! It happened like this. I was giving a talk about poetry, in particular about how poetry can cleanse and renew our vision, help us see the familiar in a new way, kindle again the hidden light that God put in the hear of all things, and deep in our own hearts, the ‘light that lightens everyone who comes into the world’. Well that was the plan.

As always I was in a hurry and had forgotten to photocopy the poems in advance. Just minutes before the lecture I rushed into the admin office, hoping the kind lady there would help me with the fearsomely complicated photocopier. It’s one of those machines that has so many extra trays, feeders and blinking lights that it looks like a cross between a combine harvester and a spaceship! But the office was deserted; the lady was on her coffee break. In desperation I decided to have a go myself, and just put the sheaf of poetry into a random feeder tray, picked a number, pressed ‘go’, and hoped for the best. Sure enough multiple copies started spewing out the other end, but as I started to gather them, I heard a horrible graunching noise, warning lights flashed, and the whole machine ground to a halt with a clutch of poems halfway in and half way out.
The bell was going for my class! I glanced guiltily around, wrenched as much poetry as I could out of the crippled machine and headed for my lecture. But I had left my jacket in the office and when I crept back to get it afterwards, the door opened, an accusing finger pointed at me and a stern voice said : ‘Your poetry is jamming my machine!’ I was in trouble!

Well I apologised of course, and explained I’d had to rush off, but between us the secretary and I managed to free the jam and remove the crumpled remains of some of my poems from the machine. Just as I was leaving the office I glanced back and noticed that she was unfolding one of the crumpled pages and starting to read…

When I got home and thought about it all two things became clear; first, what a great line of poetry the phrase ‘your poetry is jamming my machine’ would make, why it even scans as a five-stressed line of ‘iambic pentameter’, and second, I owe that Lady something, maybe she would like a poem. The two thoughts coalesced and stirred me on to this:

My poetry is jamming your machine

It broke the photo-copier, I’m to blame,

With pictures copied from a world unseen.

My poem is in the works -I’m on the scene

We free my verse, and I confess my shame,

My poetry is jamming your machine.

Though you berate me with what might have been,

You stop to read the poem, just the same,

And pictures, copied from a world unseen,

Subvert the icons on your mental screen

And open windows with a whispered name;

My poetry is jamming your machine.

For chosen words can change the things they mean

And set the once-familiar world aflame

With pictures copied from a world unseen

The mental props give way, on which you lean

The world you see will never be the same,

My poetry is jamming your machine

With pictures copied from a world unseen

Luckily she liked this poem indeed it turned out that a little more poetry was just what she needed in her life, which in a way is what this poem is about.

We get trapped in what we think is humdrum until something or someone opens our eyes and lets us see the wonder around and within us.

Mount Horeb was just part of Moses’ daily commute, in the humdrum dead-end job he had looking after his father-in-law’s sheep until one day it all changed, one of the scrubby little bushes that dot the mountain side to which he had hardly given a second glance, was suddenly lit from within, alive and dancing with a coruscating light of joy and holiness that illuminated the bush and all around it and yet didn’t consume it, just let it continue to be its own newly glorious self. So Moses stopped, took off his shoes on Holy ground, and his life and our lives, changed forever…
The poet Elizabeth Browning said ‘earth’s crammed with Heaven and every common bush ablaze’, and she’s right, if only we had eyes to see. The priest-poet George Herbert put it perfectly in a poem that we sometimes sing as a hymn:

A man that looks on glass

On it may stay his eye

Or if he pleaseth through it pass

And then the heaven’s espy.

Well that’s my confession; they say it’s good for the soul. I’m happy to say that the photocopier got fixed, and last time I was in there I saw my poem had been pinned above it on the office wall! 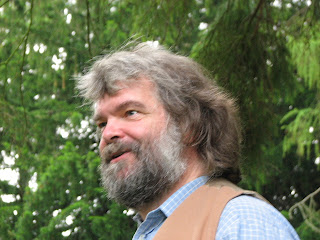 Born in Nigeria and raised in Africa and Canada, Malcolm Guite is a poet and singer-songwriter living in Cambridge, where he also works as a priest and academic. He is the author of Faith Hope and Poetry (Ashgate 2010, paperback 2012) and has published poems in Radix, The Mars Hill Review, Crux, Second Spring and Christianity and Literature. He is also a singer-songwriter and is currently front man for Cambridge rockers Mystery Train. His CDs The Green Man and Dancing through the Fire are out on Cambridge Riffs and iTunes. www.malcolmguite.com