A crisp clear January day in North Oxford.  A perfect day to explore.  These houses are all within a quarter of a mile of the dome of St. Hugh’s College:
John Ronald Reuel TOLKIEN (1892–1973), author and scholar, 20 Northmoor Road, Oxford
The house
Tolkien also lived at 99 Holywell Street, very close to the Bodleian Library, from 1950 – 1953.  Zoe had been to Tolkien’s Holywell Street house numerous times as one of her friends lives there.
Nirad C. CHAUDHURI (1897–1999), writer, 20 Lathbury Road, Oxford 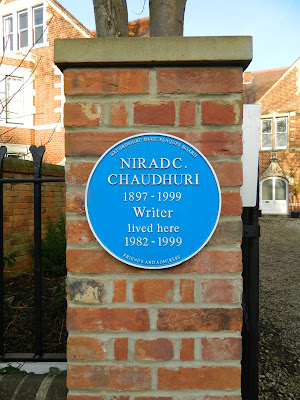 and here’s the house
Paul NASH (1889–1946), artist, 106 Banbury Road, Oxford
The house is now one of may houses that make up  d’Overbroeck’s College, which is not a Oxford college, but a secondary school
Sir James MURRAY (1837–1915), Lexicographer and Editor of the OED, 78 Banbury Road, Oxford 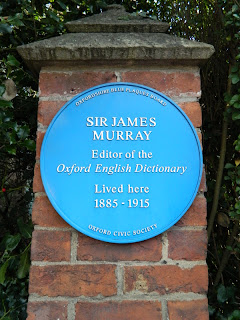 No, Sir James Murray did  not live in the pillar box, but

Anything addressed to ‘Mr Murray, Oxford’ would always find its way to him, and such was the volume of post sent by Murray and his team that the Post Office erected a special post box outside Murray’s house. (Wikipedia)

and a bit about James Murray

Some idea of the depth and range of his linguistic erudition may be gained from a letter of application he wrote to Thomas Watts, Keeper of Printed Books at the British Museum, in which he claimed an ‘intimate acquaintance’ with Italian, French, Catalan, Spanish and Latin, and ‘to a lesser degree’ Portuguese, Vaudois, Provençal & various dialects’. In addition, he was ‘tolerably familiar’ with Dutch, German and Danish. His studies of Anglo-Saxon and Mœso-Gothic had been ‘much closer’, he knew ‘a little of the Celtic’ and was at the time ‘engaged with the Slavonic, having obtained a useful knowledge of the Russian’. He had ‘sufficient knowledge of Hebrew & Syriac to read at sight the Old Testament and Peshito’ and to a lesser degree he knew Aramaic, Arabic, Coptic and Phoenician. However, he did not get the job. (Wikipedia)

A passer by told me that while the above house was Murray’s house, the block of flats below, now called Murray Court, is build on what was his rambling  grden where he build sheds for his daughters to work on the OED.
A little further south in picturesque Park Town I found the house of
William Richard MORFILL (1834–1909), first Professor of Russian and Slavonic Languages, 42 Park Town, Oxford
and even further south, almost at the University Parks, the home of  Walter PATER (1838–1894), author and scholar, and his younger sister  Clara Pater (1841–1910), pioneer of women’s education, 2 Bradmore Road, Oxford.
The front door — with gables looking rather old and ornate hinges. 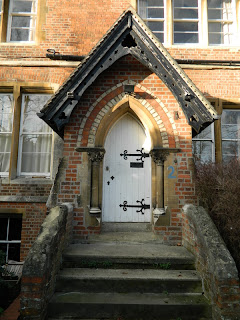 The whole building.  The right half was the Paters.
and I couldn’t resist including these even more ornate hinges on a door across the road, but of no known historical value. 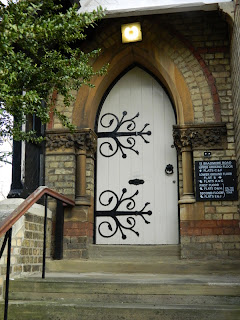 T. E Lawrence’s house (Lawrence of Arabia) is a little way away at 2 Polstead Road
On the way home, we stopped at C. S Lewis’s house — The Kilns, on what is now called Lewis Close, in Risinghurst in Headington.  The plaque is on the door nearest the road; formerly the tradesmen’s entrance.

A view from just outside the gate

A view from the car park
and a view of the opposite side
Certainly a large house, but quite plain.  Lewis bought it sight unseen, because it had eight acres of woods, now the C. S. Lewis Nature Reserve.
Finally, Dorothy Sayers was born in a house on the very narrow Brewer’s Street  backing onto Pembroke College, and opposite Christchurch, and near St. Aldate’s Church.