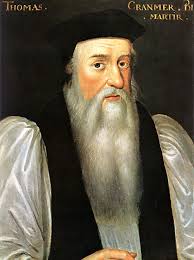 This beautiful building celebrates the 16th century Oxford Martyrs, Cranmer, Ridley and Latimer. The Victorian Gothic building resembles the spire of a sunken cathedral, doesn’t it?
At this spot, the English Reformers, Hugh Latimer and Nicholas Ridley, the great preacher and theologian of the English Reformation were burnt at the stake in the middle of cobble stoned Broad Street Oxford.
Cuthbert Bede (in his novel The Adventures of Mr Verdant Green) wrote,
“He who enters the city from the Woodstock Road, and rolls down the shady avenue of St Giles’, between St John’s College and the Taylor Buildings, and past the graceful Martyrs’ Memorial, will receive impressions such as probably no other city in the world could convey.”
After the accession of Mary I, Cranmer boldly said, “… all the doctrine and religion, by our said sovereign lord king Edward VI is more pure and according to God’s word, than any that hath been used in England these thousand years.” Not surprisingly, the government regarded Cranmer’s declaration as tantamount to sedition. He was sent straight to the Tower to join Hugh Latimer and Nicholas Ridley, tried for treason, found guilty, and condemned to death.
Latimer famously comforted Ridley, “Be of good cheer, Master Ridley play the man. We shall this day by God’s grace light such a candle in England as shall never be put out.”
(Though I am quite content to live in 21st century Oxford, they did speak the most gorgeous English in Renaissance England, didn’t they?).
Cranmer was a serious reformer with a mild and peaceful and timid disposition. Imprisoned by Queen Mary, he signed various recantationa of his Protestant beliefs, stating his support of the Catholic Church. However, she, rightly, doubted that he really meant them.  He was told that he would be able to make a final recantation but this time in public during a service at the University Church of St. Mary the Virgin. He wrote and submitted the speech in advance. At the pulpit on the day of his execution, he opened with a prayer and an exhortation to obey the king and queen, but he ended his sermon totally unexpectedly, deviating from the prepared script.
He renounced the recantations that he had written or signed with his own hand since his degradation and imprisonment, and stated that he would punish his right hand by burning it first.
He was pulled from the pulpit and taken to where Latimer and Ridley had been burnt.  As the flames drew around him, he fulfilled his promise by placing his right hand into the heart of the fire and his dying words were, “Lord Jesus, receive my spirit… I see the heavens open and Jesus standing at the right hand of God.”
Interestingly, the same vision the first martyr Stephen saw! Men do not lie at their hour of their deaths, I believe. How wonderful to imagine Jesus standing in encouragement to receive them!!