Thanks, Roy Mathias, for helping me write up, and choose photographs for this record of our brief 5 days in Prague!
And now, over to Roy:

What is the best time to visit Prague?   I have no idea, but we had a wonderful five days in late October autumn.  The city, being so old, is very compact;  walking is easy and interesting.

The Church of Adam and Eve

The two towers of this church are called Adam and Eve. The yellow buildings in front of the church actually touch the church, and so one can only enter the church through a small side door. Our hotel was only two blocks from the church so we frequently saw it.  From the back it looks almost like Hogwarts:

Marionettes are one of Prague’s souvenirs, and Irene ended up taking home a Pinocchio. 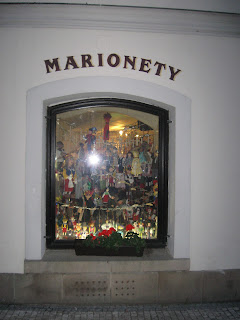 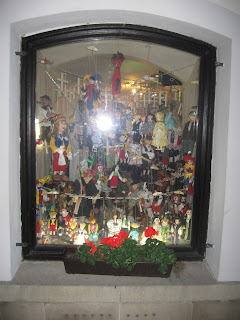 Everywhere you look there is something of interest:
Best friends 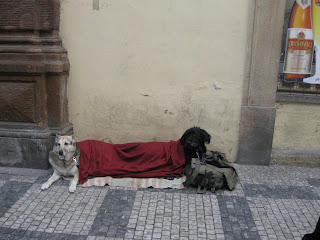 Prague has enjoyed many artistic styles.  The most recent is Art Nouveau.  Here is the town  hall–which included a cafe.  The guidebook told us to stop for a coffee and pastry, and not to miss the toilets!

There is museum dedicated to Alphonse Mucha (24 July 1860 – 14 July 1939), a leading artist in his day.  No photography allowed, so here are some pictures from the web.  Much of his work was work was in the form of advertising posters; like this for Job cigarettes.

His images are still a source of inspiration:

When the German invaded Czechoslovakia during the spring of 1939, Mucha was among the first to be arrested by the Gestapo. During his interrogation, he became ill with pneumonia, and died soon after he was released.

This clock tower, with the world’s oldest working astronomical clock (1410) is across the square from the Church of Adam and Eve.  Every hour a crowd gathers, the clock strikes, figures move, and real live uniformed humans at the top deliver a trumpet call.

The Jewish Quarter in Prague

There are two outstanding attractions in the Jewish quarter.  The  Holocaust memorial and attached  Jewish Cemetery and the fantastically ornate Spanish synagogue.

As always, the Jewish quarter was very crowded.  Here we see graves one on top of another, up to 12 layers deep.  The setting is a shady walled enclosure. 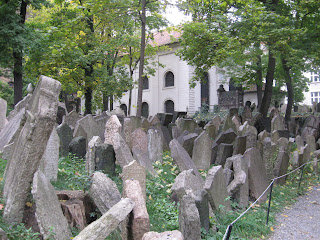 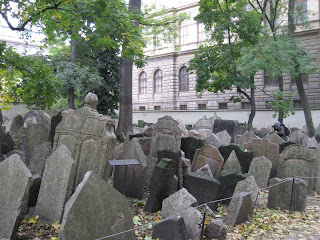 The Spanish Synagogue is in the Moorish Revival style, and hence the name.  The intriguing, though bland exterior

in no way prepares you for the interior, completely covered in rich gold, green, red, blue and black decoration.

Just outside the Spanish Synagogue is a statue of Franz Kafka 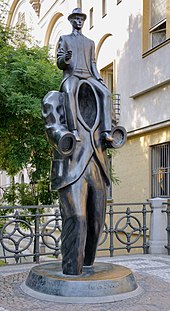 The Cathedral of St Vitus — Prague

The cathedral and castle are on the opposite side of the Charles river from the center of town and the areas above.   Here are a few pictures taken on the way 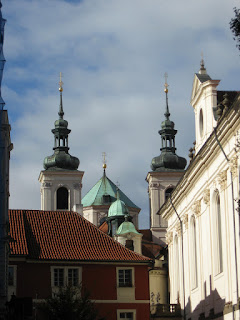 Here are two view of St. Vitus from the Charles Bridge. 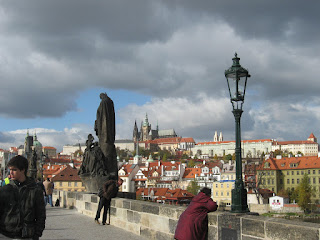 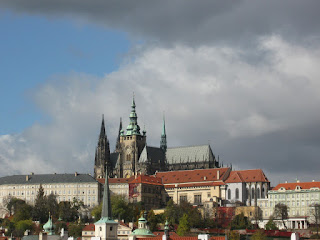 One of the many statues on the bridge.

The cathedral is still quite a walk from here — we took a taxi, and were greeted by a buskers 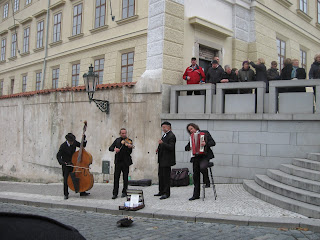 An areal view from a distance 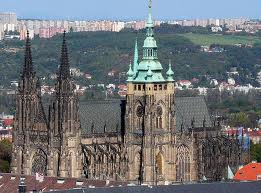 The South entrance to the Cathedral is called the Golden Gate 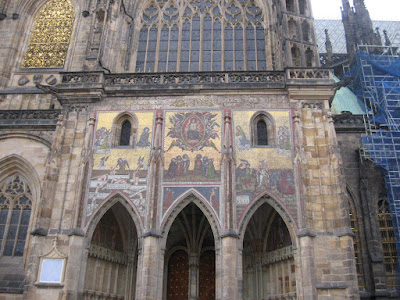 and the whole of the South side 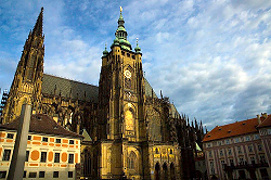 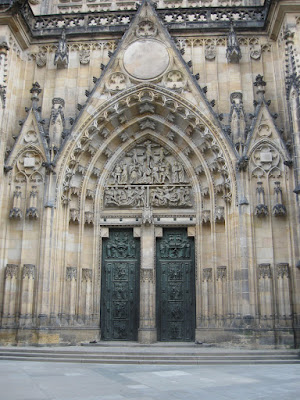 The central panes of the Much window 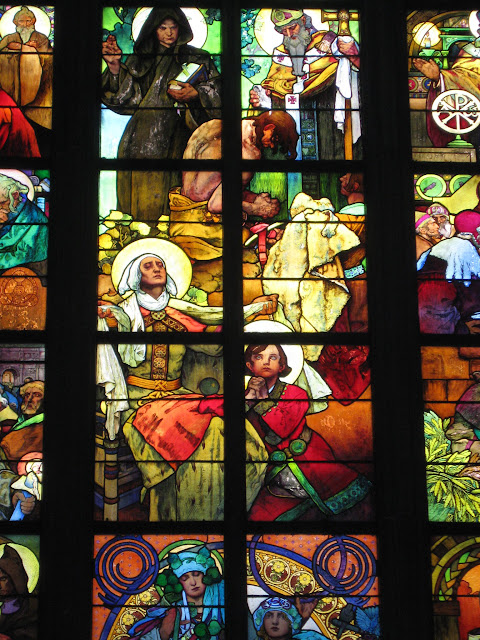 the lower part of the same window 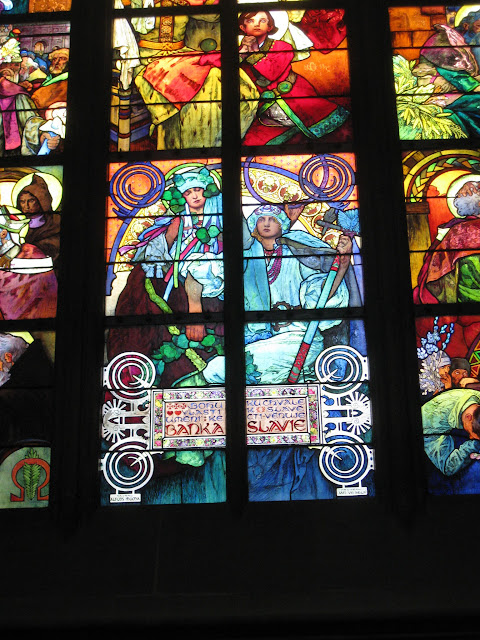 An unusual stained glass window.  It’s not the result of a shaky hand–it is really like this.  I do not recall the story behind it unfortunately. 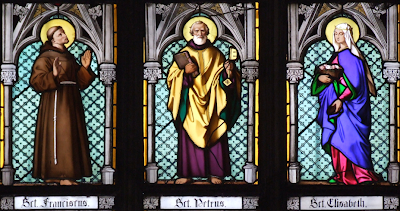 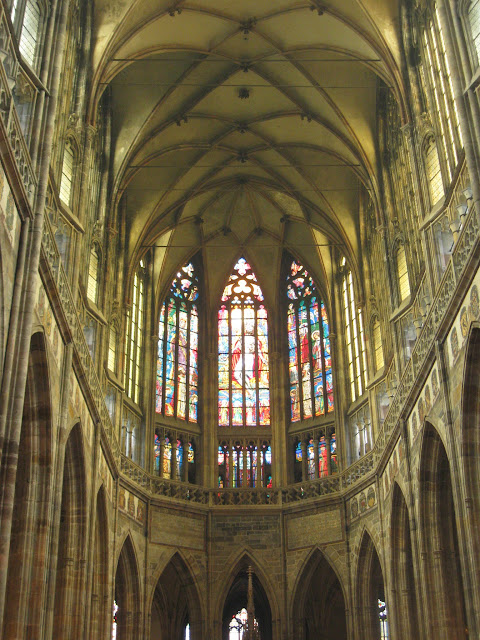 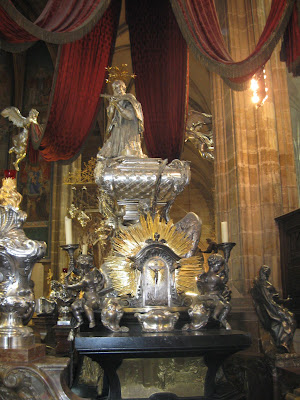 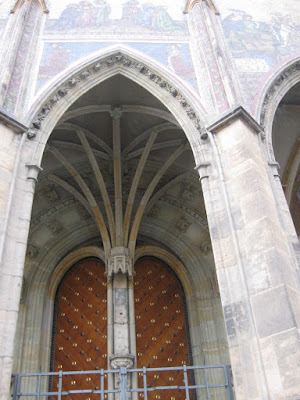 A view of the multitude of spires on the cathedral 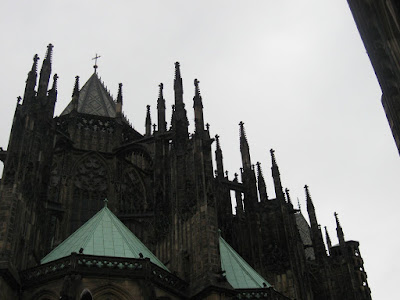 The cathedral is inside the grounds of Prague Castle.  Here is a a garret window in a near by building 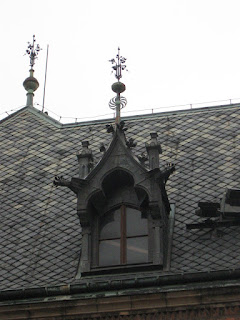