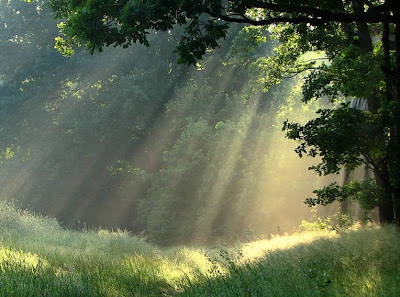 Image
Stuart asked me, “Do religion and spirituality mean the same thing?” Here’s my response:
To me, spirituality is our sense of God, of infinity and immensity. Every society we know of has been spiritual in some way. There are no entirely atheistic societies that I know of. Faced with the vastness, beauty and brilliance of creation, and our own smallness, most people instinctively sense a God behind it all.
When I consider the heavens the works of your hand,
The moon and the stars which you have made (Psalm 8)
this sense of wonder is not confined to religious people. The created world tells us much about God, since what may be known about God is plain , because God has made it plain. 20 For since the creation of the world God’s invisible qualities—his eternal power and divine nature—have been clearly seen, being understood from what has been made, (Romans 1:20).
Wordsworth expresses this pantheistic  areligious spirituality,
And I have felt
A presence that disturbs me with the joy
Of elevated thoughts; a sense sublime
Of something far more deeply interfused,
Whose dwelling is the light of setting suns,
And the round ocean and the living air,
And the blue sky, and in the mind of man;
A motion and a spirit, that
rolls through all things. Therefore am I still
A lover of the meadows and the woods,
And mountains; and of all that we behold
From this green earth;
Spirituality is a kind of DIY religion. Spiritual people can meditate, though the objects of their meditation can vary immensely. They may (or may not) believe in God, but this God is generally fashioned in the image of what their day and age believes a good human being should be.
I once met Iris Murdoch at a garden party at Somerville, when I was a student there. She said she meditated, but did not believe in God. A perfect example of a person being interested in things of the spirit, and even spiritual practices, without any religion at all.
All these can be part of non-religious spiritual experience: prayer, meditation, visions, dreams, revelations, ecstasy. And they can also be part of religious experience, in which case they add depth, joy and sweetness to it.
Religion, (in contrast to spirituality, which can vary in beliefs and experience so much so that one man’s spirituality can be unrecognisable to another) is a revealed set of beliefs, and most religions insist that their set of beliefs is right, and everyone else’s wrong. Mary McCarthy in her memoir, Memories of a Catholic Girlhood writes, “Religion is only good for good people.” The sense of being in on ultimate truth can bring out people’s pride, dogmatism and intolerance, and in that sense religion is far more dangerous than spirituality.
However, while most religions are based on revealed and written truths, spirituality can be a sort of jigsaw, patchwork, guesswork religion, each spiritual person piecing together a pastiche of what he or she believes.
I much prefer religion, well to be honest, the religion I believe in, Christianity. Essentially, because of the beautiful, breathtaking, brilliant figure of Christ.
And to a lesser extent, because of its beautiful, noble theological system, which makes sense to me, and satisfies my moral and aesthetic sense, and as my irritable cravings for logic and for the ineffable to make sense. I love reading the theology expressed in Paul’s writings. Just reading them expands my mind and spirit.
So while spirituality is an apprehension of the sublime and the divine, religion is a detailed description of the grounds of worship.
One can be spiritual without being religious. And people, sadly, have managed to be religious without being spiritual. They have understood the grammar without the poetry of the spiritual life, the letter without the spirit. These can make people arrogant, narrow-minded, dogmatic and judgmental. These people have been a menace to their churches and the societies in which they live, and as far as possible, I intend to steer clear of them!