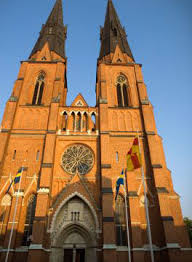 Enjoyed the Domkyrkan in Uppsala, Scandinavia’s largest cathedral, built in competition with the people of Trondheim, Norway. Very pretty, with flowery paintings on the noble stone.

It had a shrine to Dag Hammarskjold, the noble Swedish politician, who was in secret a committed evangelical Christian and a mystic.
Dag Hammarskjold–son of a Prime Minister of Sweden– was interesting: His vivid and intense spiritual life was kept secret while he ascended politically–Chairman of the Reserve Bank, Cabinet Minister, Secretary-General of the United Nations. After his probable assassination while trying to broker peace in the Congo,his journal, Vagmarken, Markings, which he had written since he was 20 was discovered–and published.
And here are some reflections from Markings

For all that has been
— Thanks.
For all that shall be
— Yes.
We are not permitted to choose the frame of our destiny. But what we put into it is ours.

Forgiveness is the answer to the child’s dream of a miracle by which what is broken is made whole again, what is soiled is again made clean.

God does not die on the day when we cease to believe in a personal deity, but we die on the day when our lives cease to be illumined by the steady radiance, renewed daily, of a wonder, the source of which is beyond all reason.
I don’t know Who — or what — put the question, I don’t know when it was put. I don’t even remember answering. But at some moment I did answer Yes to Someone — or Something — and from that hour I was certain that existence is meaningful and that, therefore, my life, in self-surrender, had a goal.
Never, “for the sake of peace and quiet,” deny your own experience or convictions.

The longest journey
Is the journey inwards.
Your cravings as a human animal do not become a prayer just because it is God whom you ask to attend to them.