My favourite short story writer, hands down, is Alice Munro. I love her jewelly miniaturist’s art, her contorted sentences, the elegaic tone which pervades her work, her sharp eye, her sense of hard-won wisdom, the sadness and beauty which breathes through her work.

Her work is restful, rejuvenating, a tonic for me. I love it!
I could not find my favourite Munro stories online, but here’s one from the New Yorker.

The Bear Came Over the Mountain

by Alice Munro
Fiona lived in her parents’ house, in the town where she and Grant went to university. It was a big, bay-windowed house that seemed to Grant both luxurious and disorderly, with rugs crooked on the floors and cup rings bitten into the table varnish. Her mother was Icelandic—a powerful woman with a froth of white hair and indignant far-left politics. The father was an important cardiologist, revered around the hospital but happily subservient at home, where he would listen to his wife’s strange tirades with an absent-minded smile. Fiona had her own little car and a pile of cashmere sweaters, but she wasn’t in a sorority, and her mother’s political activity was probably the reason. Not that she cared. Sororities were a joke to her, and so was politics—though she liked to play “The Four Insurgent Generals” on the phonograph, and sometimes also the “Internationale,” very loud, if there was a guest she thought she could make nervous. A curly-haired gloomy-looking foreigner was courting her—she said he was a Visigoth—and so were two or three quite respectable and uneasy young interns. She made fun of them all and of Grant as well. She would drolly repeat some of his small-town phrases. He thought maybe she was joking when she proposed to him, on a cold bright day on the beach at Port Stanley. Sand was stinging their faces and the waves delivered crashing loads of gravel at their feet.
“Do you think it would be fun—” Fiona shouted. “Do you think it would be fun if we got married?”
He took her up on it, he shouted yes. He wanted never to be away from her. She had the spark of life.
Just before they left their house Fiona noticed a mark on the kitchen floor. It came from the cheap black house shoes she had been wearing earlier in the day.
“I thought they’d quit doing that,” she said in a tone of ordinary annoyance and perplexity, rubbing at the gray smear that looked as if it had been made by a greasy crayon.
She remarked that she’d never have to do this again, since she wasn’t taking those shoes with her.
“I guess I’ll be dressed up all the time,” she said. “Or semi-dressed up. It’ll be sort of like in a hotel.”
She rinsed out the rag she’d been using and hung it on the rack inside the door under the sink. Then she put on her golden-brown, fur-collared ski jacket, over a white turtleneck sweater and tailored fawn slacks. She was a tall, narrow-shouldered woman, seventy years old but still upright and trim, with long legs and long feet, delicate wrists and ankles, and tiny, almost comical-looking ears. Her hair that was as light as milkweed fluff had gone from pale blond to white somehow without Grant’s noticing exactly when, and she still wore it down to her shoulders, as her mother had done. (That was the thing that had alarmed Grant’s own mother, a small-town widow who worked as a doctor’s receptionist. The long white hair on Fiona’s mother, even more than the state of the house, had told her all she needed to know about attitudes and politics.) But otherwise Fiona, with her fine bones and small sapphire eyes, was nothing like her mother. She had a slightly crooked mouth, which she emphasized now with red lipstick—usually the last thing she did before she left the house. 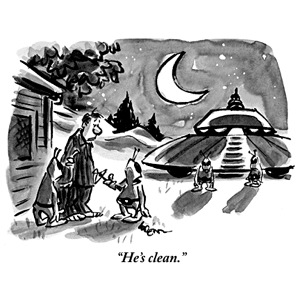 “I wouldn’t laugh,” he said to Grant—who did not think he had been laughing. “And if I were you I’d try to prepare Fiona.”