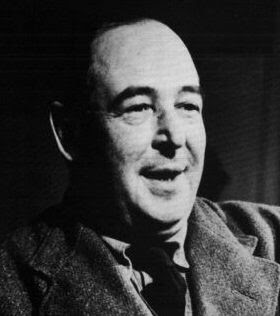 Owen Barfield noted that there were three Lewises–Lewis, the scholar, whose critical books are still read today; Lewis, beloved children’s and science fiction writer;  and Lewis, the Christian writer and apologist. So multi-sided a writer: it’s astonishing. Lewis also wrote a beloved memoir, Surprised by Joy entwining all these aspects of his personality.

I had become fond of Longfellow’s “Saga of King Olaf”: fond of it in a casual, shallow way for its story and vigorous rhythms. But then, and quite different from such pleasures, and like a voice from far more distant regions, there came a moment when I idly turned the pages of the book and found the unrhymed translation of “Tegner’s Drapa”, and read:

I heard a voice that cried
Balder the beautiful
Is dead, is dead,

I knew nothing about Balder; but instantly I was uplifted into huge regions of the northern sky; I desired with almost sickening intensity something never to be described (except that it is cold, spacious, severe, pale and remote) and then…found myself at the very same moment already falling out of that desire and wishing I were back in it.

In becoming a Christian, he recovers the things which were most precious to him– imagination, creativity, wonder, beauty, poetry, literature, mythology—all enhanced.

All which I took from thee I did but take,

Not for thy harms.

But just that thou might’st seek it in my arms.

All which thy child’s mistake

Fancies as lost, I have stored for thee at home”

Francis Thompson, The Hound of Heaven.

W.B. Yeats observes in his autobiography that when he wanted to know if a man could be trusted he watched to see if he associated with his betters (his intellectual and creative superiors).

Lewis’s road to faith–as befits a bookish man, much of whose life was lived in, and mediated and refracted through books– was through the ivory tower of  reading and other writers. What a melange of writers brought him to faith—Plotinius!!, Phantastes by George Macdonald, which baptized his imagination, and introduced him to the feel of “holiness,” and G.K. Chesterton’s The Everlasting Man, a portrait of the central position of Christ in human history, which baptized his intellect.  “In reading Chesterton, as in reading MacDonald, I did not know what I was letting myself in for. A young man who wishes to remain a sound Atheist cannot be too careful of his reading. . . . God is, if I may say it, very unscrupulous.” Lewis comments.

He was a man most blessed in his friends.  Owen Barfield rids him of his “chronological snobbery,” the “uncritical acceptance of the intellectual climate common to our age and the assumption that whatever has gone out of date is on that count discredited.”

During a now-famous all night walk, Tolkein and Dyson convince him that Christianity had elements of the myths he loved, the God who died to redeem, except it was a true myth, the ultimate story in which alone the longings and tales of redemption in all great myths were historically realized.  “The story of Christ is simply a true myth,” he says he discovered that night, “a myth working on us in the same way as the others, but with this tremendous difference that it really happened.”

As Adam Gopnik says in The New Yorker, “This was a new turn in the history of religious conversion. Where for millennia the cutting edge of faith had been the difference between pagan myth and Christian revelation, Lewis was drawn in by the likeness of the Christian revelation to pagan myth. Even Victorian conversions came, in the classic Augustinian manner, out of an overwhelming sense of sin. Cardinal Manning agonized over eating too much cake, and was eventually drawn to the Church of Rome to keep himself from doing it again. Lewis didn’t embrace Christianity because he had eaten too much cake; he embraced it because he thought that it would keep the cake coming, that the Anglican Church was God’s own bakery.”

Faith for Lewis was a recovery of the sense of childlike joy and possibility, of infinite worlds within worlds. I must say it feels the same to me.

As a believer, he can return to the magical lands of his childhood, and in a sense see them for the first time. As he writes in “Surprised by Joy” “My first taste of Oxford was comical enough. I had made no arrangements about quarters and, having no more luggage than I could carry in my hand, I sallied out of the railway station on foot to find either a lodging-house or a cheap hotel; all agog for “dreaming spires” and “last enchantments.” My first disappointment at what I saw could be dealt with. Towns always show their worst face to the railway. But as I walked on and on I became more bewildered. Could this succession of mean shops really be Oxford? But I still went on, always expecting the next turn to reveal the beauties, and reflecting that it was a much larger town than I had been led to suppose.

Only when it became obvious that there was very little town left ahead of me, that I was in fact getting to open country, did I turn round and look. There behind me, far away, never more beautiful since, was the fabled cluster of spires and towers. I had come out of the station on the wrong side and been all this time walking into what was even then the mean and sprawling suburb of Botley. I did not see to what extent this little adventure was an allegory of my whole life.

He looks back and recovers joy. In fact, I believe the things we loved and which turned us on as children are treasure-hunt clues hidden in our childhood by a good God–clues to the destiny and life’s work he has planned for us.

Gopnik goes on to say that his new-found faith got Lewis “to write inspired scholarship, and then inspired fairy tales. The two sides of his mind started working at the same time and together.”

And that is always how it is when one finds a voice, or finds oneself as a writer. Things one has thought, and felt, and read, and learned, and suffered and dreamed suddenly coalesce in a magical amalgam.

And in his forties, Lewis begins to work in fantasy, first science fiction, and then in his late forties, he begins to write very quickly and “almost carelessly” about the magic world of Narnia, which, as Gopnik puts it, “includes, encyclopaedically, everything he feels most passionate about: the nature of redemption, the problem of pain, the Passion and the Resurrection, all set in his favoured mystical English winter-and-spring landscape.”

New writing, a new thing, in one’s late forties, forged through a combination of one’s natural intelligence, gifts and interests, touched and sanctified by religious faith and love. What a very, very inspiring story!