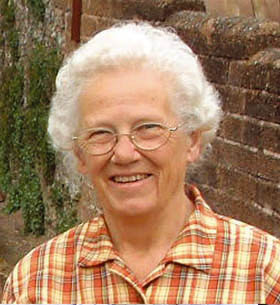 I love this story I quote verbatim:

And by asking and answering that question honestly, she became a very well-educated, disciplined, young woman physician. And after she graduated from Cambridge and got her hospital training, she gave her life to the Lord for missionary service in the northeast corner of the Belgian Congo in the community of Nobobongo. And she served their in the fifties and sixties eleven solid years of sacrificial, loving service to the African people. She did leprosy work, children’s work, built a hospital, built a Bible school. And then, in 1956… in 1964, in 1964 the Simba Uprising took place in the Congo, what we here in distant America called the Congo Rebellion. And the tribal people rose up, and the foreigners were ruthlessly treated.

Now – and Helen Roseveare went through that. Now I didn’t know anything about that, I did’t know anything about her, and I’ll never forget the first time I met her. I was a guest teacher for ten weeks at Columbia Bible College in South Carolina. My wife and I and our four kids were living in the men’s dorm in two dorm rooms that they put together in a makeshift little apartment for us. We were living there for ten weeks while I taught several courses in the school. And one night at nine o’clock at night, word came through the men’s dormitory that all the men were to leave their studies, and to go to the central lobby, because a woman missionary was passing through campus that evening, she couldn’t stay for the next day, and so they wanted the men to hear her give a brief word of testimony about her missionary work in Africa.

Well, to be real honest with you, none of the boys were very excited, you know. And, but the school said they had to do it, so we all went to the main lobby of the men’s dorm, and when we got there, the guys were in there, they were draped over the couches, sitting on the floor, and kind of looking like they didn’t want to be there. And, and then two of the school administrators walked in with Dr. Roseveare standing between the them, and when we saw her, everybody’s worst fears were well-founded, because she looked like a missionary. Whatever that means.

Simple cotton dress. Gray hair pulled back in a bit of a bun. Very thick, coke-bottle glasses, because her eyesight was not good. And she was tired. So somebody grabbed a gray, folding, metal Samsonite chair and put it in the middle of the floor, and, and, and she sat on it, and they said, ah, “Gentlemen, this woman, Dr. Roseveare, has just come through our campus, we just want her to share a little bit of her experience with you tonight.” And so she started to give her testimony. And being the astute woman that she is, about two minutes into her testimony, she knew that most of those guys were not interested at all, and so she stopped.

And she said, “You know what, boys, I don’t want to bore you with the details of my life. You’ve probably heard different stories and so forth. So, it’s late, why don’t we just take another five, ten minutes or so and, and I’ll just answer questions. Maybe, you know, you have a question, I’d rather talk about the things you’re interested.” And this kid immediately stuck his hand up, I feel sorry for him to this day, he stuck his hand up, and he said, he said, “Yeah I’ve got a question,” he said, “You know, we’ve got missionaries coming through here all the time, and, and they’re always talking about, you know, paying the price and suffering for Jesus – what did you ever suffer for Jesus?” She sat there and looked at him and, without any bitterness or any anger, she said, “Well, during the Simba Uprising, I was raped twice.” Everything got real quiet.

And then she told us about the rape. She told us how the government soliders came to her bungalow that night, came inside, ransacked it, grabbed her, beat her, threw her to the floor, kicked in all of her teeth. And then two army officers, one at a time, took her to her own bedroom and violated her body by raping her. And then, after the second incident, she was dragged from that bungalow out into a clearing and tied to a tree. And standing around the tree were all the laughing government soldiers. And then, while she was standing there, beaten and humiliated and violated and ridiculed, someone discovered in the bungalow the only existing hand-written manuscript of a book that she had been writing about the Lord’s work in the Congo over an eleven year period. They brought it out, put it on the ground in front of her, and burned it.

And as she saw that book go up in smoke, through clenched teeth, she said to herself: “Is it worth it? Is it really worth it? Eleven years of my life poured out in selfless service for the African people and now this.” And then she told those boys in that dormitory room that night as we all sat there spellbound, she said, “And boys, the minute I said that, God’s Holy Spirit settled over that terrible scene, and He began to speak to me, and this is what He said. He said to me: ‘Helen, my daughter Helen, you’ve been asking the wrong question all your life. Helen, the question is not, “Is it worth it?” The question is: “Am I worthy?” Am I, the Lord Jesus who gave His life for you, worthy for you to make this kind of sacrifice for me?'” And by her own tearful testimony she told us how God broke her heart, she looked up into the face of Jesus and said, “Oh Lord Jesus, yes, it is worth it, for thou art worthy.”

Elisabeth Elliot, whose husband was one of the five men who died trying to reach the Auca Indians, has written a very interesting chapter in a book entitled, “The Unfinished Task.” I tried to get them to stock it at the book table here for this conference but unfortunately, it’s out of print, you can find it in a, in a library, maybe in this church library. “The Unfinished Task,” and in there she’s written a chapter entitled, “Reflections on the Death of Five Missionaries.” And she asks and answers three questions. Number one: Were they called? Number two: Did they obey? And number three: Was it worth it? And in answer to that last question – was it worth it – this is what she writes, Elisabeth Elliot, listen carefully, she said this:

“Finally, was it worth it? Does it make sense that five men with those kinds of qualifications should die for the sake of sixty people? By whose standards can we answer that question? Well, we say, lots of Auca Indians got saved. I’ve heard stories of thousands of volunteers to the mission field. I’m not sure if they’re there today. I know there are some. People everywhere tell me they were moved and changed by the story. Hundreds of young men have told me that the book, ‘The Shadow of the Almighty,’ has changed their lives. I don’t deny that for a moment. Suppose it’s all true – does that make it worth it? Let’s suppose for a moment that not one Auca Indian got saved, that not one person ever heard the story of those five men, let alone was changed by it. Would it be worth it?”

And then she continues to write, “Yes!” She writes, “Yes!” “Why?” she writes, “Because the results of my obedience to God are the business of God almighty who is sovereign. It is the love of Christ which constrains us. There is no other motive for missionary service that will survive the blows of even the first year. We do it for Him.”

Advice from Helen Roseveare: Above all else, keep the daily quiet time apart with God. Let nothing squeeze this out of your timetable. This is where you grow, where he can teach and change you into his likeness: where he can speak to you, direct you, encourage you, and where he maintains the spirituality of your service. Paul said: ‘pray continually’ (NIV) ‘without ceasing’ (AV) (1Thes 5:17).

Does this sound impractical? Beware! It is scriptural – and the Lord knows just how busy you are! The busier you are, the more you need to pray. We have to learn to use all the spare moments, and to bring everything to God in prayer. There is nothing too small or insignificant to bring to him in prayer. Talk everything over with the Lord – the disappointments, problems and joys. We can pray as we scrub up, as we wait for the traffic lights to change, as we peel the potatoes.