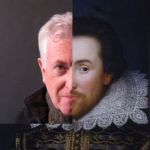 Hamlet’s Dresser by Bob Smith is a highly unusual book. I enjoyed it!

Bob Smith’s life was shaped by the care of his younger sister, Carolyn, born with cerebral palsy and severe mental retardation (she only mastered six words). She was epileptic, incontinent, stubborn and disturbed. (After one move, she stands for three years in the kitchen, day and night, sleeping standing up, kicking the refrigerator, in which she found safety).

His mother checks out emotionally, and grows increasingly distraught and depressed under the strain of caring for Carolyn. His father is disengaged and eventually competitive with Bob who grows into an exceptionally beautiful boy. As Bobby tells it, he bore the responsibility of bathing, changing, amusing and caring for his sister from the time he was four or five.

His domestic responsibilities, and the odour of Carolyn’s accidents make other friendship impossible. In addition, he is suspected of, and ridiculed for, being gay by his father, grandfather, grandparents, and schoolmates, which leads to extreme ostracism. Tortured homoerotic sexuality is one of the undercurrents of the novel.

Bob takes to doing his homework in the Stratford, CT library to escape his crying sister, and his mother’s demands to “wipe her good.” He sees Shakespeare in a stained glass window and asks who he was.  The stern librarian gives him a copy of The Merchant of Venice.

He is ten, and reads the opening of The Merchant, and a voice five centuries old reaches out to him with enchantment…

“Ten simple monosyllabic words, and of course, I couldn’t know what sooth meant, but it’s hardly necessary. It changes nothing in the simple declarative sentence, a sentence that could not more perfectly describe the kid reading it.

I think that the more confused you are inside, the more you need to trust a think outside yourself. I was desperate to lean against something bigger than me, and it’s clear that William Shakespeare understood what it’s like to ache and not know why.

In our house, silence was the code. Like many people, we avoided talking about what most needed talking about. Shakespeare became my secret language, an ancient remote cuneiform speech that somehow made me more visible to myself. Poetry became a beautiful place to hide from my life, and from my parents, a place I knew they would never follow me to. “

He was an excellent student, until, in high school, he stops caring about academic work. Instead he reads Shakespeare, compulsively, uncaring whether he understands it correctly or not, whether he is pronouncing it correctly or not, the way I used to read sections of Julius Caesar, Macbeth, The Tempest or The Midsummer Night’s Dream starting when I was eleven, copying out passages in a voluptuous daze in study hall, again and again until I knew them by heart.

Smith begins to construct an alternative world, when he falls in love with the art in the Met on a school trip. He takes the train there every Saturday, until he knows every piece in the Met well, and then moves on to the Frick, and then the Isabella Gardener and the Boston Museum of Fine Arts.  Taking a sandwich and a Shakespeare play in his rucksack, he finds solace and escape.

When life is unbearably difficult, one craves an escape—an addiction if you like. What a beautiful, healthy escape he chose: Shakespeare and art.

Life changes when he gets a role as Hamlet’s Dresser in the Stratford Shakespeare festival. By immersing himself in the magical words and music of Shakespeare’s lines, and in Shakespeare’s wisdom and insight, Smith grows and enlarges over a few seasons of touring with the company.

He adores his beautiful, fragile, tortured sister: a can’t live with her, can’t live without her scenario.   His parents finally institutionalise Carolyn. For forty years, neither he nor his mother could bear to visit her, protecting their bruised hearts.

This abandonment of his heart’s beloved sister is a painful shadow hanging over the book. The memoir is awkwardly structured, hopscotching between his unbearably painful childhood, backlit and illuminated by Shakespeare; his present as a sixty year old writing the book in Stratford, CT; and his present experiences of teaching Shakespeare to seniors.

Almost as if passing on the love he can no longer show his sister, he teaches Shakespeare classes in senior centres, and it is the bright point in the old people’s lives, keeping them alive by adding intellectual, human, emotional and artistic interest to their lives. In a sense, his love and care for these old, needy people is a payback to the universe for his abandonment of his sister. “I am most certainly haunted by a delicate and undismissable ghost,” he says.

Reading the book, or listen to it read by Bob Smith on a Blackstone audio version. It will help you see the beauty and power of Shakespeare afresh, and perhaps fall in love with him again.