We had a peaceful afternoon exploring Monreale Cathedral and the adjacent 12th century Benedictine Cloister with its 200 twin columns each with intriguing individually carved  capitols.  Monreale Duomo  is a  12th Century cathedral with some of the world’s best mosaics.   The mosaics are far more extensive than those in St. Mark’s in Venice.  I have only shown a few here. 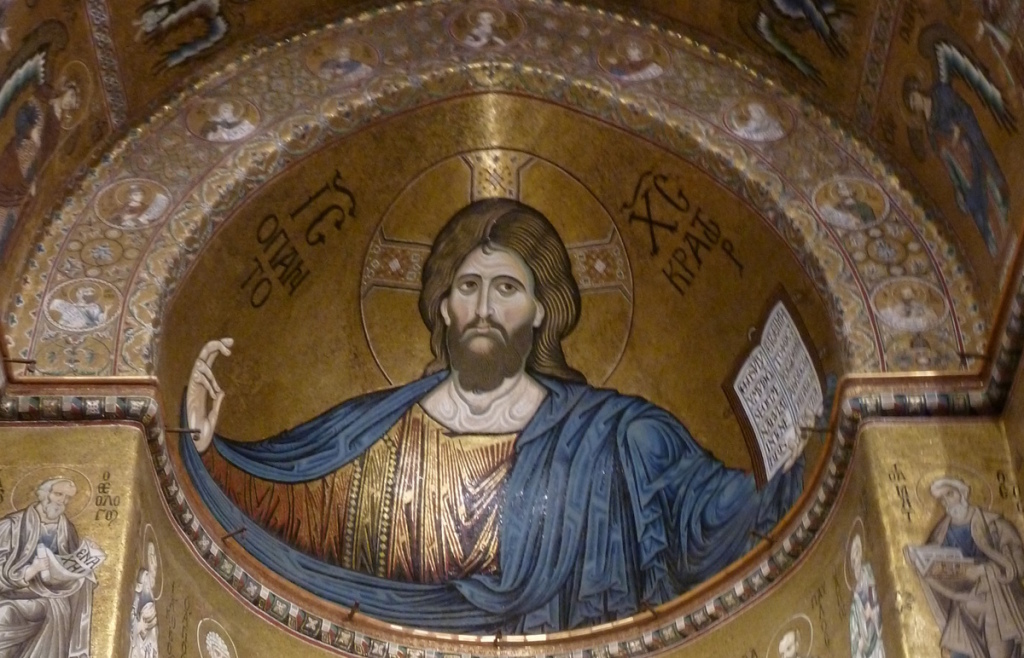 The  mosaic of Christ Pantocrator is 20 metres high (Monreale Duomo)

Here is the full view of the apse 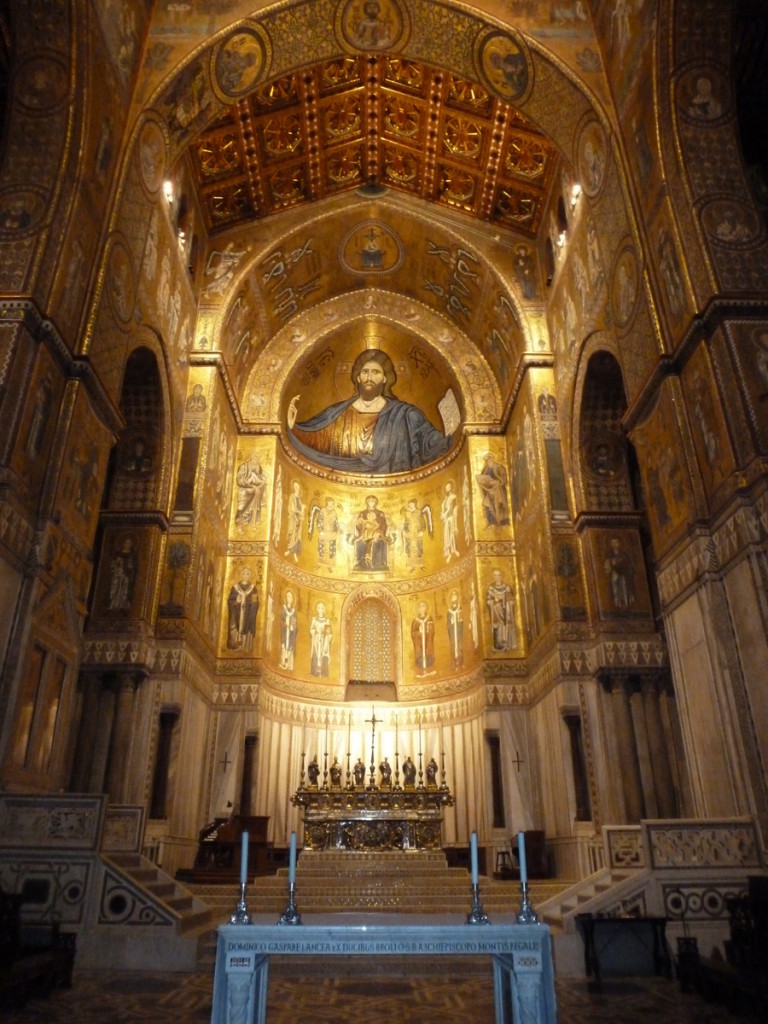 There are several rows of mosaics, retelling events from the Old and New Testaments.   Here is the section for Noah’s Ark (not usually seen in church art), the tower of Babel and the beginning of Abraham’s story 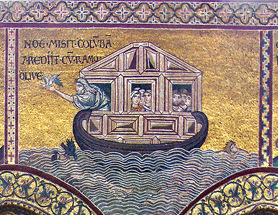 Here is Jacob’s dream of a ladder to heaven: 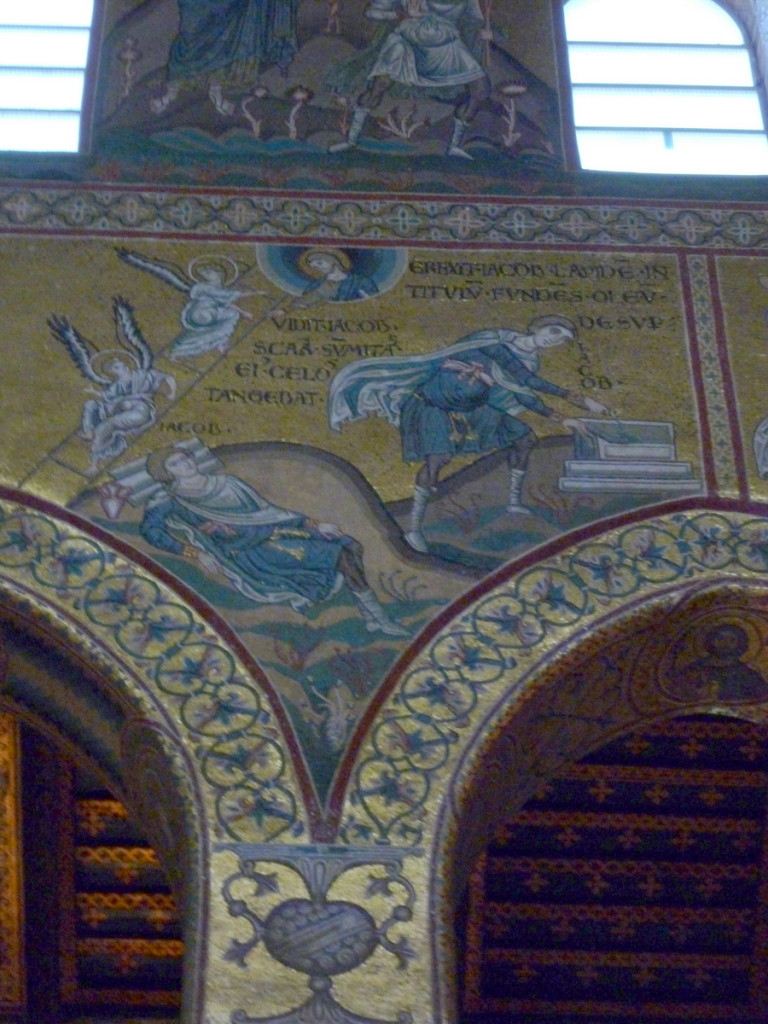 Here is Paul being lowered out of Damascus in a basket. 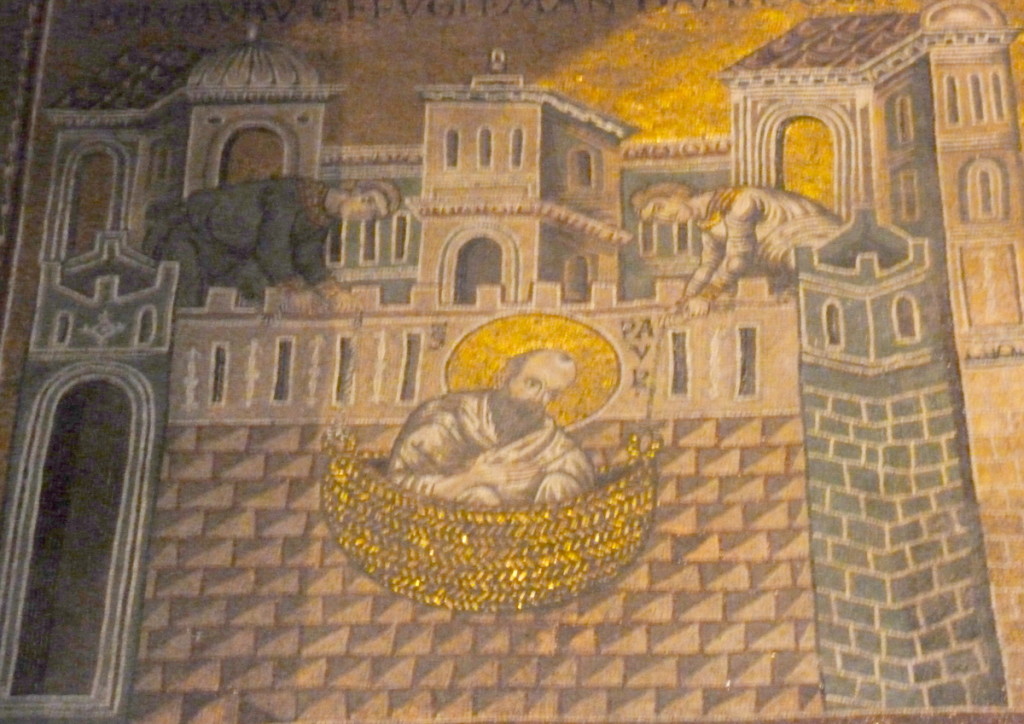 Perhaps the most interesting are the artist’s view of heaven.

Angels (or winged creatures?) offer praise around the throne. High above the altar. (Monreale Duomo)

The apse also has mosaics of the Virgin, and saints 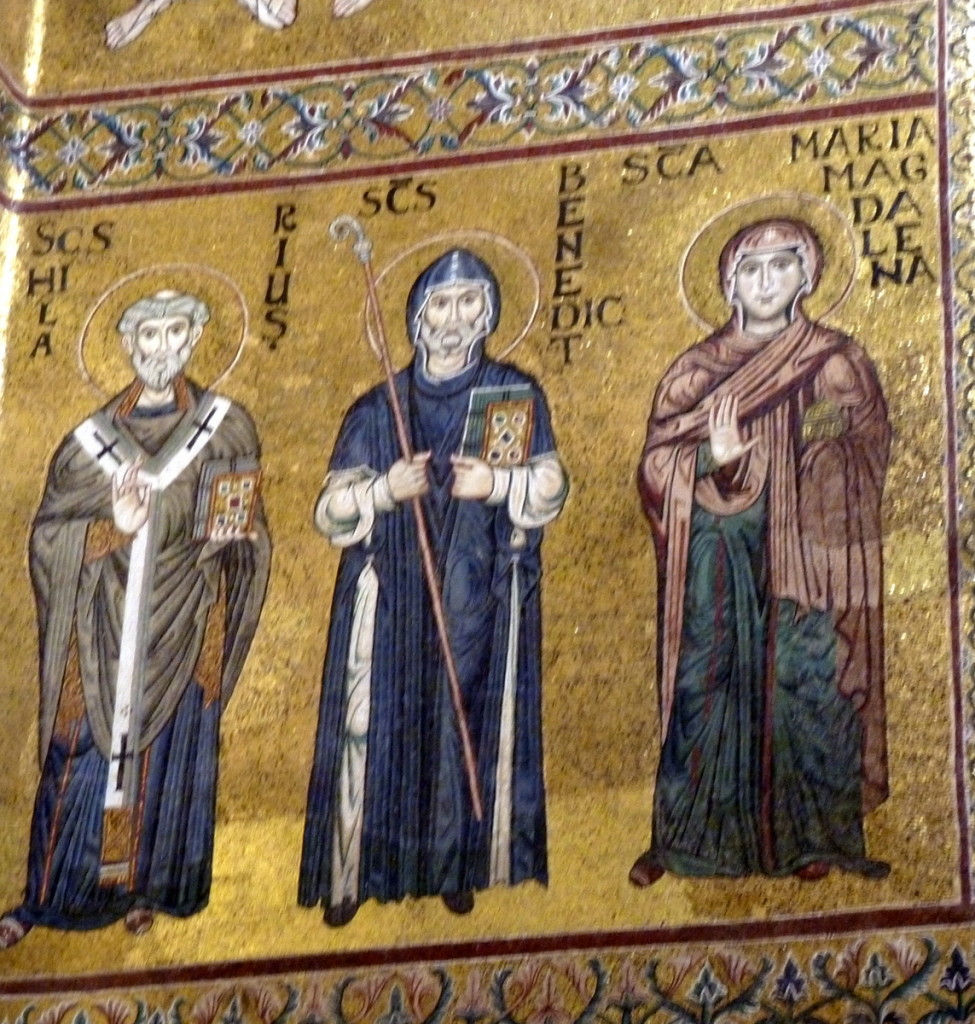 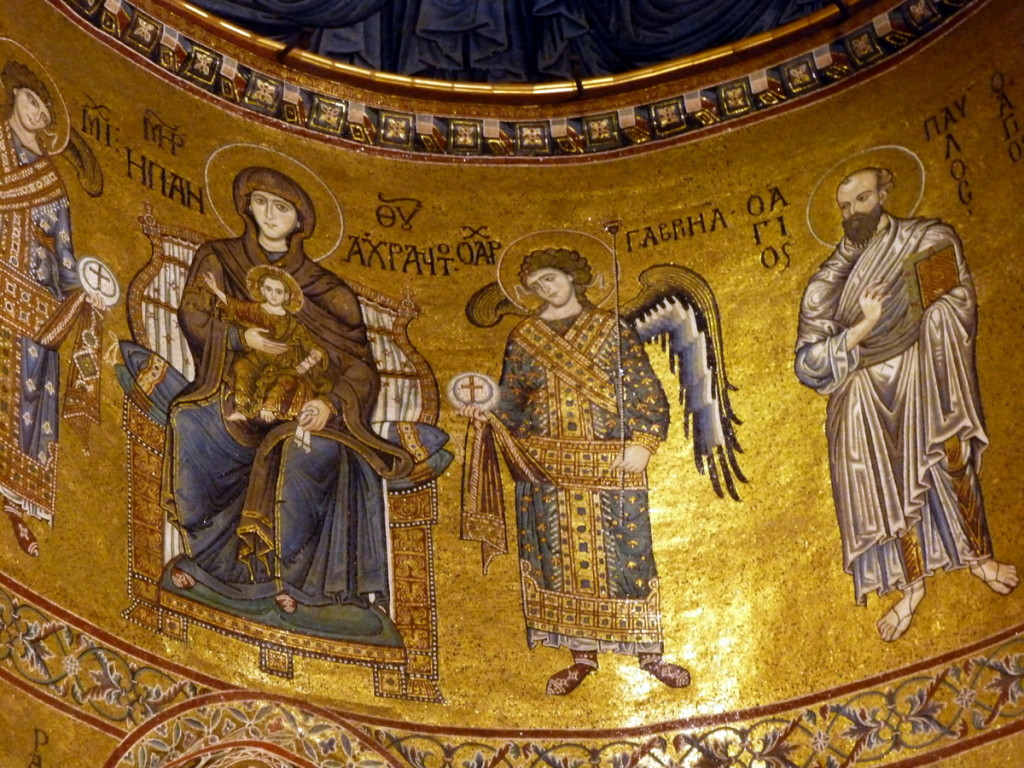 The north transept is rather different, being decorated in marble. 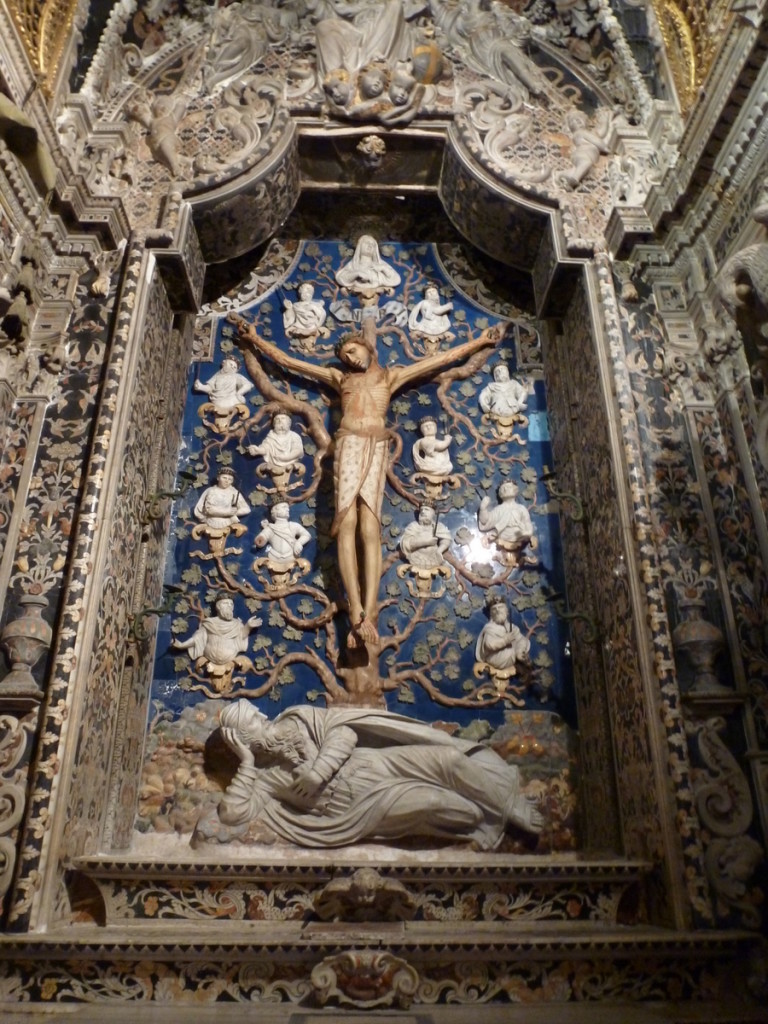 Crucifix behind the altar in a side chapel off the north transept. (Monreale Duomo) 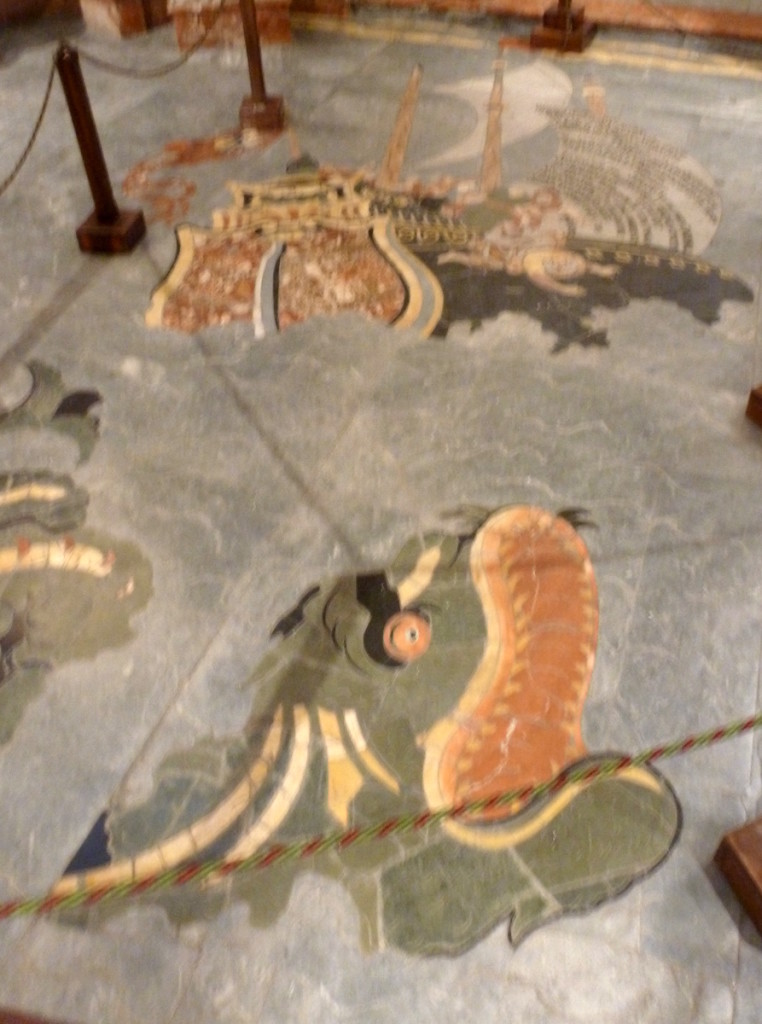 One sees the Arab influence in the floor mosaics 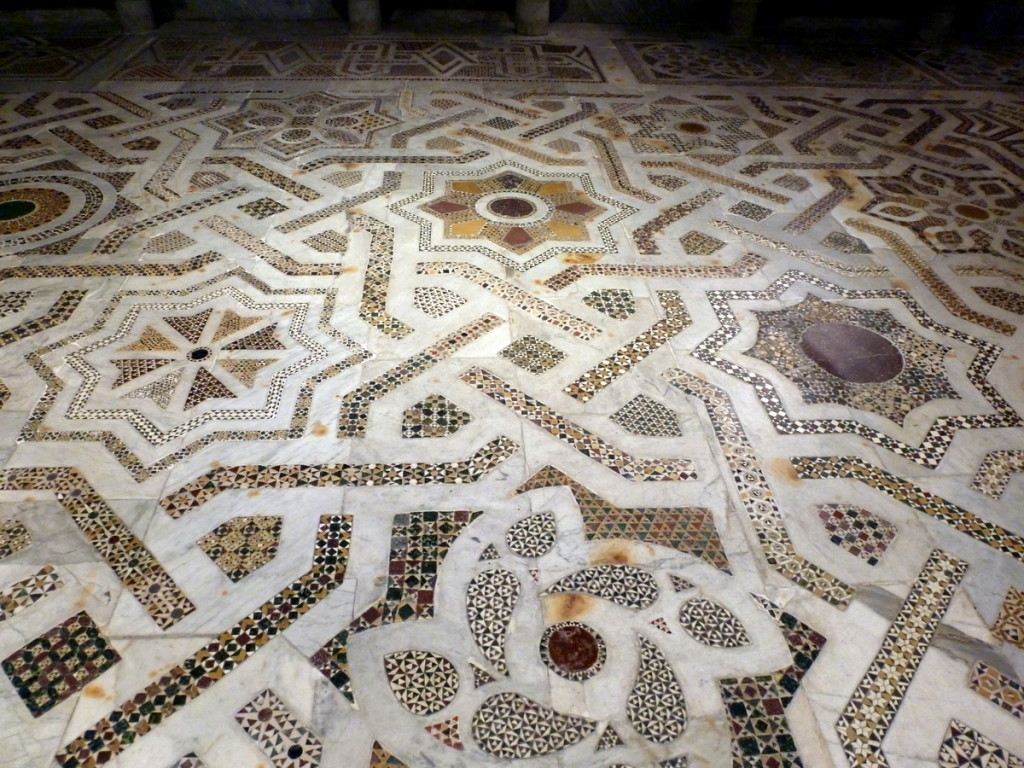 Monastery cloisters are generally very peaceful meditative places, and Monreale’s is no exception.  There main attraction are  the twinned pillars, each pair has individually carved capitols.  Unlike the mosiacs in the duomo which display the progression of Biblical history, there appears to be no pattern in the capitols, each is a surprise. 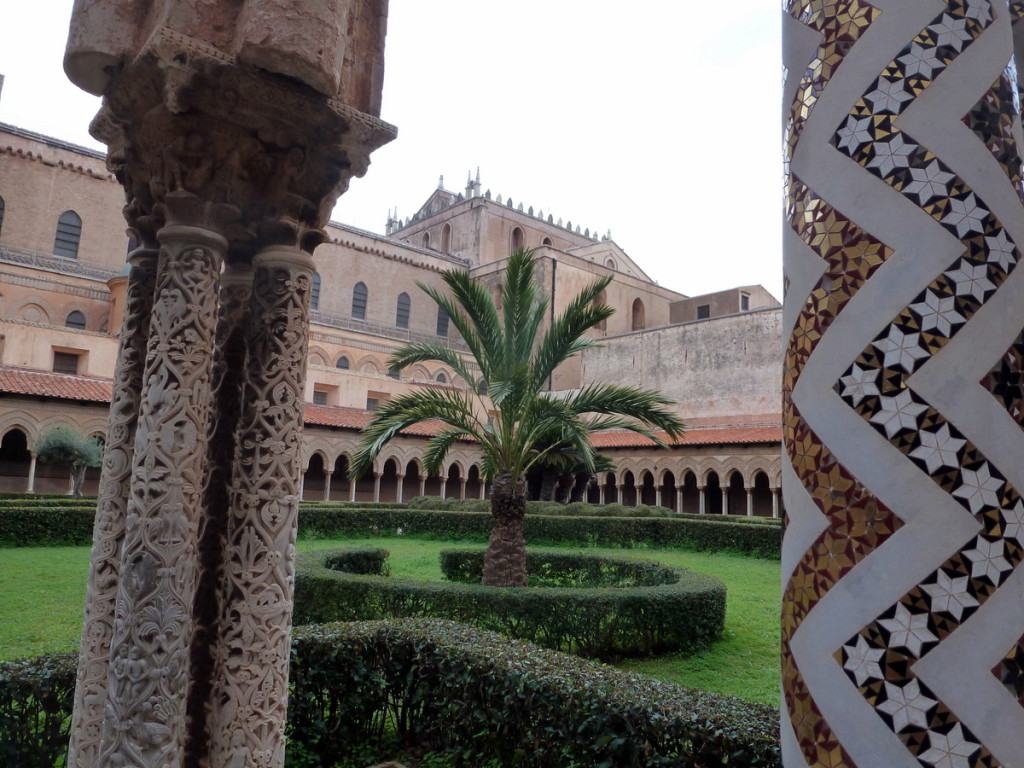 Of course, Adam and Eve were there, but not in any special position: 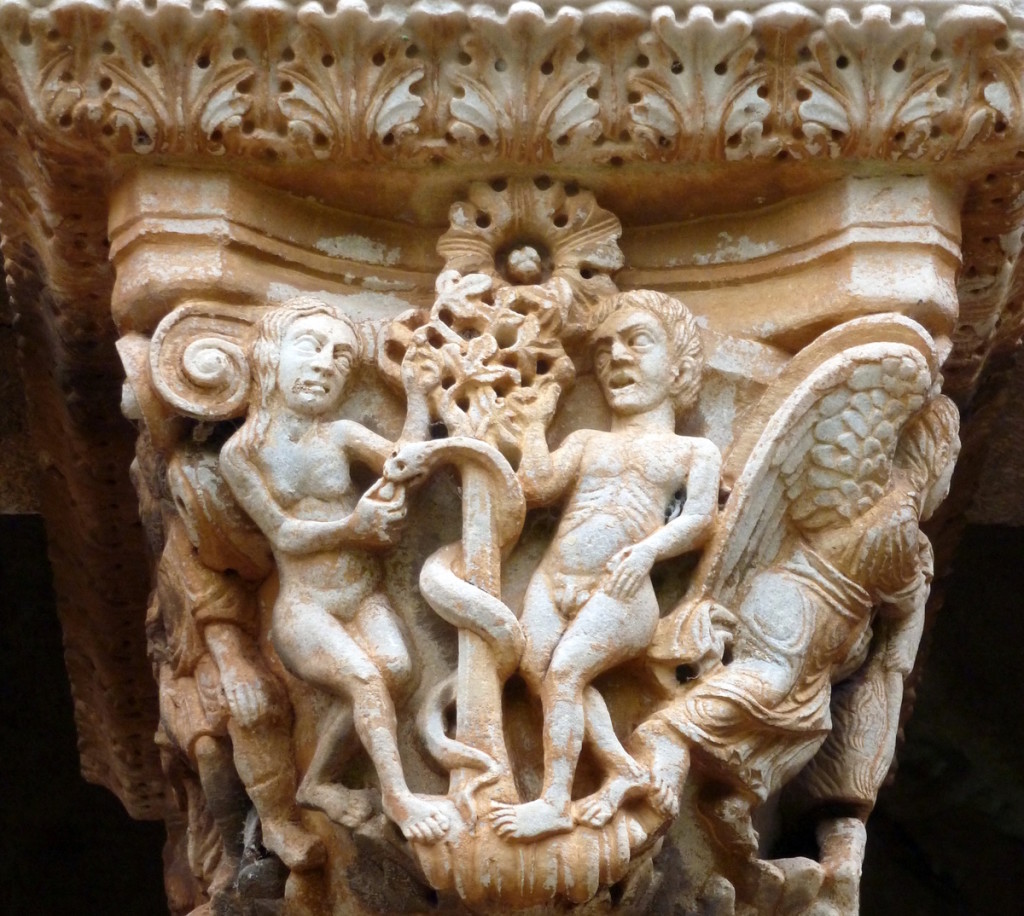 and here is Samson (identified for us) 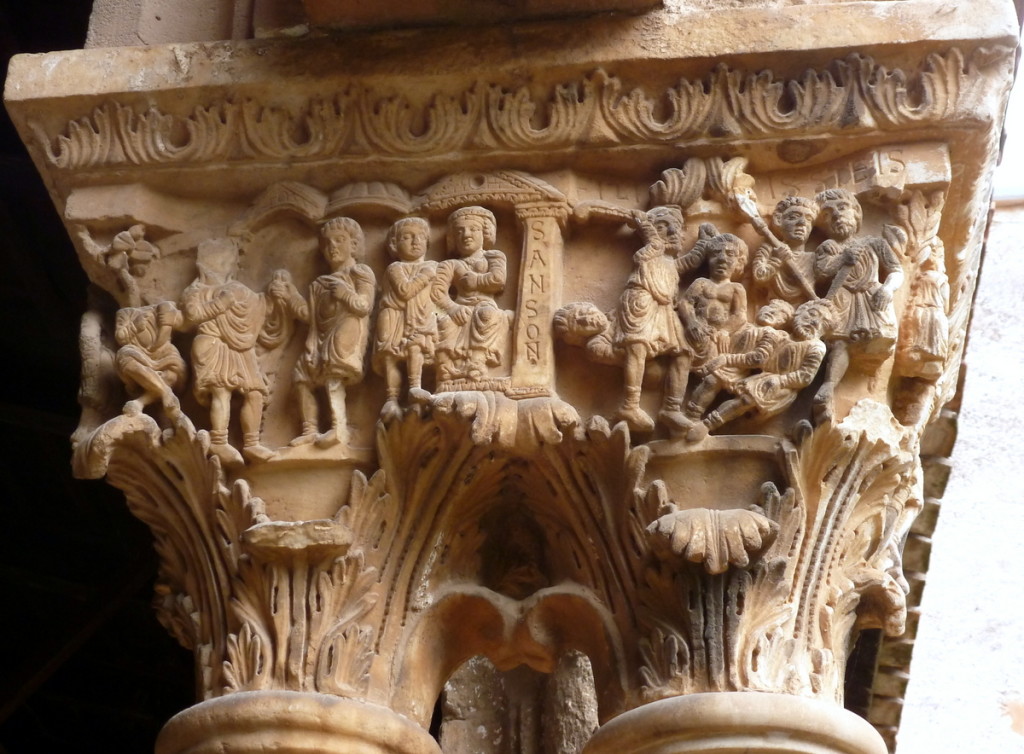 but most of the capitol sculptures were more obscure scenes of battles, real and mythological creatures 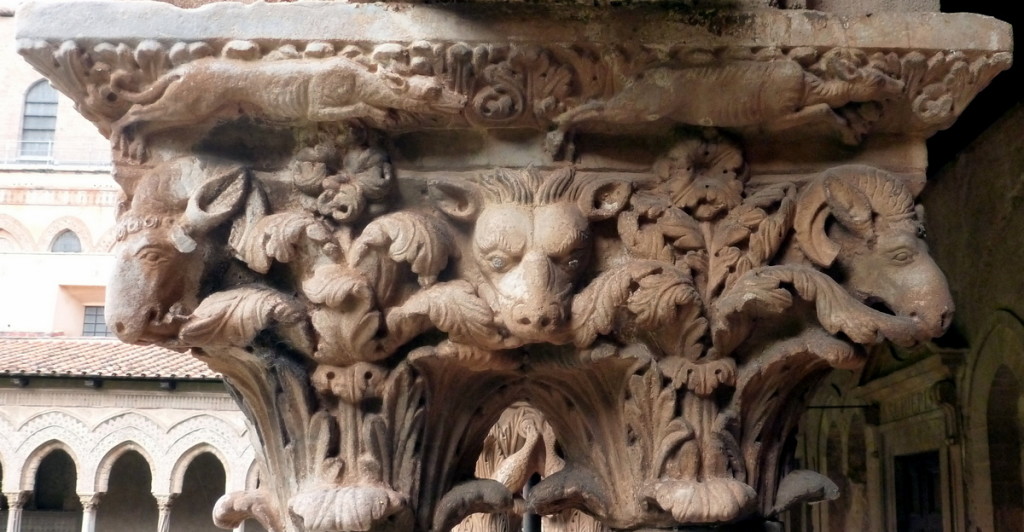 An acrobat. (This position, also shown on the body of some of the pillars, clearly signifies something) 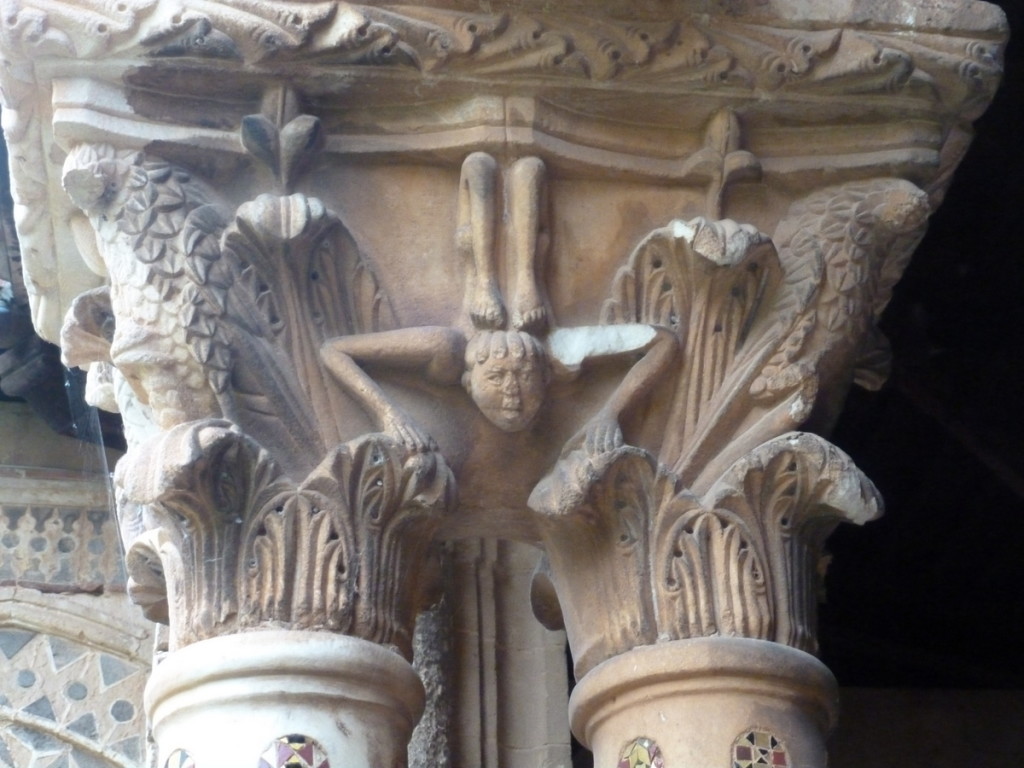 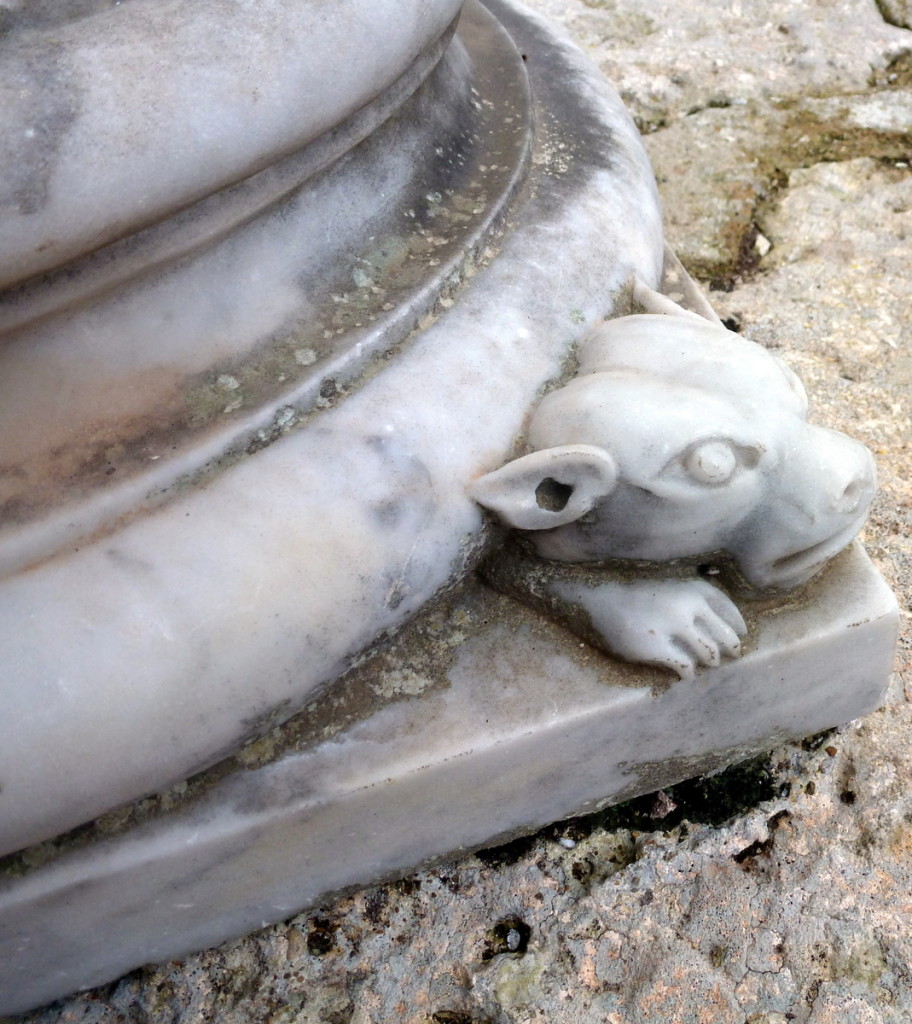 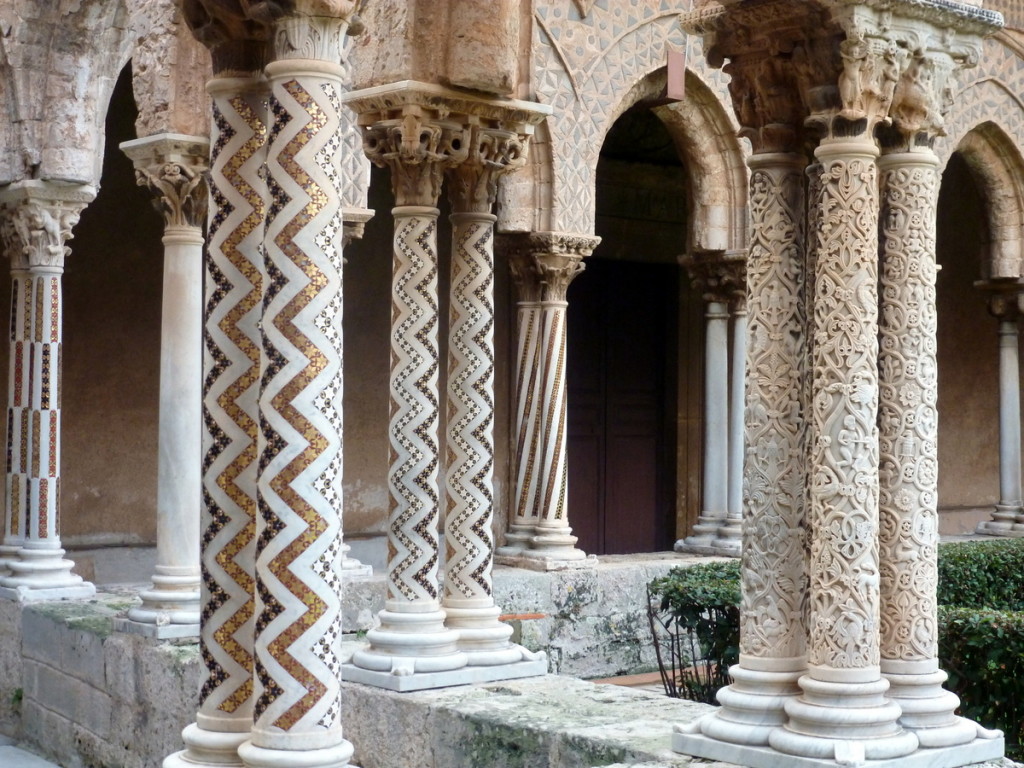 A assortment of columns in the corner with a fountain.

A final view of the exterior of Monreale Duomo 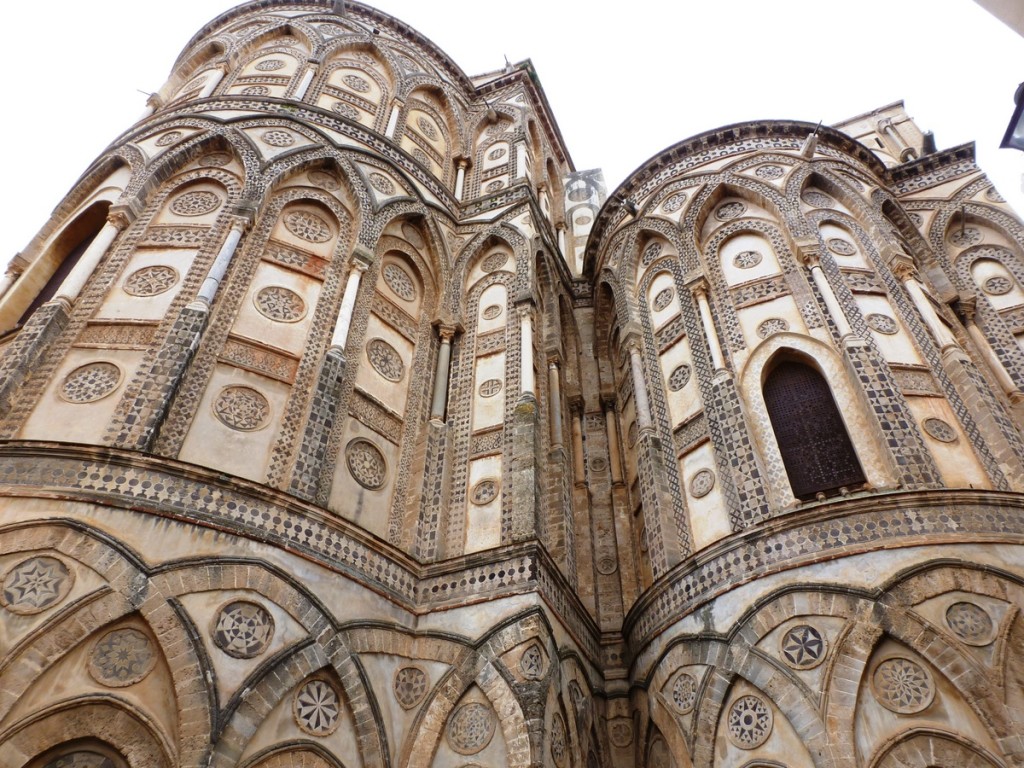