Thanksgiving is a beautiful and psychologically healthy holiday. Imagine, a whole day devoted to thanksgiving. And here’s my grateful list for the year:

1 Roy who is thoroughly enjoying his early retirement, and finding an outlet for his mathematical orderliness in running our house in an orderly fashion, and for his creativity in very creative vegan cooking. Yay for role reversals.

2 Zoe—Who did brilliantly in her A-S’s including getting 100% in Religious Studies, and has got her first University offers. She is enjoying her last year in school, running Crossfire, the school’s Christian Union, and is the form leader.

3 Irene—is thoroughly enjoying school, has a hyper group of 7 friends called “The Motley Crew” and won an Achievement award for outstanding performance in her year-end exams in July. 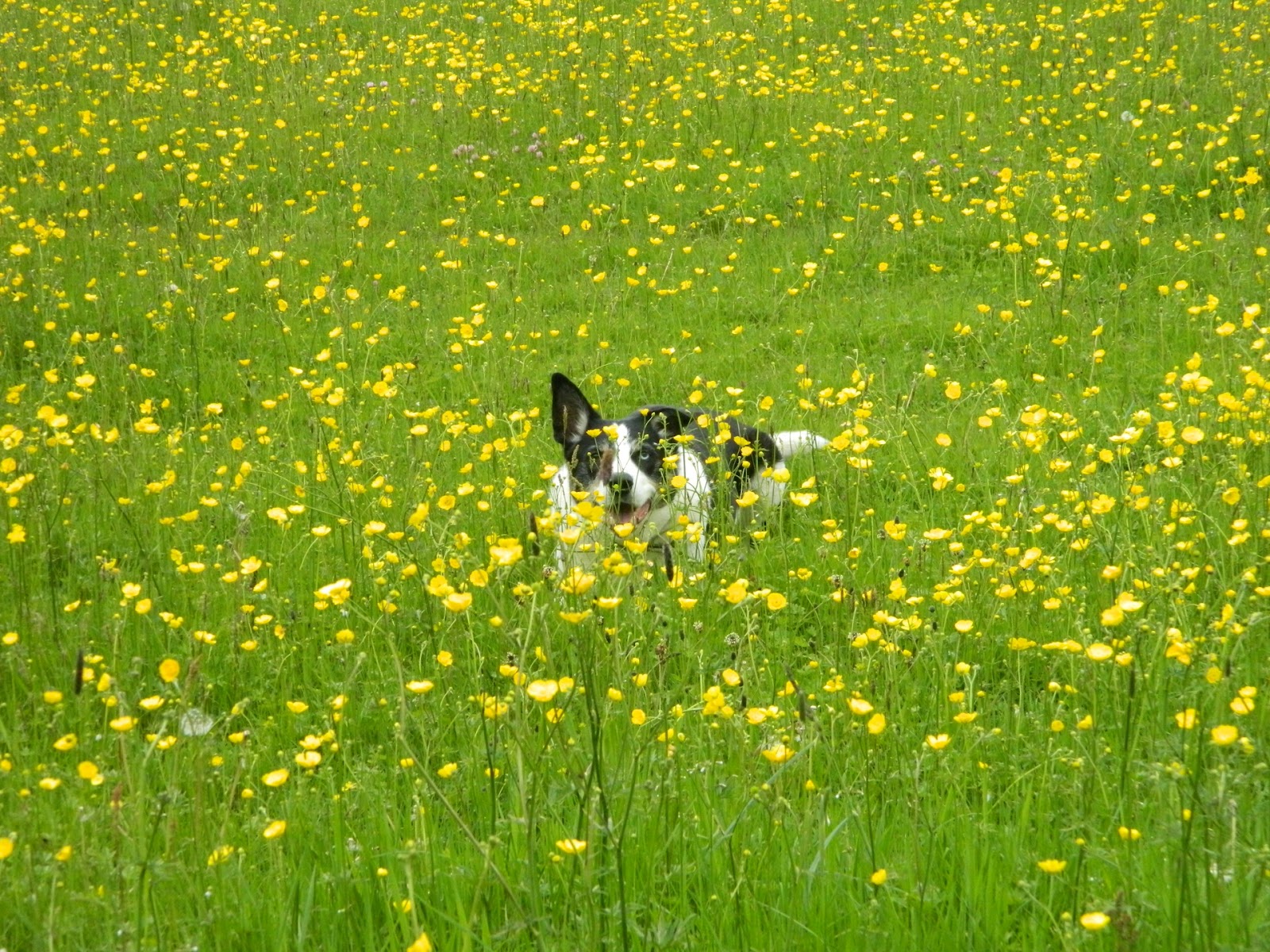 Jake in the buttercups

4 Pets—Jake, my dog, who is with me almost 24/7, and teaches me why dog is such a good anagram for God. My four sweet, friendly rabbits, Empress, Bandit, Sunshine and Lightning. My ducks, who faithfully lay, Buttercup and Daisy, an Aylesbury and an Indian Runner, who are immensely comical and amusing

5 Health—In particular, going vegan on the 4thof November, and losing 8 pounds since then!!
Taking up running.  I’m don’t go terribly fast, or terribly far, but I still find it exhilarating.
“Early” rising–I’ve always wanted to be a lark, but the trouble is I love being a night owl too. Have begun to wake up at 7.35 a.m., which, while not terribly early, is, believe me, earlier that I used to wake up.
I am also going to sleep earlier, and cutting out caffeine after 4 p.m. “Mum, you’ve become so virtuous,” Zoe says.
6 Gardening–Getting back into it. We had let our garden get shaggy and overgrown, but now with the help of Daniel who comes once or twice a week, we are beginning to tame it. Resolution: I shall not let my garden go. Just grow!
7 Reading—I realized last year that I had begun to speed-read and tear the heart out of books rather than reading them, and basically, like many people, was doing most of my reading online; So decided that I was going to finish a book in 30 days in January, 29 days in Feb, 28 in March to get back into the habit of reading. It’s worked. I am now finishing a book in 17 days (though I still have several on the go), and will, God willing, be back to finishing a book a week by April :))

8 Writing has been a deep joy—both this blog, and the memoir I have slowly eased back into writing.

9 Travel—lots of it this year. Ffald-y-Brenin in Wales, the New Forest, magical Istanbul in April, Ireland in June, Denmark in August, and equally magical Luxembourg and Germany in October. (And I’ve worked hard between trips, I promise!!).  I love travel!!

10A St. Andrew’s Church—Love my new church, and love the women’s group I’ve been co-leading this year, though I have just stepped down from leading it as writing is becoming more consuming.

10B Spiritual Adventures–But the most significant things that happened to me this year have been spiritual—and many have happened on our travels.

Receiving healing from adrenal fatigue at Ffald-y-Brenin last December. The prophecy of Patricia Bootsma from Catch the Fire, Toronto (the Toronto blessing church) about Zoe, which changed her outlook and ours in April. Encountering the angel of writing at River Camp in August. Learning about a praise timer, and being filled with the Holy Spirit to bouncing point at a Revival Alliance Conference in September (John Arnott, Heidi Baker, Bill Johnson, Che Ahn). Chatting to Wayne Negrini in Germany in November, who suggested the vegan diet which has helped me sleep 95 minutes less at night, and lose 8 pounds in less than 3 weeks.

Of course, I took the trouble to chase the wild goose of the Holy Spirit, and put myself in the likely force field of God’s presence and power.  Ah, intersecting with God—for that I am so grateful.