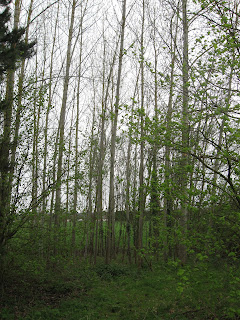 Roy bought a wood chipper for £150, and is now chipping all the branches and twigs I have pruned, and a couple of ornamental trees in sunny spots which we’ve cut down (heresy?) to replace with fruit trees

Hmm. It would cost us £12 a year for the Council to clear one bin of garden waste a fortnight. But how much to buy mulch? Or compost? And how much time wasted in weeding if we did without mulch–which I used to hate in America for its ugliness and unimaginativeness? So instead, we are putting our twigs and sticks and pruned branches, even ivy and leaves into our chipper, and out comes a fine wood shaving mulch, which we’re putting around our plants to keep weeds out.
A good investment? Probably. Because the mulch will become compost sooner or later, another economy.
* * *
When I was a young mum, everyone in my church in Virginia was reading a book called The Tight-Wad Gazette by Amy Dacyzyn. The book promotes frugality so mum can stay home with the kids, and the husband retires early.
Amy’s point of view was that jobs are for dummies, because of the costs of transport, work clothes, lunches out, take-away dinners, stress which means disorganization and items bought to replace lost or broken ones; impaired healthy and immunity. She felt that if a mum stayed home, kept a notebook recording where things were cheapest, shopped for loss-leaders in 4 stores, and practiced frugality, creativity, and ingenuity , then one could manage on a single salary–and eventually no salary.
I found the thought that there was no better use of my time than shopping cost-effectively in numerous stores, buying in bulk and being frugal at home deeply offensive. I used to get so incoherently angry at the suggestion that this was the best use of a woman’s time (and time equals life!) that I probably did not make sense to the other mums who were reading and loving that book, and Mary Hunt’s Cheapskate book which was similarly popular.
(Though interestingly I have not worked outside the home except for a part-time college teaching gig, and Roy did retire at 47.)
* * *
I find an emphasis on frugality stressful and spirit-cramping. When we decided to put our kids in private school and needed serious money, I started a business, a small publishing company. I find it interesting and annoying that the literature aimed at Christian women stresses frugality and ingenuity, rather than some sort of business which employs leveraging (setting your time, talents, skills and money to work so as to earn the highest possible return on them). The former, carried to an extreme, cramps my spirit; the latter I actually enjoy. Entrepreneurship is exciting for me, and creative; seeing opportunities and niches in areas I am interested in, books for instance.
* * *
However, Amy Dacyzyn had lots of nice ideas which we adopted. She says kids have as much fun getting involved in economically productive activities, like gardening or picking berries, as when playing with toys. In making real jam rather than playdough food. Our older daughter didn’t have much interest in the toys we got her–a dollhouse, a large play-kitchen, a train-set, ride-on toys, seesaws, swings–but loved planting, and harvesting things with us (harvesting flowers and veg. far too early, eating chilis raw, but hey, all part of learning!).

Roy began teaching Zoe to cook when she was under three. At first, she stood on a stool, watching him, and the dish while he tidied up. And you could hear her squeak, “Booning, Daddy,  booning,” when the dish began to burn. We impressed the importance of not touching hot dishes; she touched them, of course, and after that would warn us with big wide eyes, “Fire. Hot.” She also chopped veggies with Roy from the time she was three, occasionally cutting her fat little fingers. I grew up with a live-in cook, and first cooked in my twenties, and cut my fingers too–better to get that over with, sooner rather than later, perhaps!
Zoe had as much fun cooking and planting bulbs (“I go help Daddy plant glubs,” she’d run up to explain to me) as playing with plastic toys. She was able to cook soups and pasta by herself at 9, and complete elaborate meals (roast duck with potatoes, stuffing and gravy) at 11. At 16, she is a superb cook, who can whip up anything from a recipe, and feels sorry for her friends who cannot cook pasta or muffins. So some of these theories, that fun can be had while learning life-skills are true.
* * *
To return to that mulcher. Amy had a chart showing two families on a similar income. When there is extra money, one family goes out to eat, goes out to a dinner dance, etc. The other family buys “capital goods” –chain saw, mulchers, composters, sewing machines which they use to save or make money. The life-style of the two families ends up being vastly different. Within a couple of decades, the family who invested in capital goods has foreign holidays, a second home, a swimming pool; the first family, who had more fun in the short run had been riddled with debt all their working life, and landed up with meager savings after a life-time’s work.
I saw that all the time when I lived in America, the life-style contrast between the grasshopper and the ant who earn the same income, more or less. And though the life style of the second family seems so dreary, they have more fun in the end.
* * *
So I suppose wisdom is the mean between extremes. Our family loves travel, and has been to many countries together, and those experiences have been enriching, have taught us much, increased our confidence by having to function in unfamiliar situations and countries, taught us much about human nature, and how to survive when all is strange. Have taught us much about history, culture, and art. Been a source of joy. But one thing I cannot deny: travel is expensive, especially as one gets older, and roughing it is less appealing. Not what Amy’s ant family would have done.

On the other hand, Roy and I hate waste, and for most of the year, try to find pleasure and joy and stimulation as low on the hog as we can–in walks, in nature, in gardening, in reading, in movies, and theatre and art galleries–and even in work!!
* * *

To conclude my meander, I think time is always more valuable than money (provided one is not in debt!)  However, there is also much satisfaction and pleasure in creative economy, I say as I watch the coriander, parsley, salad, beans and zucchini I am growing from seed flourish, and the veg peelings in my composter become dark, rich earth.