Simon Acland has very kindly offered readers of this blog a copy of his intriguing new novel. If you would like to be included in the drawing, do leave your name in the comments section, and  either some way for me to contact you if you are the winner, or check back on Wednesday, 22nd September when I will hold the drawing. 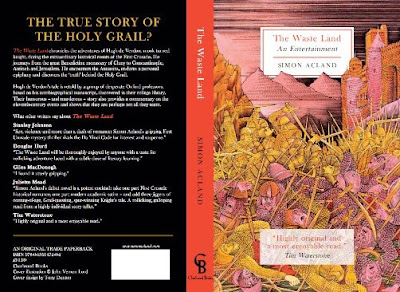 Here’s some more information about this intriguing novel:


The Waste Land chronicles the adventures of Hugh de Verdon, monk turned knight, during the extraordinary historical events of the First Crusade. He journeys from the great Benedictine Monastery of Cluny to Constantinople, Antioch and Jerusalem. He encounters the Assassins, endures a personal epiphany and discovers the truth behind the Holy Grail.
Hugh de Verdon’s tale is retold by a group of desperate Oxford Professors, who discover his autobiographical manuscript in their College library. Their humorous – and murderous – story also provides a commentary on the Eleventh Century events and shows that they are perhaps not all they seem.


And excerpts from a few reviews,

” It is exciting and thrilling and Simon Acland is steeped in this period of history and really knows his stuff. Hugely enjoyable, engrossing and engaging from start to finish. I loved this book and it will be going on my list of Best Reads of 2010.”
Random Jottings 7th July 2010


“To produce a good piece of historical fiction requirs a delicate balancing act between credible period colour and going gloriously over the top. In The Waste Land, Simon Acland pulls this off brilliantly.”
Pursewarden 29th May 2010


“Whether in the depiction of Hugh’s loneliness at Cluny, or the gory battle scenes of the First Crusade, Mr. Acland excels at showing Hugh’s development. Each scene and location is remarkably detailed, and the historical figures are equally fascinating.”
Historical Novel Review 12th July 2010

“This first installment is terrific and we eagerly await the follow-up.”
Brother Judd 24th July 2010

“The Waste Land brings together a number of obsessions of mine – or perhaps obsessions is not quite the right  word. A better way of putting it would be to say that various bits of reading seemed to coalesce when I was thinking about writing the book.

The first ingredient is the Grail. Like the Best-Selling Author in The Waste Land, I was a bad student at Oxford, but one term I did work hard and became enthused by my subject. That was when I was studying the French grail romances of the 12th and 13th Centuries, and Chretien de Troyes in particular. Later, I watched and read with interest and enjoyment the popular Grail books as they emerged – The Holy Blood and the Holy Grail by Leigh, Baigent and Lincoln, Dan Brown’s Da Vinci Code, Kate Mosse’s Labyrinth and so on. But it seemed to me that there was something missing – a link back to the original medieval poems. I thought that it would be fun to write a Grail tale that tried to make the connection.
One of the things which obsesses Grail scholars is how the legends originated. Many of the myths that emerge at different times in different cultures have the same roots. After dinner one night I found myself reading The Waste Land out loud to my children – the realWaste Land, the great Waste Land, that is, T.S. Eliot’s, not mine. The blend of Grail imagery with other myths, and with Ovid in particular, drove me back to re-read Jesse Weston’s From Ritual to Romance, and to Sir James Frazer’s The Golden Bough, and then to Metamorphoses itself. Somehow this resulted in the idea of tying the Grail legend together with Ovid in a story set in the First Crusade. Using the same title for my book, and allusions to it in my chapter titles, and in various places in the text, is really a homage to the great poem, as well as adding a little literary joke to the novel. (There are 23 allusions to the poem in the text if you are looking for them).
I wanted the First Crusade tale to read a little like the adventure stories that I was brought up on and still re-read often – Anthony Hope’s The Prisoner of Zenda, John Buchan’s Greenmantle, Henry Rider Haggard’s King Solomon’s Mines, for example. If you know those books you may recognise genuflections to each of them in my story. To please my children I also promised them a reference toMonty Python and the Holy Grail. But medieval French is less well known and I did not want to lose the connections to the Grail legends.
That’s why I came up with the device of the Dons’ story. Some of the friends who read the book before I published it liked the Dons. Some did not. If you don’t, just ignore the Saint Lazarus’s College sections and read Hugh’s story. It stands by itself. But I decided to leave the Dons in, because for me they add another dimension. I thought that if they were commenting on some of the literary origins of the story they could talk a little about the history behind it. I have read many historical novels where I have asked myself part way through ‘did it really happen like that?’. Some of the events of the First Crusade are so extraordinary that they are hard to believe and I wanted the Dons to point up some of the background. I also wanted them to inject a bit of humour into the story and dilute some of the blood and battles. In part some of the parallels with Hugh’s story poke gentle fun at the ‘time slip’ novel genre. And in part they are meant to confirm that Hugh’s story should not be taken too seriously.”


If you would like to be included in the drawing, do leave your name in the comments section, and either some way for me to contact you if you are the winner or check back on Wednesday, 22nd September when I will hold the drawing.