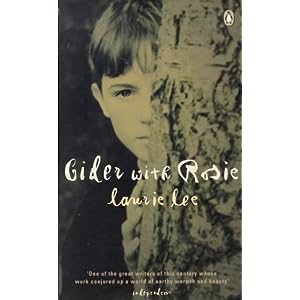 Cider with Rosie by Laurie Lee

I am in the second or third draft of my own memoir, and have finally solved the problem of structure, I believe.

However, when you come across a memoir whose structure is sheer genius what can your jaw do but drop?

I have loved Cider with Rosie for well over a decade. Laurie Lee’s writing in patches is so exquisite, so perfect, it almost makes me want to cry with pleasure. He writes of his mother, of her invincible childlike gaiety and good nature, a kind, noble soul, betrayed and abandoned by the husband who was the love of her life, whose sudden death tilted her over into dementia, “Her flowers and songs, her unshaken fidelities, her attempts at order, her relapses into squalor, her near madness, her crying for light, her almost daily weeping for her dead child-daughter, her frisks and gaieties, her fits of screams, her love of man, her hysterical rages, her justice towards each of us children – all these rode my Mother and sat on her shoulders like a roosting of ravens and doves.”


Rilke writes to a young poet, “If your daily life seems poor, do not blame it; blame yourself, tell yourself that you are not poet enough to call forth its riches; for to the creator there is no poverty and no poor indifferent place.” Lee’s childhood was provincial, disadvantaged, poor. There was no Eton-Oxford hothouse, no indication that he should or would become a writer. Yet become one he did.


His childhood was lacking in the events which might provide a biographer’s chapters, unlike say Thomas Merton’s or Vladimir Nabokov’s, (two writers I’ve reviewed on this blog.) He therefore constructs his memoir as self-contained essays. “First Light,” setting the scene in his cottage in Gloucestershire, “First Names,” describing his family, and the characters of his village; “The Kitchen,” “Village School,” very mediocre at best, full of eccentric teachers; “Public Death, Private Murder,” of a murder of a bragging Kiwi, over which the entire village was complicit, and silent; Seasons, Relatives, Sex.


All the staples of memoir–but irradiated and backlit by prose which, as Walter Pater says is true of all art, “aspires to the condition of poetry”. Never to be forgotten, that first long secret drink of golden fire, juice of those valleys and of that time, wine of wild orchards, of russet summer, of plump red apples, and Rosie’s burning cheeks. Never to be forgotten, or ever tasted again… The old people in his village are “ – white-whiskered, gaitered, booted and bonneted, ancient-tongued last of their world, who thee’d and thou’d both man and beast, called young girls ‘damsels’, young boys ‘squires’, old men ‘masters’, the Squire himself ‘He’ and who remembered the Birdlip stagecoach, Kicker Harris the old coachman…”


I have read it a couple of times, and listened to it read by Laurie Lee himself a couple of times. I would highly recommend the audio version. What Laurie heard in his head as he wrote Cider was music, the music spoken with a soft Gloucestershire burr, and the listening to the roll of his sonorous cadences is a delightful and memorable experience.