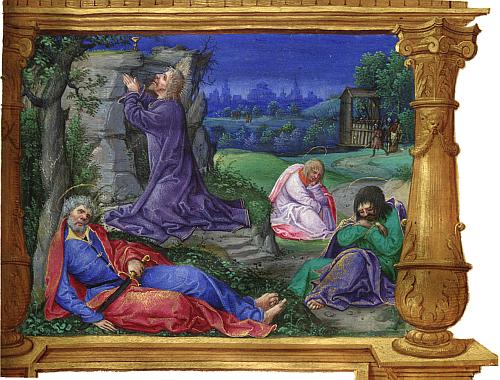 47 While he was still speaking, Judas, one of the Twelve, arrived. With him was a large crowd armed with swords and clubs, sent from the chief priests and the elders of the people. 48 Now the betrayer had arranged a signal with them: “The one I kiss is the man; arrest him.” 49 Going at once to Jesus, Judas said, “Greetings, Rabbi!” and kissed him.
50 Jesus replied, “Do what you came for, friend.”
Jesus at his most unfathomable–gentleness and kindness shown to the one who impelled by his own greed, doubt, and inner divisions has betrayed him (which Judas will soon regret).
Jesus has run through the gamut of human experience–the unimaginable pain of the knife twist of betrayal. The kiss, the customary way for friends in ancient and modern Israel to greet one another now becomes the means of betrayal,
Then the men stepped forward, seized Jesus and arrested him. 51 With that, one of Jesus’ companions reached for his sword, drew it out and struck the servant of the high priest, cutting off his ear.
Peter, the impulsive one
52 “Put your sword back in its place,” Jesus said to him, “for all who draw the sword will die by the sword.
A chastening thought. Jesus does not approve of violent means to achieve our ends. Because we live in his Father’s kingdom, and his Father, in his own time, can send legions of angels to rescue us.
53 Do you think I cannot call on my Father, and he will at once put at my disposal more than twelve legions of angels? 54 But how then would the Scriptures be fulfilled that say it must happen in this way?”
Jesus is the willing sacrifice. He suggests that if at any point, he had said, “No. I have changed my mind,” his Father would yet have rescued him.
72,000 angels. A Roman legion at full strength had 600 soldiers.
55 In that hour Jesus said to the crowd, “Am I leading a rebellion, that you have come out with swords and clubs to capture me? Every day I sat in the temple courts teaching, and you did not arrest me. 56 But this has all taken place that the writings of the prophets might be fulfilled.” Then all the disciples deserted him and fled.
Jesus mildly protests the manner of his arrest. The crowd sent by the Sanhedrin had come after him as if he were a dangerous criminal or insurrectionist. And then he again reiterates his surrender to his Father’s will.

The disciple’s courage failed faced with the large crowd “armed with swords and clubs.” Death or severe injury was likely. And arrest. Who can blame them?

The great crowd consisted of a detachment of Roman soldiers, assigned by Pilate to the temple for security, who were carrying swords, and Levitical temple police and personal security of the chief priests and Sanhedrin (elders) carrying clubs.
Read my new memoir: Rosaries, Reading, Secrets: A Catholic Childhood in India (US) or UK.
Connect on Facebook: https://www.facebook.com/anitamathiaswriter/
Instagram: https://www.instagram.com/anita.mathias/
Twitter: https://twitter.com/AnitaMathias1
My book of essays: Wandering Between Two Worlds (US) or UK