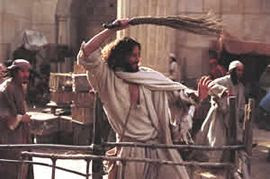 A friend of ours has a daughter who is disabled, autistic, and has a fiery temper. When asked to chose a Bible story, she asks for the “Jesus angry” stories.


In the past, when I have been angry with another Christian, and told them what I think of their behaviour, a third Christian has often asked me, Well, what would Jesus do? And sometimes, a likely answer is, “He would be angry.”


Jesus entered the temple courts and drove out all who were buying and selling there. He overturned the tables of the money changers and the benches of those selling doves. 13 “It is written,” he said to them, “‘My house will be called a house of prayer,’[e] but you are making it ‘a den of robbers.’[f]”

Jesus was obviously a strong, physically power man, with charisma. One man, single-handedly chasing away those who were buying and selling, overturning the tables of the money changers, and the benches of those selling doves. The buying and selling took place in the large outer court of the Gentiles, which covered several acres. Jesus was probably particularly annoyed that this took place in the area set apart for the Gentiles to pray.


What chaos, what a hubhub!


Because increased money gives power, and the power to fulfill fantasies, and to boost one’s profile, church, in the hands of the less scrupulous will be accompanied by requests for money, sometimes legitimate, sometimes to fulfill private visions, dreams, and ego-boosting plans and fantasies.
Thieves used caves to store their loot, and plan future crimes!
Read my new memoir: Rosaries, Reading, Secrets: A Catholic Childhood in India (US) or UK.
Connect on Facebook: https://www.facebook.com/anitamathiaswriter/
Instagram: https://www.instagram.com/anita.mathias/
Twitter: https://twitter.com/AnitaMathias1
My book of essays: Wandering Between Two Worlds (US) or UK