Timothy Egan on American politics and life, as seen from the West.

ALAN FURST, CLINT EASTWOOD, HERMAN MELVILLE, HILLARY CLINTON, JAMIE MOYER,JOHN HUSTON, LATE BLOOMERS, MARK TWAIN,NORMAN MACLEAN
I used to be a connoisseur of stories about young, doomed geniuses: the F. Scott Fitzgeralds or Vincent van Goghs who died early, broke and crushed, going to their graves before anyone appreciated them. Doomed alcoholic youth were even better, an added edge to their stunted nobility.
A few weeks ago, my colleague Sam Tanenhaus wrote about young writers doomed in another way: those who never lived up to the promise of their early years. Perhaps many young writers now seen as ascendant have actually peaked. He mentioned Herman Melville, delivering “Moby-Dick” at age 32, and the 27-year-old author of “The Sun Also Rises,” Ernest Hemingway.
But those stories, like the doomed youth parables, no longer hold any inspiration for me. I now look to the late bloomer, somebody who kicks around in frustration and misdirection for decades before going on a brilliant late-innings streak.
When does creativity peak? The second-act aces make a case for middle to late age. Take a look at some of the people who have not simply performed well but done their best work in their later years. 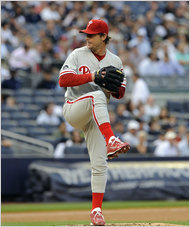 Barton Silverman/The New York TimesJamie Moyer
For an athlete who must innovate with age, time is rarely an asset. The 40-year-old Ken Griffey Jr., struggling to keep his batting average above .200 this year just before he retired, was a pathetic sight. And Brett Favre, even with the feat of being the first starting quarterback to win an N.F.L. playoff game at the age of 40, looks time-worn and sluggish when compared to his younger self.
But then there is Jamie Moyer, the slow-throwing tosser for the Philadelphia Phillies who at 47 this year became the oldest pitcher ever to beat the Yankees. Almost 20 years ago, Moyer was told he was through — to get out of baseball. That was followed by 10 productive years in Seattle, where I watched the ageless Moyer befuddle the steroid-bulked behemoths of the performance-enhancing-drug age.
His advantages were experience, deception, guile — skills that usually come with added years on the odometer. He could be the athletic prototype for the kind of late-season bloomer that Malcolm Gladwell described in a New Yorker piece on great second acts. For endeavors that require knowledge of craft, and constant experimenting to get it right, age may actually be a benefit, Gladwell said.
You can see that in certain filmmakers. Much as I loved John Huston’s early work — “The Maltese Falcon” and “The Treasure of Sierra Madre” are superb entertainments — the last film of his life, an adaptation of the James Joyce story “The Dead,” is cinematic art of the highest form. At the age of 80, Huston directed the picture from a wheelchair, with oxygen tubes running up his nose.

Armando Arorizo/European Pressphoto AgencyClint Eastwood holding his Oscars for Best Director and Best Picture for “Million Dollar Baby.”
The king of geriatric film genius has to be Clint Eastwood, who turned 80 in May. Starting with “Unforgiven,” when he was 62, Eastwood created at least five masterpieces (my favorite is “Mystic River”), including two that won the Academy Award for Best Picture. And his films are popular, as well. With “Gran Torino” he became at 78 the oldest leading man to reach number one in weekend box office.
In politics, experience often makes for better, more creative leaders. The Hillary Clinton who roams the globe as Secretary of State at 62 is a much better politician, and diplomat, than the policy-making 40-something who had trouble controlling her temper, or getting the results she wanted. Her best work would seem to be ahead of her. 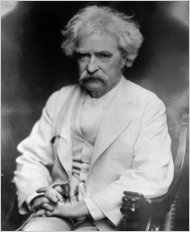 Associated PressMark Twain
Teddy Kennedy at 70 was a master of the Senate, and light years in legislative creativity ahead of the callow youth who entered the chamber back in 1964. Because the Senate can be a pampered nursing home, many politicians go the other way. Think of John McCain, once the great maverick, becoming ever more cranky, partisan, narrow-minded and petty with every passing day.
Writers are a tough call. For every J.D. Salinger, who published “The Catcher in the Rye” when he was 32, there is a Mark Twain, who brought out “The Adventures of Huckleberry Finn” at 49. “Huck Finn,” Hemingway said, is the foundation for all modern American fiction, and I agree.
Alan Furst, the literary spy writer who produces atmospheric thrillers every other year or so, is at the top of his game at 69. When he moved to France in 1987 he had yet to make a mark. “I was going to be the best failed novelist in Paris,” he told John Marshall in a Daily Beast piece last year.
Nobody was a better American essayist in the 1970s and 80s than Joan Didion. But the writerly sprint culminating in her late-years memoir “The Year of Magical Thinking” was breathtaking. She finished the book just days after her 70th birthday.
My favorite septuagenarian inspiration is Norman Maclean, who published the most beautiful, word-perfect novel of the American West, “A River Runs Through It,” when he was 74. And then he had a second book in him, “Young Men and Fire,” published after his death at 87. Old, seemingly doomed, and brilliant — a role model for all second-act aces.
Read my new memoir: Rosaries, Reading, Secrets: A Catholic Childhood in India (US) or UK.
Connect on Facebook: https://www.facebook.com/anitamathiaswriter/
Instagram: https://www.instagram.com/anita.mathias/
Twitter: https://twitter.com/AnitaMathias1
My book of essays: Wandering Between Two Worlds (US) or UK